Is anyone else as entertained as I am by the fashion show being put on by Jill Kelley? Kelley is the 37-year-old woman whose complaint about half-a-dozen anonymous emails set off the FBI investigation that ended the career of CIA director David Petraeus. Besieged by press at her home, in Tampa, Fla., she’s stepping out in bright dresses that make it clear why both military and law-enforcement men turned into heat-seeking missiles around her. Scandal is her catwalk, bitches! WERQ, Jill! 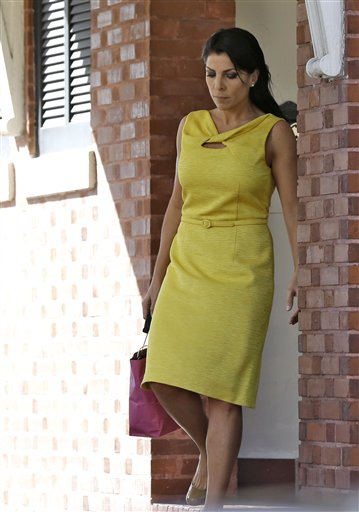 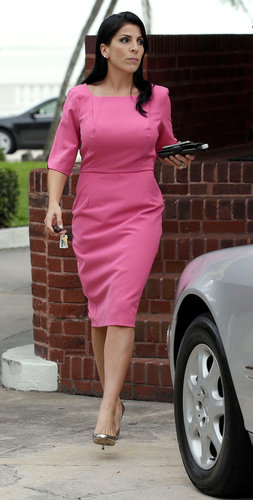 Photo by Chris O’Meara/AP via the New York Times. Click for source.

I vote for cobalt blue next.

I’m hoping the dress designer/s will send out the classic press release that all of us send when one of our pieces is in the public eye: “As seen on Jill Kelley.” Come on, designers! You have to go there. Lindsay Lohan’s tight, white Kimberly Ovitz dress sold out when she wore it to plead not guilty to felony grand theft, and this story is so much sexier. Honestly, Lindsay wishes she looked as good as Jill Kelley these days.

It’s been an impressive week for sex scandals: Petraeus; Gen. John Allen, the top American commander in Afghanistan; and Elmo the Muppet have all been dragged into one. The first two are linked, of course. Petraeus had an affair with his biographer, Paula Broadwell, that was exposed by the jealous emails she sent to Kelley. Meanwhile, Kelley was exchanging flirty emails with Allen. The Muppet affair is a separate story. Elmo puppeteer Kevin Clash, now 52, was accused of having sex with a 16-year-old boy seven years ago. The 23-year-old who made the accusation has since recanted, saying it was an adult and consensual relationship. That’s a relief, because we don’t need anymore of Jerry Sandusky-type awfulness.  Elmo’s true situation is the same as the CIA/military story: sexy times between adults that I really, really wish I didn’t know about. What I do want to know is where are all the people screaming, “This will set men back a hundred years!”? When one woman acts the fool, I often hear that she’s sent all of us women back to the Stone Age, even though I don’t recall ever voting to have her represent me. Here we have three men playing into the totally unfair stereotype that dudes create a lot of havoc by thinking with their penises, yet no one is saying that they’re setting back their “cause.” Humph. Seems unfair to me.

Also bothersome? The fact that the FBI has so much time to snoop through online communications that were of no obvious importance (though the consequences of airing that dirty laundry have been dire). Since the G-men have so much time on their hands, I demand that they investigate this blog comment I got yesterday. The way this guy abused commas sets ALL punctuation back a hundred years!

UPDATED NOV. 15, 2012, TO ADD: The identity of Clash’s accuser has been revealed and who better to tell that story than the highlarious Michael K of Dlisted?

You might also like
The Week in Review, Plus Reaction to Weinstein
Never Again Is Now: D.C. March and Alternatives
Angelina Jolie's Decision
Previous Post: « What Wendy Wore: Madonna at Madison Square Garden
Next Post: What Wendy Wore: Elevator Talk With Anna Wintour »