So much happened at Tuesday’s International Press Freedom Awards Dinner for the Committee to Protect Journalists, that it has taken me three posts to cover it. My first post was about the vintage gown I wore. The second post was about CPJ’s mission and the dinner’s awardees. Now it’s back to the lighthearted stuff: party guests!

Alice Forbes Spear of CPJ always stands out in a crowd. In 2008, her homemade dress caught my eye. This year, I told her that she looked like a goth music-box ballerina.

Alice at the Waldorf-Astoria.

Alice said her skirt is by Dolce & Gabbana. The top was originally a Chloe dress that she altered. The crinoline is a little girl’s tutu from a children’s clothing store. Speaking of little girls, Alice was especially pleased that her outfit had done double-duty: she’d worn it on Halloween as a JonBenet Ramsey costume. She did style it differently for the CPJ dinner, opting to go without the strangle marks that she’d painted on for Halloween.

Habiba Nosheen of MrB’s organization, ProPublica, designed her own dress and had it made by her mother-in-law’s tailor in Pakistan. 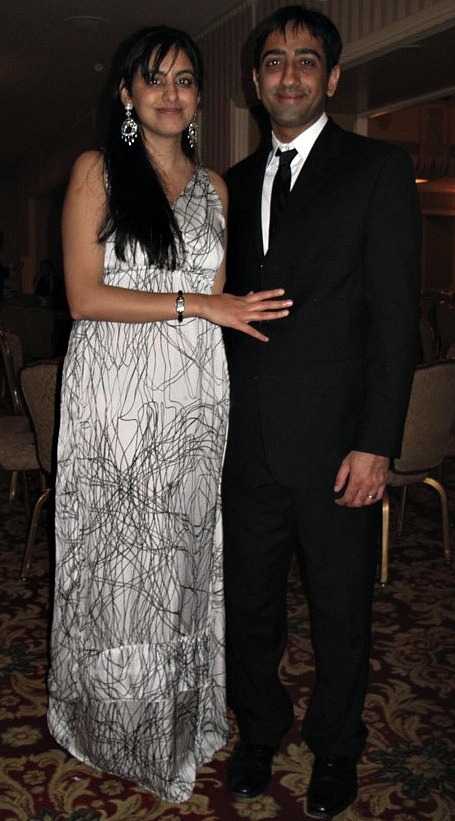 Habiba and her husband Amar Lohana.

The tailor said, “I hope this is a nightgown because I can’t imagine a woman wearing it in public.” Ha! Love it. Imagine what he would say if he saw my backless ass-flower gown.

There were lots of other ProPublica peeps there. Lois Becket of ProPublica came with her friend Noah Rosenblum. 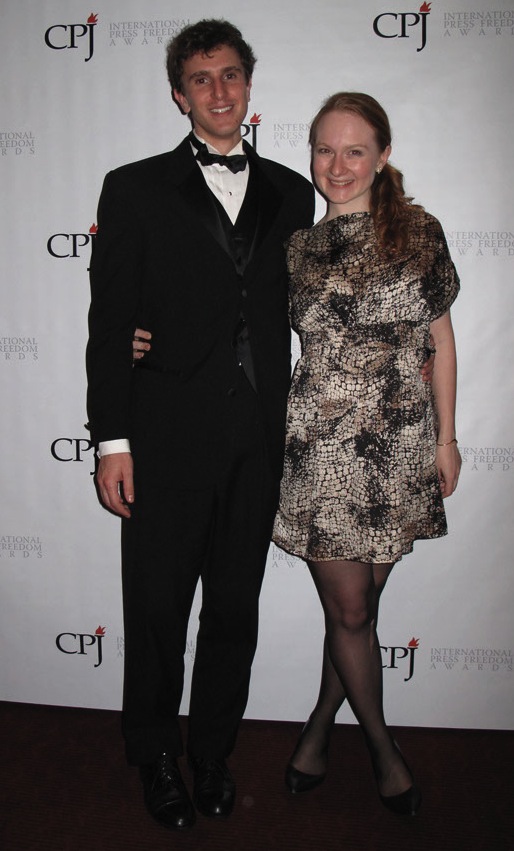 I think Lois has been studying my cross-legged pose.

Nicole Cabrera of ProPublica came with her boyfriend Teddy Blank. 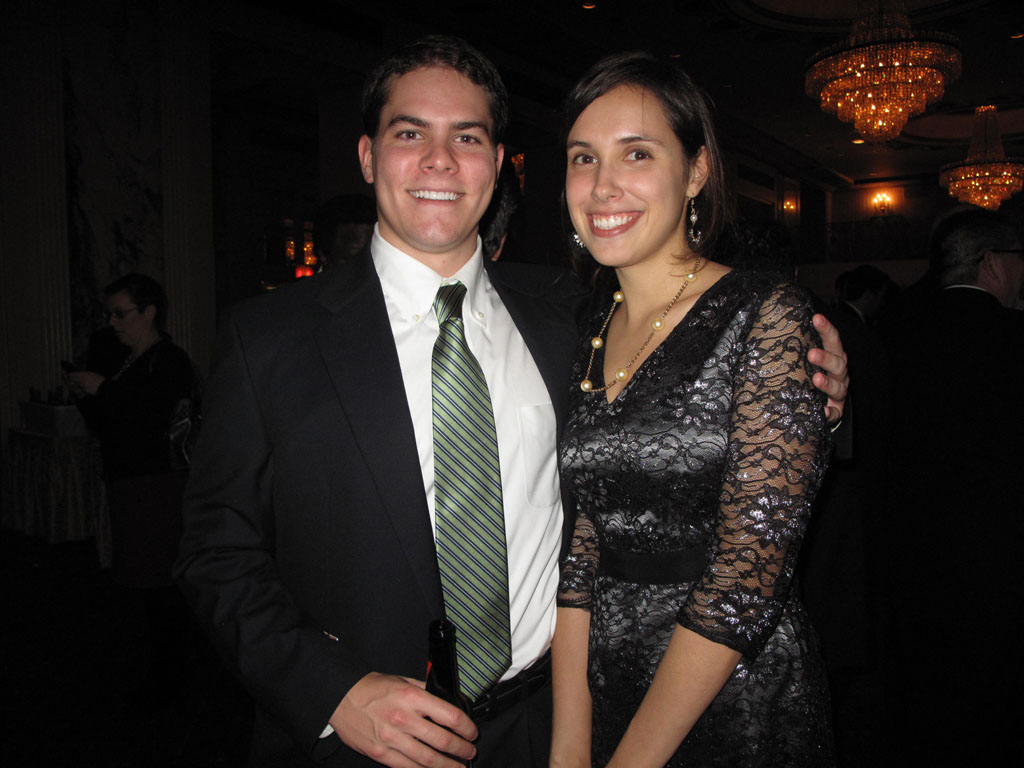 Liz Day of ProPublica came with her husband Brian Long. Here they are with Liz’s colleagues Marian Wang and Sergio Hernandez. 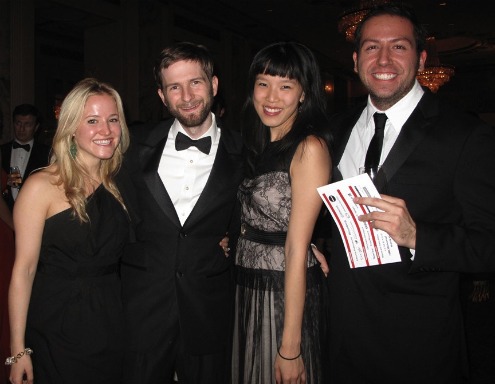 Liz, Brian, Marian and Sergio. I yelled at Sergio to smile and he really came through for me!

MrB looked very dapper in his tux and a pair of WendyB-designed Medici cufflinks. He also looked very relaxed, because his successful, six-year term as CPJ chairman came to an end earlier this year. He didn’t have to give a speech. His only job was to pose with former CBS news anchor Dan Rather, the winner of CPJ’s 2011 Burton Benjamin Memorial Award. 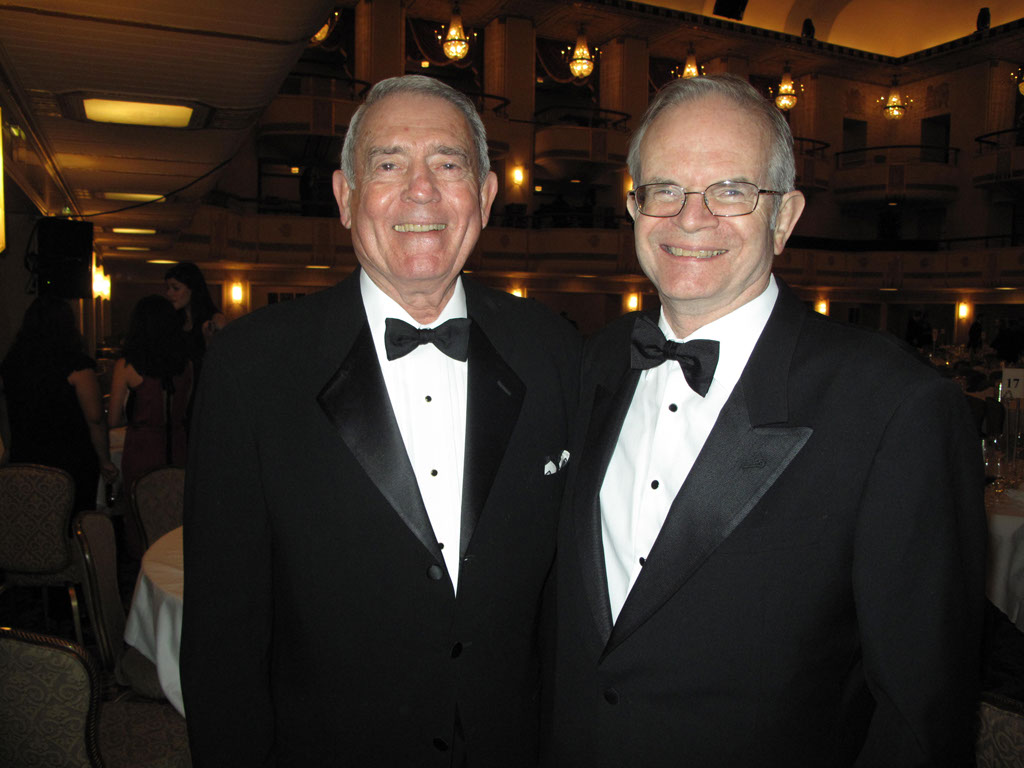 Dan on the left, MrB on the right.

Taking this photo gave me a bad flashback to my two mortifying experiences with NBC’s Tom Brokaw. Tom has been parodied on the animated show Family Guy, which I watch obsessively.  For years, I begged MrB to ask Tom if he knew about the Family Guy episodes. He didn’t, so when I saw Tom myself in January 2010, I took matters into my own hands. Then, in July, there was That Awkward Moment. You know that moment — the one where you remind the famous news guy that you’re the fool who asked him about some TV show he’s never heard of and you can see he’s thinking, “Lady, just take my picture and move on.” THAT moment!

I thought of all that because Dan Rather’s sibilant speech has been parodied on Family Guy. 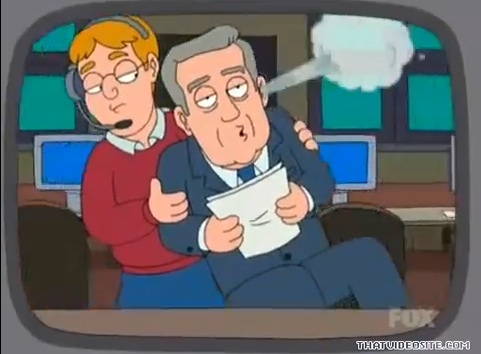 I’m proud that I said nothing about it!

You might also like
Great Minds Think Alike ... About Stripes
My Best Dressed at the 2017 Golden Globes Is ...
Charlie Hebdo: "L’amour: Plus fort que la haine"
Previous Post: « Giving Thanks for Press Freedom
Next Post: Photo by Bill Cunningham of the New York Times »