When I saw this picture of a “Bias Streamer Skirt” by Alexander Wang in last weekend’s Wall Street Journal, I screamed (in my head), “Car-wash skirts are back at last!” 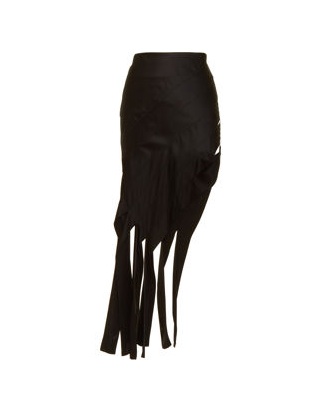 I didn’t know I was missing car-wash skirts, but apparently, deep down, I was. If I remember correctly, car-wash skirts — so-called because the fringe-like panels look like the equipment in an automated car wash — had a big moment in the early ’90s. I know I had one then.

Car-wash skirts have turned up occasionally since that time, but now I believe they’re poised to have a big moment. People are used to asymmetrical hemlines thanks to the popularity of the high/low hemline (aka the mullet skirt/dress), and the car-wash look is really just a variation on the “now you see my legs, now you don’t” concept. The fact that the influential label Rodarte showed a car-wash skirt in September 2010 as part of the spring 2011 collection is another sign that the style might be about to blossom into a trend. The New York Times blog post on that show noted that the car-wash look was hot in the 1960s. Another website says the style was also popular in the 1920s, although it was called a “petaled” hemline then. I reject the fashion axiom that if you wore a trend the first time around, you’re too old to wear it again, so I hope to bump into some 110-year-old ladies sporting their ’20s petaled skirts. Talk about Advanced Style!

If you can’t decide between a mullet or car-wash skirt, the Wang skirt shown above is a good choice because it’s both! Here’s another view.

It’s not just car-wash fashion that has resurfaced repeatedly. The 1976 No. 1 hit song “Car Wash” — the theme song of a movie of the same name — was covered in 2004 by Christina Aguilera and Missy Elliott for the soundtrack of the animated movie Shark Tale. Unlike the original, the 2004 version didn’t crack Billboard’s Top 40. But how many other songs mention tuna fish? Not enough, I say! Enjoy.

You might also like
Life Begins at 40, Eminem!
Gwen Stefani on Vogue's Cover
Madonna, 10 Years Ago Today
Previous Post: « What Wendy Wore: Golden Girls Gang Does Vegas
Next Post: Drawing the Line at the Cutout Herve Leger Dress »