For audio frights, check out my recently promised murderous playlist at 33 avenue Miquelon.

For visual terror, yesterday’s New York Times had a feature called “When the City Was a House of Horrors.” It’s about John Conn, who photographed the New York City subway system in the late 1970s and early 1980s, which was a very scary time in New York. I’m not sure if my favorite historian, Barbara Tuchman, was referring to New York in particular when she wrote the foreword to her 1978 book, A Distant Mirror: The Calamitous 14th Century, but her words are as good a description of that period of the city’s history as any (the bold emphasis is mine):

It was during that era that I decided I wanted to live in New York City. While you ponder the perversity of that, I’m going to John Conn’s website to buy a print of his photo of a knife being dangled out of the window of the No. 6 train. 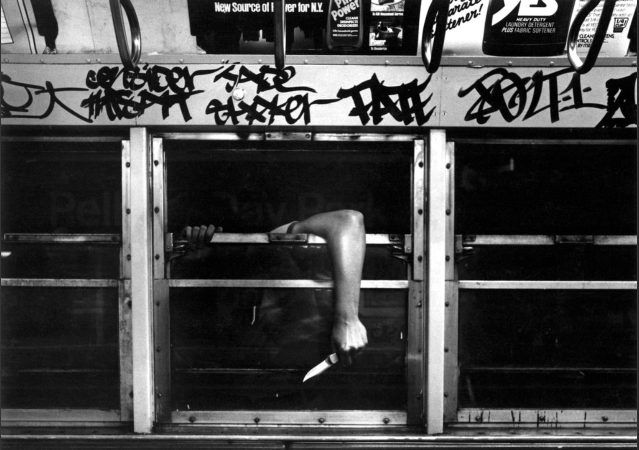 The Times said Conn was at the last stop on the No. 6, in the Bronx, “when he heard a laugh, followed by, ‘Hey — yo, this be a good photo!’ Then he saw a hand clutching a blade through the window.” This is the kind of image that will be a treat to look at every day. I’m not tricking you.

You might also like
Throwback Thursday: Red Alert
Makeup Attacks ... and Is Attacked
Why Don't You Choke on a Fashion Accessory?
Previous Post: « What Wendy Wore: Stacy Lomman Dress for Tina’s Birthday
Next Post: Happy Rick-Ross-o-Ween! »