In July, when the price of gold hit new high after new high, I did a “Get Smart” post about it: why gold cost so much, why there is no “cheap” gold, and why the smart money doesn’t invest in a commodity just because it’s hitting new highs.

After that post, the gorgeous and well-rounded Susan Tiner, who is a financial organizer/consultant-turned-style blogger, forwarded me a newsletter by Daniel P. Wiener, the chief executive officer at Adviser Investments in Newton, Mass., which manages $2.3 billion in assets. Dan made some calm, cool and collected remarks about gold.  Surrounded as I was by would-be metal investors panicked by apocalyptic fears and television talking heads such as Jim Cramer and Glenn Beck, I decided to give Dan a call for one more rational perspective on investing in gold.

I immediately knew that Dan was my kind of guy when he said, “My comment on gold is it looks best around my wife’s neck.” In other words, it’s nicer as a necklace than as an investment. 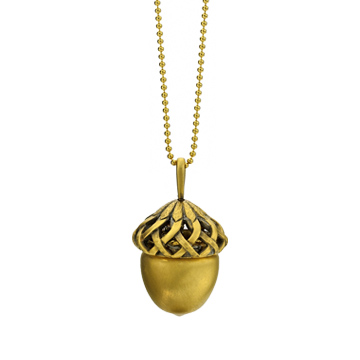 I agree with Dan! Click for more information on my 18K gold acorn necklace.

His major point was that gold isn’t the inflation hedge it’s made out to be. “It’s anything but,” he said. Inflation is an increase in the price of goods and services over time. As prices go up, each dollar in your pocket buys less of those goods and services. A common perception is that the value of gold will track inflation. But this is only sometimes true. Dan noted that during the last gold rush, back in 1980, gold hit a high of $875 an ounce (it then fell to a much lower level where it stayed for more than 20 years). Adjusted for inflation, that $875 is worth over $2400 in today’s dollars. The day I spoke to Dan, gold was trading at about $1614 an ounce, even though people have been predicting for the past several years that the inflation-adjusted figure would soon beat the 1980 high. “Gold at $1614 is far from having matched inflation over the course of time,” he said. “So No. 1, it’s not an inflation hedge. Number 2, gold doesn’t earn interest, doesn’t pay dividends, and if you buy the raw commodity you have to find a place to store it.”

He also warned that when gold stops rising and “goes the other way, it can go the other way very hard and very fast,” particularly due to the trading activity of hedge funds. A hedge fund is a private investment partnership. (Dan said, “There’s a little bit of an aura around hedge funds because they’re limited to high-net-worth [investors]. People think if it’s a hedge fund, it’s got to be good — sort of like the country club that doesn’t let everybody in.”) He said a hedge fund charges “higher-than-normal fees with the expectation that you’re going to earn higher-than-normal returns. In order to make up for these huge fees and keep your clients happy, the hedge fund manager looks for ways to invest a dollar and buy two, three, four dollars worth of assets with that dollar. You can do that in the options markets by buying options or contracts on commodities like oil and gold. These can be leveraged up. If lots of people are looking for leverage, and they buy this, the price is going to go up. When they decide to leave, it’s going to be pretty messy.”

What Dan is saying there is that hedge funds make big investments with borrowed money, also known as leverage. Their own purchases increase demand which contributes to rise in the price of gold. Then it’s easy for the individual investor who watches Jim Cramer or hears one story on NPR or reads one story in the Wall Street Journal to think that this signifies something fundamentally strong about gold as an investment: we’re about to run out of it or that it’s good for fending off zombies. But what if the hedge funds who have propped up the gold price all sell their gold at the same time? They might do that if the institutions that loaned them money in some form or another get worried about their business and demand that the loans be paid back. Suddenly gold is no longer in such demand. Would you pay top dollar for something that’s easily obtainable or that you don’t want that badly? No. That’s why prices go down in that scenario.  A 2007 Wall Street Journal article about hedge funds and leverage explained this as it would affect stocks and bonds, “When markets turn bad, leverage can create a snowball effect. Lenders … demand that investors provide them with more collateral — the stocks, cash, or other assets they pledge to cover potential losses. Sometimes investors dump stocks and bonds to raise cash. Prices drop more, losses accelerate, and more selling ensues.”

An example of this happening with metals occurred in 1980, when the billionaire Hunt brothers decided to corner the market on silver with borrowed money. The more they bought, the higher the price of silver went. Finally, regulators just said “no” to people buying so much silver with borrowed money. The Hunts’ lenders said, “Guess you have to pay us back that $100 million you can no longer have invested in silver, bitches.” Probably not in those words, but who knows? The Hunts had to dump lots of silver as the price went down, down, down. The more they sold, the lower the price went, just like it had gone up as they bought. Ultimately they filed for bankruptcy protection thanks to this scheme.

Basically, the small investor better have exquisite timing lest s/he get swept up in these larger movements. That brings us back to the “greater fool theory” that Stephen Wood, chief market strategist, North America, for Russell Investments, described in my previous post: “People who buy only rapid price momentum, suspecting or not caring that fundamentals don’t warrant that price — they are hoping that someone (some buyer) will pay an even higher price than they did in hopes of finding an even greater yet fool.” I should add that even if loans aren’t called in, the smart investor — especially the institutional investor who studies markets for a living — may simply want to lock in profits by selling. If enough people do this at the same time, their sales would also knock an investment off its high.

Dan compared gold’s rise to an oil-price bubble in 2008. A bubble is an investment situation when a stock, commodity or other item is trading at a much higher price than warranted. It’s probably easiest to understand in terms of the 1995 – 2000 “dot-com bubble.” People were so excited about the Internet that they didn’t care if companies didn’t know how to make money. They wanted to invest regardless! The sky was the limit for the Interwebs! Pets.com might have been the most notorious, because the online pet-supply company had a high-profile ad campaign starring a cute sock-puppet mascot. The company even bought an expensive Super Bowl ad.

But behind the scenes, Pets.com was selling products for less than it paid for them. As I pointed out in June, that’s not a good business plan. Nine months after the company’s initial public offering of stock, Pets.com was out of business.

Back to the oil bubble! I’ve never followed the oil markets closely, so I Poodled the topic. I saw articles asserting that there was no bubble and that the high oil price wasn’t influenced by investors but by real supply and demand. I decided I needed to talk to an oil expert of my own. As I searched for one, the price of gold kept rising, till it broke $1900 an ounce in August. A few days later, while bracing myself for a zombie attack, I spoke to the highlarious Tom Kloza, chief oil analyst for “forever” with Oil Price Information Service, which provides petroleum pricing, news and analysis. OPIS is based in Wall, N.J., where, Tom told me, famous hooker Ashley Dupre used to live.

“I think without question it was a bubble,” Tom said of oil prices in 2008. “We went to $147 [for a barrel of oil] and dropped to $30 and change. The No. 1 thing that moves the market is crowd behavior or ‘animal spirits.’ Jean Cocteau said given the choice the crowd will always make the wrong choice. That certainly happened in 2008 for oil.”

Tom said, “It was clear that the people that were responsible for most of the action [were] the banks and the financial hedge funds and the commodities pools. I don’t want to make them sound like the Dukes in the movie Trading Places. It can be more Warren Buffet-like … very patient money parked, [waiting for] some point in the next few years [when] there will be some explosion in price.”

Like Dan, Tom pointed to the effect of leverage. “There was a great unwinding or bloodletting after the Lehman Brothers crash. That had to do with unwinding leverage and margin calls.”

He also noted that, like gold now, there were commentators hyping the next big price level. “Goldman Sachs … warned of the super-spike to $150 [per barrel of oil]. They said it could actually be a super-super-spike to $200.”

Warning that he was no gold expert, Tom pondered gold’s historical allure. “When I look at gold,” he said, “I don’t know when everyone suggests coming into gold as a hedge … how much of that is a leftover remnant of 3000 years ago and whether it’s an abstraction. It’s always been regarded as X amount of money.” In case of the apocalypse, he said, “I’d feel more comfortable if I had rice or lawyers, guns and money.” Yeah, that’s what I thought too!

After talking to Tom and Dan, I still dawdled over writing this post, imagining the boredom I’d be causing y’all. But it worked out timing-wise, because gold conveniently retreated a bit from its high at the end of last month, even briefly falling below $1600 an ounce. (Today it’s back up to $1662, which is still much more to my liking than the $1900 range.) On September 22, the New York Times ran a story about the pullback in price. The headline? “A Gold Rush Wanes as Hedge Funds Sell.” This month, billionaire investor John Paulson’s funds were hit hard by the gold sell-off. Salida Capital, a Toronto-based gold-and-energy hedge fund, had to fend off rumors that it was going under. What does it all mean? Just that nothing goes up forever. On the other hand, some things recover from their low (though Pets.com sure didn’t). Basically, whether we’re talking about investing in gold or about life in general, there are no guarantees. Don’t believe anyone who tells you otherwise!

You might also like
Record High Still Means Record High
Get Smart (About the Price of Gold)
Jewel of the Month: Stars on Your Ears
Previous Post: « Style Icon: Walt “Clyde” Frazier
Next Post: What Wendy Wore: Vintage Peplum Jacket »