A reporter from Japanese newspaper the Yomiuri Shimbun attended the Independent Fashion Bloggers conference on September 7 and did a story about people wearing prints. My Lego-print Castelbajac dress caught her eye, so I’m in the story, along with some other gorgeous bloggers. 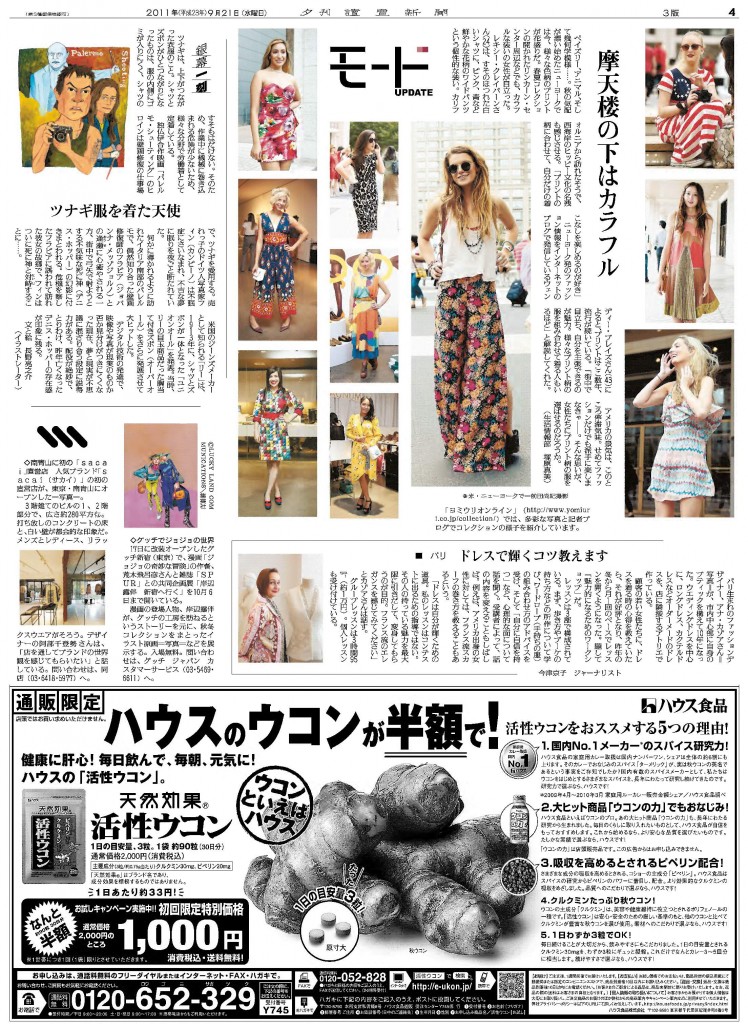 And here’s the online version. Mami, the reporter, asked me why prints were popular and I said, “Prints have become increasingly popular over the past few seasons because they’re eye-catching. It’s a good way to stand out in the crowd. I’ve seen many fashion bloggers mix multiple prints together, but I’m not that daring!” So that might be in there somewhere.

Mami also wrote about the IFB conference on the Yomiuri blog. I don’t read Japanese, so she explained what she wrote: “In Japan, Tavi Gevinson attracted attention when she was invited to a Marc Jacobs show two years ago and sat in the front row. In the blog, I wrote how influential a blogger can be, like Tavi, in the U.S. and introduced the Bloggers Conference, mentioning the advertisement thing discussed by the panelists and saying many of the bloggers at the conference were fashionable and pretty, though many Japanese may think that bloggers are otaku.” “Otaku” basically means a computer/video-game geek who never leaves the house, so I’m glad Mami was able to clear up that misconception.

Speaking of IFB, founder Jennine Jacob was featured on the Barneys New York blog, The Window. When Barneys asked Jennine, “What is the best fashion advice you have ever received?”, Jennine answered, “Wendy Brandes once said, ‘Wear what you want.'” Aw, shucks, Jennine! Thanks for the love.  And thanks to Barneys for the unintentionally amusing post title, in which my long-time fashion philosophy was incorrectly attributed directly to Jennine, despite the fact that she made a point of quoting me. The title? “‘Wear What You Want’ Says Blogger Jennine Jacob of The Coveted.” Ha! 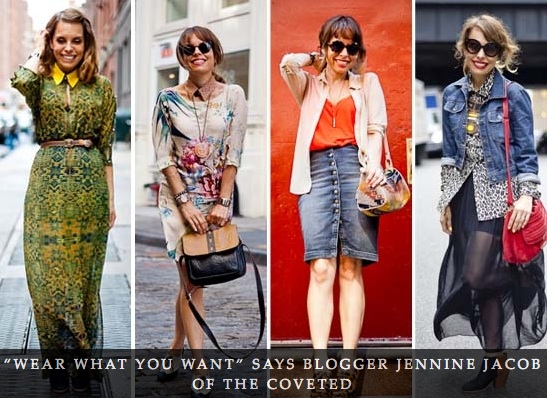 From the Barneys blog. Jennine takes such good photos. Jealous!

I’m in the habit of having near-misses with Barneys. In the summer of 2008, one of their jewelry buyers had selected 12 styles of mine for delivery in January. We were supposed to meet again in December so she could see any new designs I developed and make her final choice.  As you might recall, the economy collapsed in September 2008, so that was the last I heard about that deal. Clearly, that’s why Jennine answered the question “If you were accidentally locked in Barneys New York, what would we find you wearing in the morning?” this way:

“The Mary Katrantzou Vienoua dress with the Derek Lam Fede boots I’ve had my eyes on for a while. God knows what jewelry I’d put on…”

Jennine couldn’t think of any jewelry to wear because mine isn’t available. Duh! Barneys should rectify that immediately, don’t you think? We don’t want Jennine to get locked in there without her favorite jewelry designer to console her.

UPDATED TO ADD: Guess what! Barneys changed the headline on Jennine’s interview, but you can see an image of the original one above. Still haven’t gotten an order for jewelry though! Maybe that’s coming next?