Congrats to Jesse Eisinger and Jake Bernstein — part of MrB’s team at ProPublica — for winning the Pulitzer for National Reporting! The Pulitzer board recognized Jesse and Jake for their stories about “how some Wall Street bankers, seeking to enrich themselves at the expense of their clients and sometimes even their own firms, at first delayed but then worsened the financial crisis.” 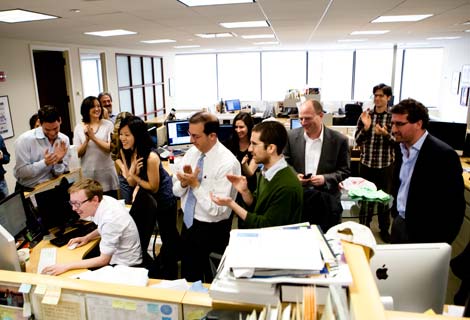 This is ProPublica’s second Pulitzer in two years and the eighteenth Pulitzer won by a news organization led by MrB. Sixteen of those Pulitzers were won by the Wall Street Journal while MrB was that paper’s managing editor.

ProPublica is an independent, non-profit newsroom that produces investigative journalism in the public interest. To find out more about the organization, click here. Here are some other hot links:

If you’re not the type to read serious stories about Wall Street, ProPublica has you covered with these easy-to-digest options:

And if you’re one of those people who insists upon buttonholing MrB at events and forcing him to explain for the umpteenth time why ProPublica is a good idea, don’t be surprised when I throw you the shank-eye. I used to just throw a side-eye, but I’m taking it to the next level now!

You might also like
My Best Dressed at the 2015 Emmys Is ...
Jewel of the Month: Pink Elephant & Drunk Writer "Maneater" Ring
What Wendy Wore: WJA Awards for Excellence
Previous Post: « “Real” Women Wear Leopard
Next Post: What Wendy Wore: Posing in Posen as It Pours »