In November, inspired by the New York Times obituary for Norris Church Mailer, I wrote about how helpful it is to read newspapers on actual newsprint. I said:

“I enthusiastically use teh Interwebs to stay informed, but I’m highly aware of how easy it is to select only what you want to read. That’s why I read on paper too. The mere act of turning the pages means I come across articles that I wouldn’t necessarily hunt down or might plain miss online.”

Today, again, an obituary caught my eye. Violet Cowden, one of the Women Airforce Service Pilots (WASPs) of World War II, died this month at the age of 94.  The WASPs — who were attached to the Army Air Forces — were the first women to serve as U.S. military pilots, doing jobs formerly done by men who were deployed elsewhere for combat duty. The Times said of the WASPs, “…some ferried new places to their destinations, others towed targets for aerial gunnery practice, still others were flight instructors.”

Cowden had taken her first flying lessons in the 1930s, biking to the airfield because she didn’t have a driver’s license. She was later one of the 25,000 women who applied for an early version of the WASPs and one of the 1,830 accepted. At just over 5″ tall, she barely made the minimum weight of 100 pounds. In 2007, she said, “The air is such a comfortable place for me.” She called the P-51 Mustang — a single-seat fighter plane that she flew as a WASP — “the love of my life.”

When the men came home from the war, the Army dissolved the WASPs. Cowden recalled that day in December 1944 as one of the worst in her life. Because commercial airlines didn’t hire women as pilots, the only aviation job she could get was behind the ticket counter at Trans World Airlines. “It was painful, she later said, to be so close to planes yet so far from the cockpit, and she soon left,” The Times reports. The WASPs weren’t recognized as war veterans until 1977. 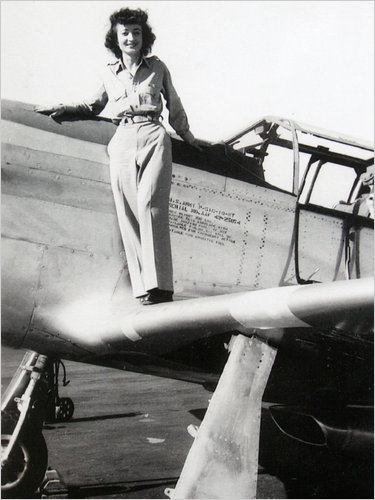 I particularly enjoyed the obituary’s final anecdote, which notes that the WASPs’ work was so important that commercial airlines were ordered to bump any passenger if a WASP needed to be transported to an assignment. Cowden, after being placed on a commercial flight to Memphis, deplaned to see a group of disappointed-looking women. The passenger she had bumped? Frank Sinatra.

I also liked the story about the time her plane caught fire upon landing. The Times says, “…thinking quickly, Mrs. Cowden saved her important papers and her makeup.” The paper doesn’t say if the makeup included red lipstick, but I’m going to imagine that it did. Violet Cowden sounds like a red lipstick kind of gal to me. And to think that I might have missed her if I only read the news online!

You might also like
Treat Yo Self While Supporting Abortion Rights
Biden/Harris Inauguration: Relief and Hope
Three Easy Ways to Take Action on Gun Control
Previous Post: « “Wear What You Want” Icon: Iggy Pop
Next Post: This Free Advice Is the Exception to the Rule »