The only thing better than a gracious note from a gorgeous client is a gracious note with photos attached.  New Orleans-based Jeff Louviere recently emailed me these two pictures of his wife Vanessa wearing my Isabella Wolf-Fang necklace while cavorting with their rescued German shepherds. 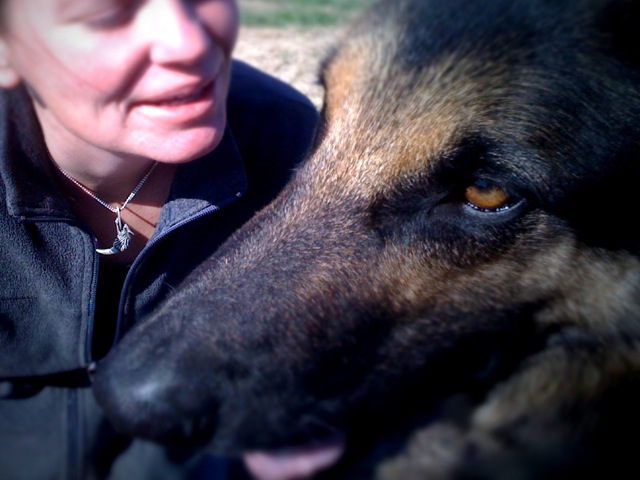 Vanessa doubled up the long chain so she could wear the Isabella at choker length. 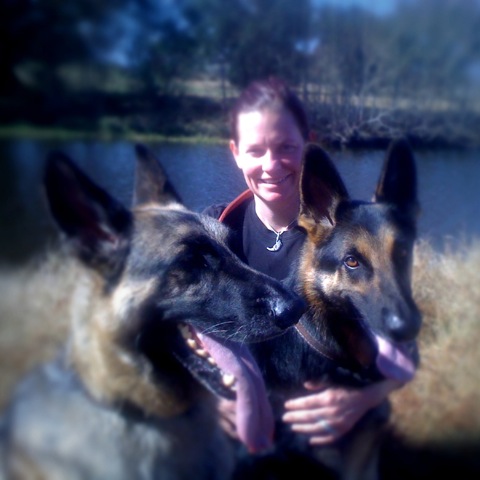 I think that dog's tongue is as big as my entire Pekingese.

The photos were so intriguing that I had to ask for more information. It turns out that Jeff and Vanessa are fine-art photographers, working as a team under the name Louviere + Vanessa. Jeff describes their work as “taking cues from ‘vintage’ processes and using modern technology to take it further.” Kind of like my antique-inspired jewelry, right?

Jeff says, “Our first real series used taxidermy manikins and people trying to ‘fit’ into nature. We printed black and white photos on handmade Japanese Gampi paper that has a flesh toned color to it then coated them with a mixture of wax and blood.” Blood? These are my kind of peeps. 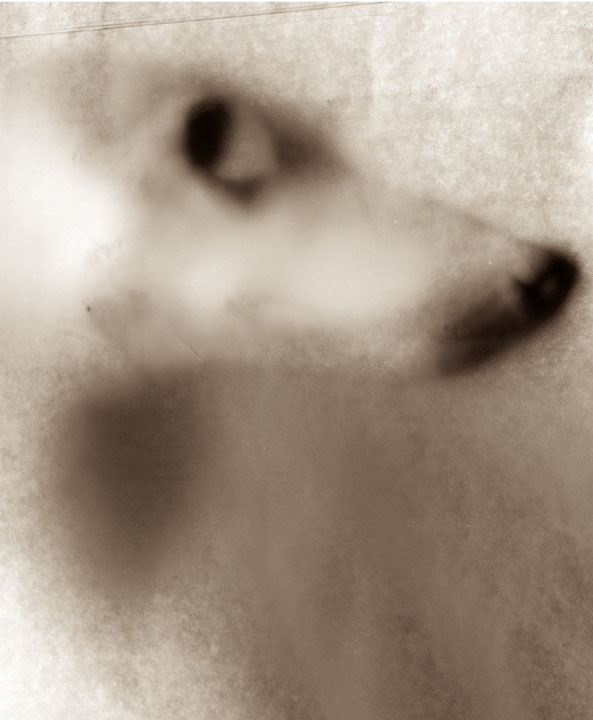 An example from the first series.

Next, they “printed directly onto leaves using only sunlight and the process of photosynthesis.” 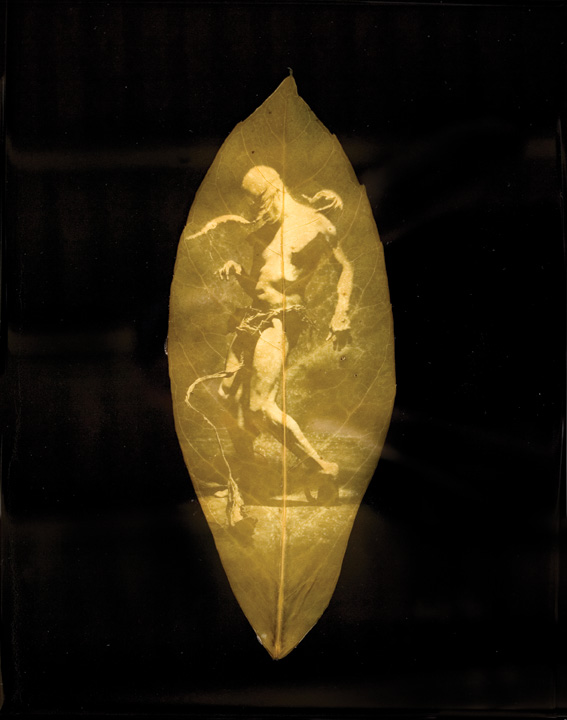 “Then,” says Jeff, “we started playing with the 100 year old process of orotones, using gold as the base of the photograph …we did our own take on it, using gold leaf instead of old oil and using resin to encase the gold leaf and the actual paper photograph and making them really big.” Naturally, I love this work because it involves GOLD! Hello! It’s like jewelry you can hang on your wall. 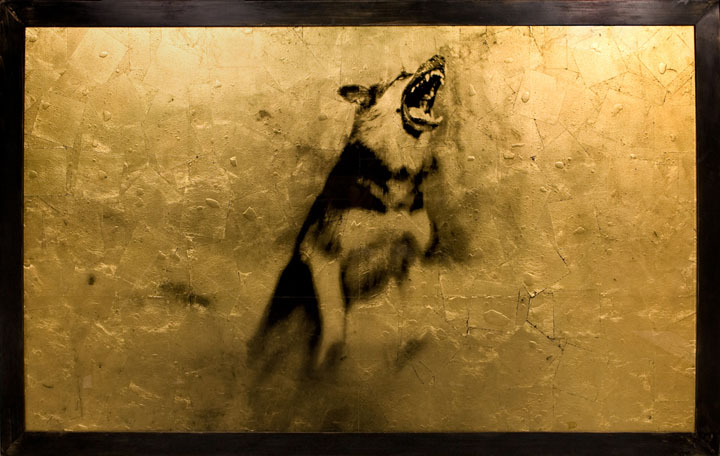 This 8' piece features rescue shepherd Rocky. He looks tough but he was just having fun with a hose.

The gold also reminds me of illuminated manuscripts from the Middle Ages. 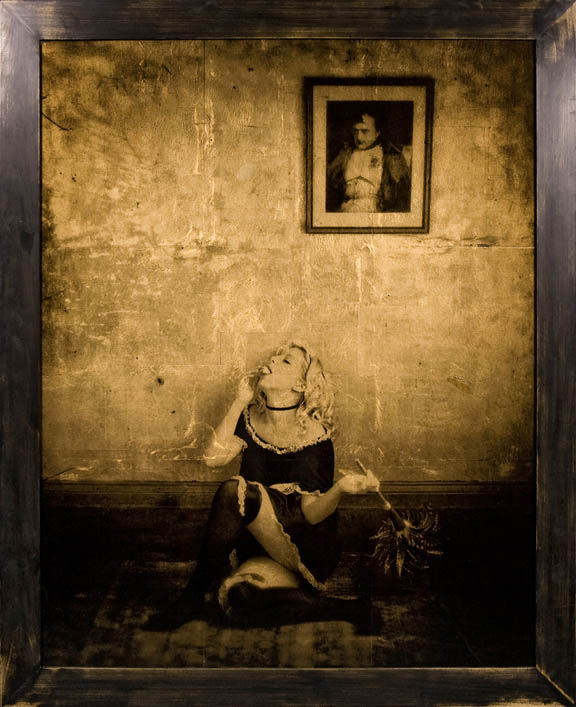 Jeff and Vanessa do experimental super 8mm films as well and this is where they really get me. Just like I have an urge to do strangely complicated things, like turn pendants into whistling lockets, Jeff and Vanessa decided to turn a film into a photo. Jeff explains:

“We shot a picture, gridded it out and cut it into 3,550 individual stills and shot each one on one frame of super 8. We had the film developed and transfered to DVD so it could be seen as a movie, then we cut the physical film strips in one-foot sections and build custom LED lightboxes for them.”

Here’s one from that series.  It was shot in the catacombs of Paris with an “old plastic medium-format camera.” The dimmer switch on top is made of copper wire and … a human finger bone. (Jeff notes, “We did NOT steal the bone! We got it legally.” Phew!) 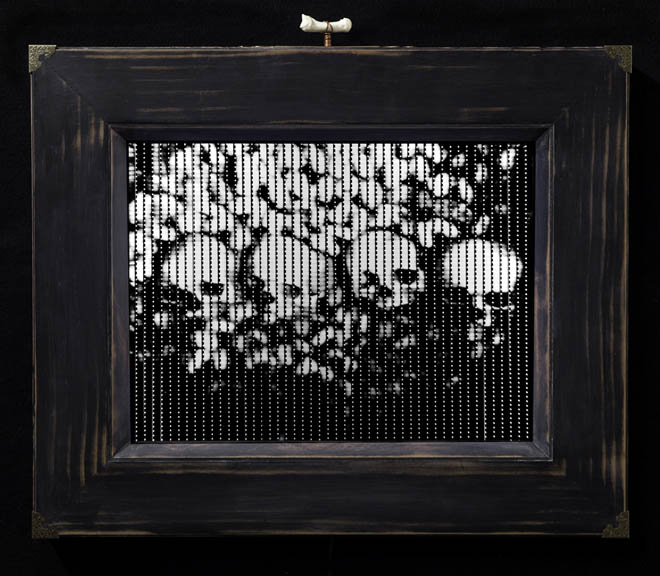 When they’re not having fun with finger bones, Jeff and Vanessa like to play with their German shepherds. They currently have two. One of those has turned out to be part wolf, so the Isabella Wolf-Fang necklace was a highly appropriate gift choice. “I think it’s the mixture of super-goofy and regal that draws us to shepherds — same thing that drew me to Vanessa,” says Jeff.

It’s amazing who you can meet online. If I ever get to N’awlins, I’m going to make a point of seeing this work in person.  Meanwhile, you can check it out on the Louviere + Vanessa website.

You might also like
Edward the Dog Is a Star
Sheila and Her Wendy Brandes Ring
Henry Reads the New York Times
Previous Post: « What Wendy Wore: Desert Pose
Next Post: Ever Think You Need More Backbone? »