Because I’m known for my love of red lipstick, many gorgeous friends emailed me in a congratulatory fashion after scientists at Manchester University announced that men (or at least the 50 men in their study) like to stare at women’s lipsticked mouths, with red lipstick holding their attention the longest.

But staring isn’t the same as loving. In an October post, I wrote about conflicting interpretations of red lipstick.

“… many men have told me that they prefer me without the red lipstick because I look more ‘approachable’ and ‘softer.’ At the same time, I’ve had women telling me that I’m wearing the red lipstick just to please men. Clearly, no one is pleased except me, so I’m going to continue to live by my Wear What You Want™ policy when it comes to makeup choices.“

The same men who prefer me without the red lipstick have told me that red lips are “intimidating.” Maybe the men in the Manchester study were just staring at their greatest fear. Maybe the study took place in George Orwell’s Room 101! 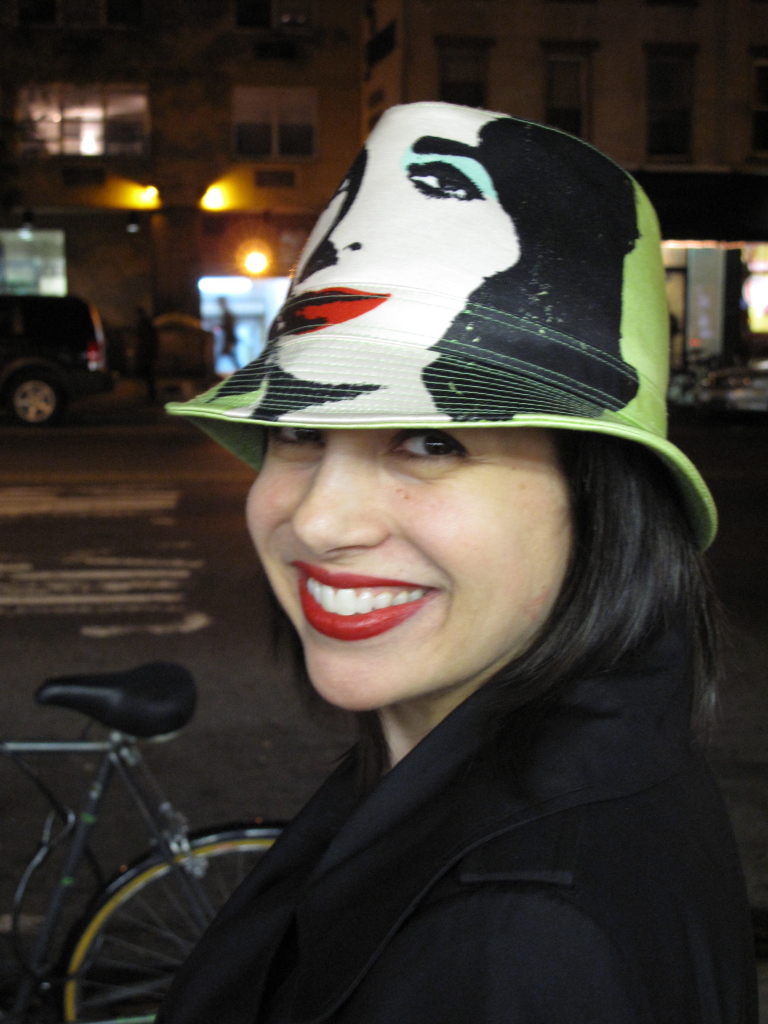 I’d be amused if women started wearing red lipstick in a misguided effort to appeal to frightened men, but I’d enjoy seeing more red lips regardless of the motivation. Based on my experience, it’s the supposedly innocent neutral lip that carries the man-pleasing symbolism. If my red lipstick is intimidating, warning, “Don’t touch me. You’ll mess up my lips,” a nude lipstick is accommodating, announcing, “I’m ready, willing and able.” Add gloss and the message is, “I’m ready, willing and able and delightfully slippery!” Women have also told me that red lipstick is too “loud” for them. Hmmm. Here’s what lipstick designer Poppy King has to say about that in an essay for the Huffington Post:

“The muted mouth. A fashion trend, yes, but an ideological worry. A silent-mouthed generation, despite the tweeting and Facebooking and constant technological chatter. A generation of women unsure about highlighting their mouths for fear it makes them less attractive.” 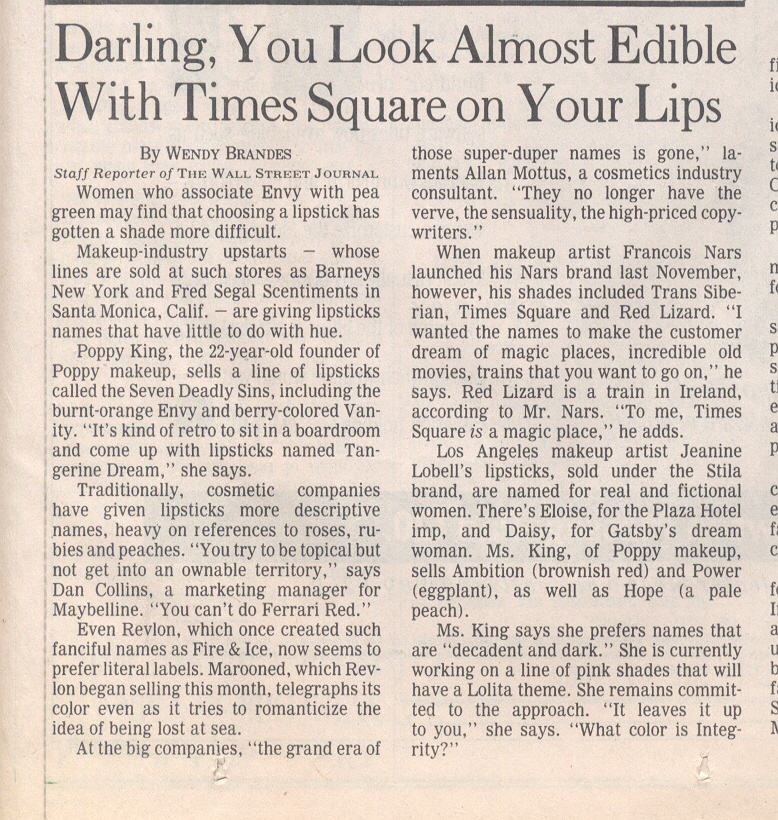 I interviewed Poppy for a 1995 Wall Street Journal story. Click to enlarge.

I’ve already told you that women can’t win when it comes to symbolism and fashion so don’t act all surprised. But, in reality, I don’t care who wears what. Red lipstick, nude gloss, no lipstick — it’s all good to me as long as you’re happy. My point is that symbolism isn’t necessarily universal. The red lipstick that screams “anti-feminist man-pleaser” to some people declares “outspoken feminist bad-ass” to others. 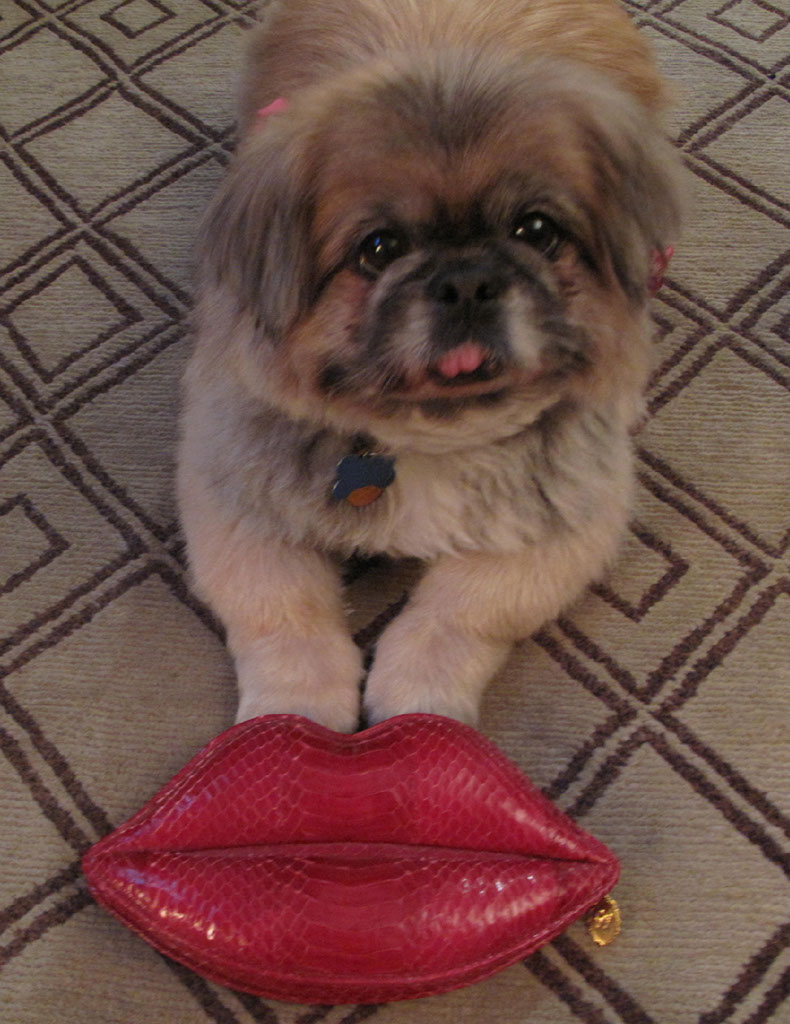 Gigi the dog gets intimidating with a Lulu Guinness red-lip purse.

I was already thinking of how different people interpret things differently due to an email exchange I had with an alumna of a university organization with which I’m involved. I contacted her, identifying myself as the chairman of the board of alumni trustees. I was delighted when she answered, “It is pretty amazing to receive a … message from a woman writing as chairman of the board of trustees. I was the second woman [in a senior position at the organization], and it was a major struggle in those days just to be accepted…” But she went on to ask, “Are you sure you really want to be referred to as ‘chairman?’ A lot of us fought very hard to get the ‘man’ out of these positions.”

Here’s my reply in its entirety:

She loved it. And I loved seeing this quote from actress Tilda Swinton from More magazine via gorgeous blogger Jill:

“Dame? I’d so much rather be a Knight … It would, of course, be a great honor to be asked whether one would. I don’t know. But I think Sir Tilda sounds so much better.”

And in case you wondered, MrB adores my red lipstick because he’s not easily intimidated.