Last year, I had the thrill of doing a custom engagement ring for handsome blogger Thom of The Sunday Best and his gorgeous fiancée, Sharon. It was the first engagement/wedding ring I ever did for a blogger; since then I’ve done many! Thom and Sharon must have brought me good luck.

Sharon’s Asscher-cut diamond set in white gold has a clean and elegant look. It’s much more traditional than most of the engagement rings I make, but, as I always tell my gorgeous clients, I am happy to create anything you want. It doesn’t have to be WendyB style, but it will definitely be WendyB quality. 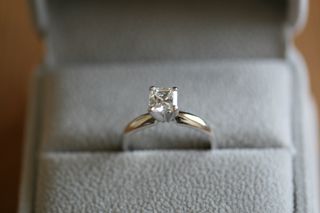 Thom took my message on custom work to heart and, when it came time to do his wedding band, he sent me a picture of an antique, iron, horse-hitching-post ring. 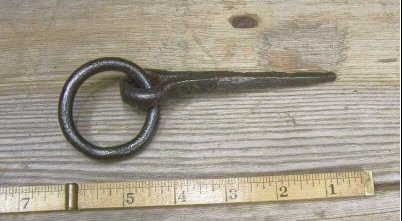 Well, he WAS getting hitched!

He said he wanted the ring just like this — black, iron-looking, and totally round (like a pipe) rather than flattened on the inside. Once again, Thom was a first in my jewelry-designing career. I don’t recall ever being truly surprised by a design request until this one. I was still sure I could give Thom what he wanted and I did. I used white gold that I  textured and blackened to look like antique iron. I snapped a picture before I sent it off to Thom. 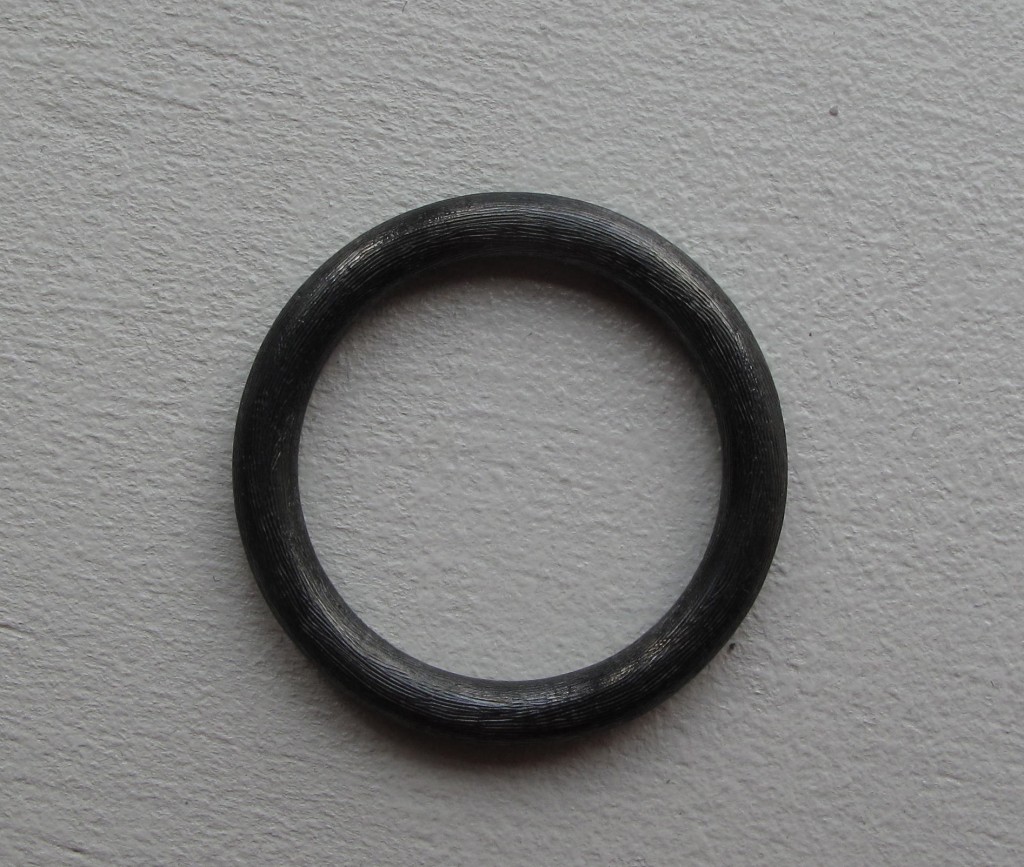 Not bad, if I do say so myself! 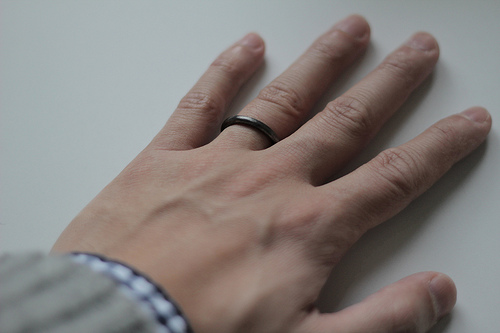 Before the ring got to Thom’s hand, it gave us a lot of drama. I sent it to him express only to have the package disappear into Canadian Customs for TEN DAYS. The day I sent his package, I sent one to Australia by a slower delivery option and that client got her piece long before Thom did. Canadian Customs and I are no longer friends as a result.

When the ring finally emerged from Customs … it didn’t fit. Sigh. Ring sizing is an art, not a science. The metal or plastic finger sizers that jewelers use give you a general idea of the size of your finger. But, unless your ring is the exact same shape and width as the sizer, you’re not going to get a perfectly accurate reading. My ring designs are definitely not the norm. For instance, there is no sizer that replicates the width of my Cleves swan ring. After wearing the ring myself, I’ve determined that customers should order half a size larger than what they normally wear. However, I’d never done a ring in the shape that Thom was requesting. If it had been flat inside and round on the outside, a standard sizer would have worked. Because it was round on the inside, less metal was touching his finger. When more metal touches the finger (like with the Cleves ring), a ring feels tighter. When less metal touches the finger, a ring feels looser.

I often direct people to various sites online that show you how to measure your finger with a piece of paper. That technique isn’t perfect either, because it doesn’t give you the feeling of pulling metal over your knuckle. So, if your knuckle is large compared to the bottom of your finger, you’re going to be way off.

Just to make it even more difficult, finger size is constantly in flux. I had no idea about that before I started wearing so many rings. Temperature, humidity, diet (salt!), and hormones all affect finger size. The effect is temporary but try on a ring at the wrong time and you’ll be way off. My Diana heart ring gave me an extreme case of the fluctuating-finger-size blues. I wear that ring in size 6, on my index finger, all the time. One morning I got up and it wouldn’t go on my finger. After running my hand under cold water, I was able to shove the Diana on. Later that day, I was at lunch with a friend and heard a “clang!” under the table. I looked down and there was Diana on the floor, having slithered off my hand without my feeling a thing. It went from too small to WAY too big in a single day — it hadn’t done that before and it hasn’t done it since. 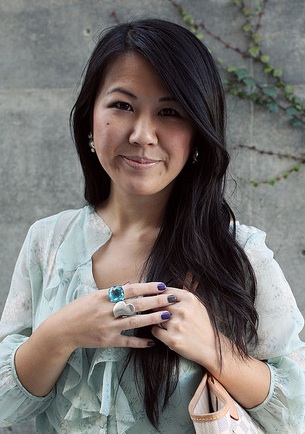 Gorgeous blogger Tiffany is wearing my Diana ring design. I didn't make the blue ring, but I forgive her for wearing it.

When Thom told me the ring was too big, he asked if he could take it to a local jeweler for adjustment. I screamed, “NO, NO, A THOUSAND TIMES NO!” in my head. By email, I simply said that a local person may not have seen anything like this and I couldn’t guarantee a good outcome, so it would be best to send it back to me. When you’re dealing with unique designs and textures, it’s best to have the designer handle any repairs or changes, because people used to dealing with very basic designs won’t know what to do. A good example of that problem came to my attention thanks to the Diana ring, again. My gorgeous friend Jen was visiting a little jewelry shop opened by someone who acknowledged she was new to the business. As Jen was picking out a ring that she thought might be good inspiration for me (the only reason any of my friends should be allowed in other jewelry stores!), the shop owner kindly offered to polish up Jen’s Diana. The ring has a matte finish, like most of my pieces, and the shop owner made it so shiny that Jen could have used it as a mirror in a pinch. When Jen showed it to me, sheepishly, my hair nearly stood on end. I didn’t blame Jen, but I was furious with the shop owner for doing anything to a piece that she clearly didn’t understand. I repolished the Diana to return it to its original matte state, then went on to do Jen’s wedding jewelry.

Thom did send his ring back to me, along with several inexpensive rings he already owned for comparison. I also had him measure his finger with paper. Every result was different! Two of the rings he owned differed by a full size even though he wore them (at separate times) on the same finger. I averaged all the information together, came up with a new size and hoped for the best. During this process there was one more glitch: after I cut metal out of the ring and reshaped it, the ring needed to be repolished, re-texturized and re-plated with rhodium. The “iron” look of the ring was created by dipping the white gold in black rhodium, which was stripped away during the size change. I sent the ring to the same rhodium guy who had done it the first time around and the ring came back light gray instead of black. Same guy, same ring, different result. I sent it back and told him to do the work over again. That’s the kind of service I provide. Unlike the rhodium fellow, I don’t do work that’s not up to par and try to pass it off to the customer. I do all the quality control so you don’t have to.

That’s why y’all should come to me for your jewelry needs. I can do anything from traditional to radical, and I stick with it till you get the jewelry of your dreams.  If you have any questions, holla at me at wbjewelry at hotmail dot com.

You might also like
What We Wore: CPJ International Press Freedom Awards
What Kind of Fruit Are You?
The More Rings, the Merrier
Previous Post: « Back to the Future With Leggings
Next Post: Jewels of the Month: Hathor Ring and Earrings »