Meet Hathor! Hathor was an important — and multitasking — ancient Egyptian goddess. She was the goddess of beauty, joy, romance, dance and incense. She was also the Sovereign of Stars who welcomed the dead into the afterlife. In her spare time, she was the Mistress of Turquoise and the patron saint of miners.

She is the inspiration for what I think are my best designs so far. Behold the Jewels of the Month: the Hathor ring and earrings. Here’s the ring. 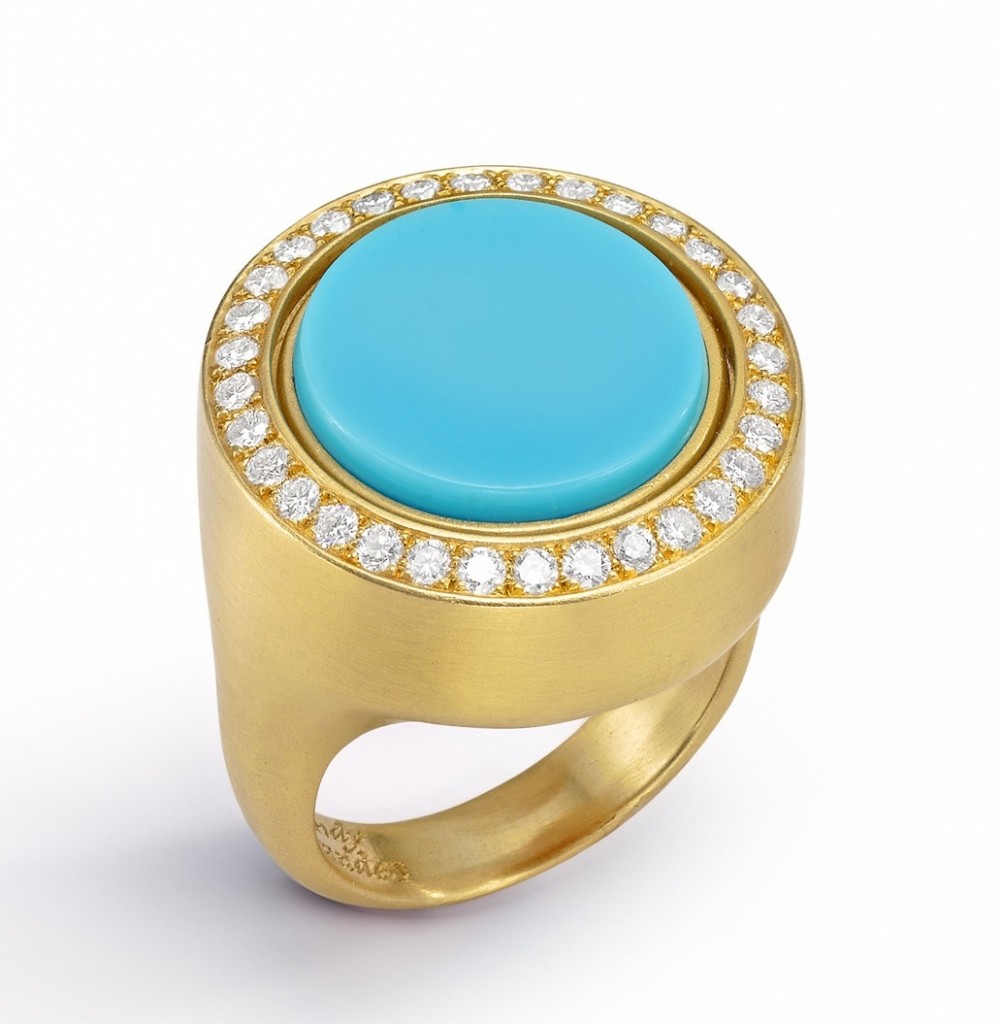 The Hathor ring by Wendy Brandes in 18K gold with diamonds and turquoise.

Isn’t it stunning? But wait! There’s more. If you gently press the edge of the turquoise, the entire center flips, like so … 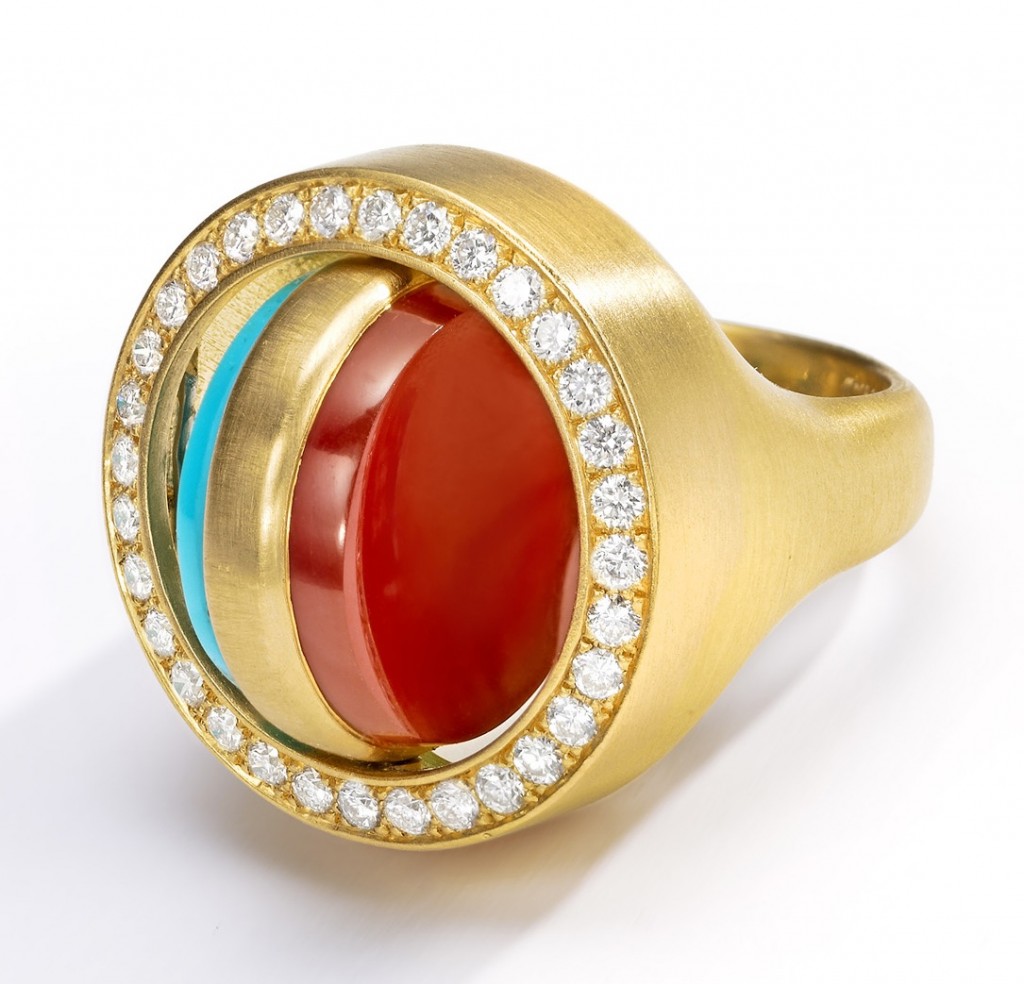 This is the action shot.

… and now you have a carnelian ring! 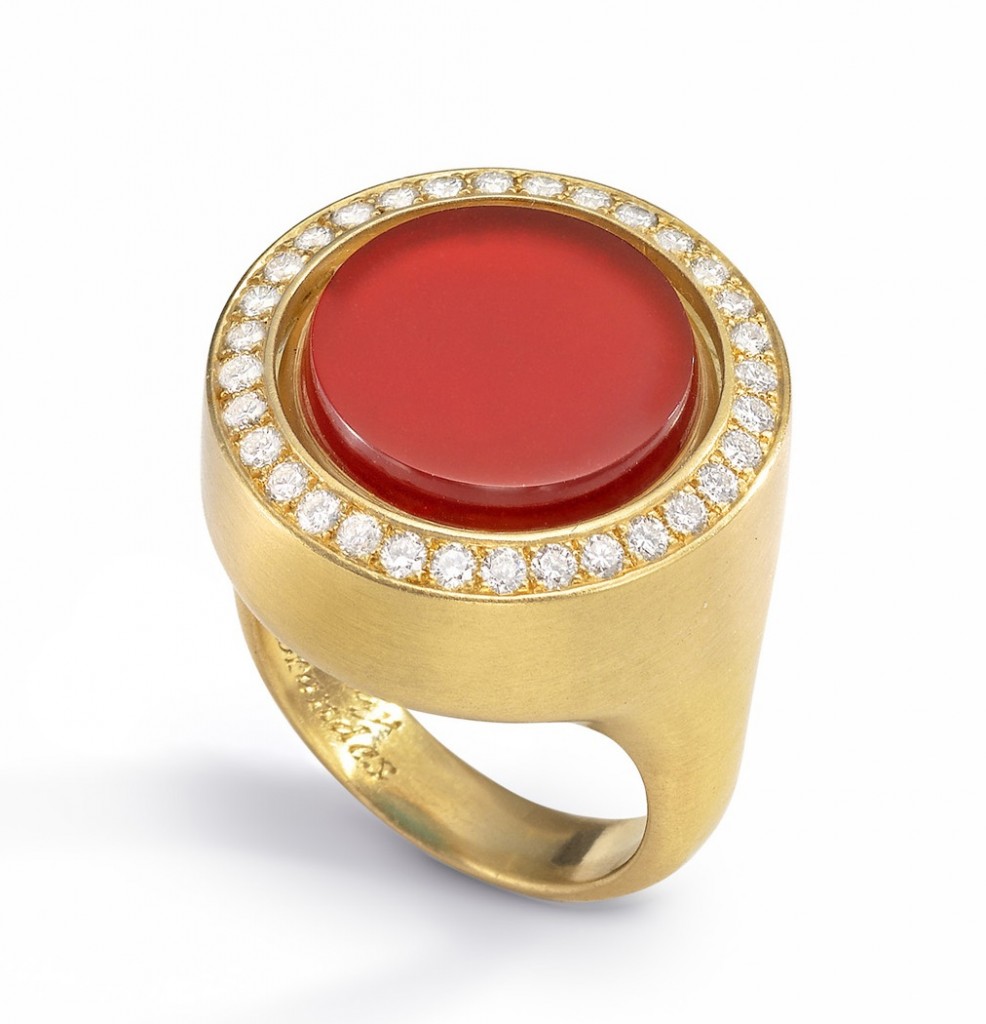 It's two rings in one!

In ancient Egypt, carnelian was associated with the fiery, lionness-headed goddess Sekhmet, who was thought to be as scorching as the midday sun.  Sekhmet, the protector of the pharaohs, was the warlike flipside of loving Hathor. The pairing of opposites turns up everywhere, doesn’t it? Eros/Thanatos, yin/yang, Hathor/Sekhmet. I think the writers of puppet theatrical Avenue Q said it best in their song The More You Ruv Someone:

“The more you love someone,
The more you want to kill them.
Loving and killing
Fit like hand in glove!”

I had wanted to do a flip or swivel ring since 2006, when I started designing mechanical jewelry such as lockets. The swivel concept is ancient. You can see Egyptian swivel rings with scarabs on one side at the Metropolitan Museum of Art. The problem with the ancient design is that you can tell it’s a swivel ring at 10 paces. (Well, you can if you’re me and you’re far-sighted and know exactly what you’re looking for.) There are two obvious hinges on either side of the center jewel. I prefer mechanical jewelry that doesn’t announce its intent. I rather create a delightful surprise, like my gold acorn pendant that opens to reveal a tiny squirrel. I spent a long time thinking about how to do my swivel ring. Then my gorgeous friend Jen lent a helping hand. As I said yesterday, she bought a non-WendyB ring (for shame!) not just because she liked it, but because she thought it might inspire me (oh, okay, I forgive you). 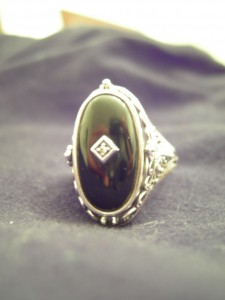 One side of Jen's non-WendyB ring. 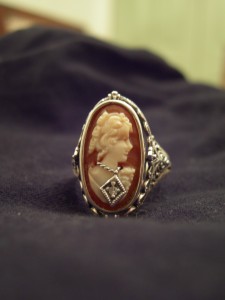 The other side of Jen's non-WendyB ring.

See the little catch at the top of the ring? That’s what lets you flip it. I didn’t want any hint of the mechanism visible for my ring. I also didn’t want a ring that swiveled from top to bottom like this one. Side-to-side action would match my poison rings better. As for the rest of the ring with the filigree and whatnot … well, Jen likes it and that’s what’s important, right? After seeing Jen’s ring, I knew I wanted clean lines, a center stone that flipped sideways and a discreet mechanism. I decided the shape and size of the ring should be the same as my round Juana peekaboo skull ring. After contemplating numerous gem options, I settled on turquoise, to complement my Xenobia ring. Turquoise looks fantastic paired with a deep reddish orange color, so it is often combined with coral. I went with carnelian instead. Why did I care about having colors that work well together when the ring only shows one gem at a time? I was thinking about the earrings. Now you can be wild and wear a different color on each lobe. 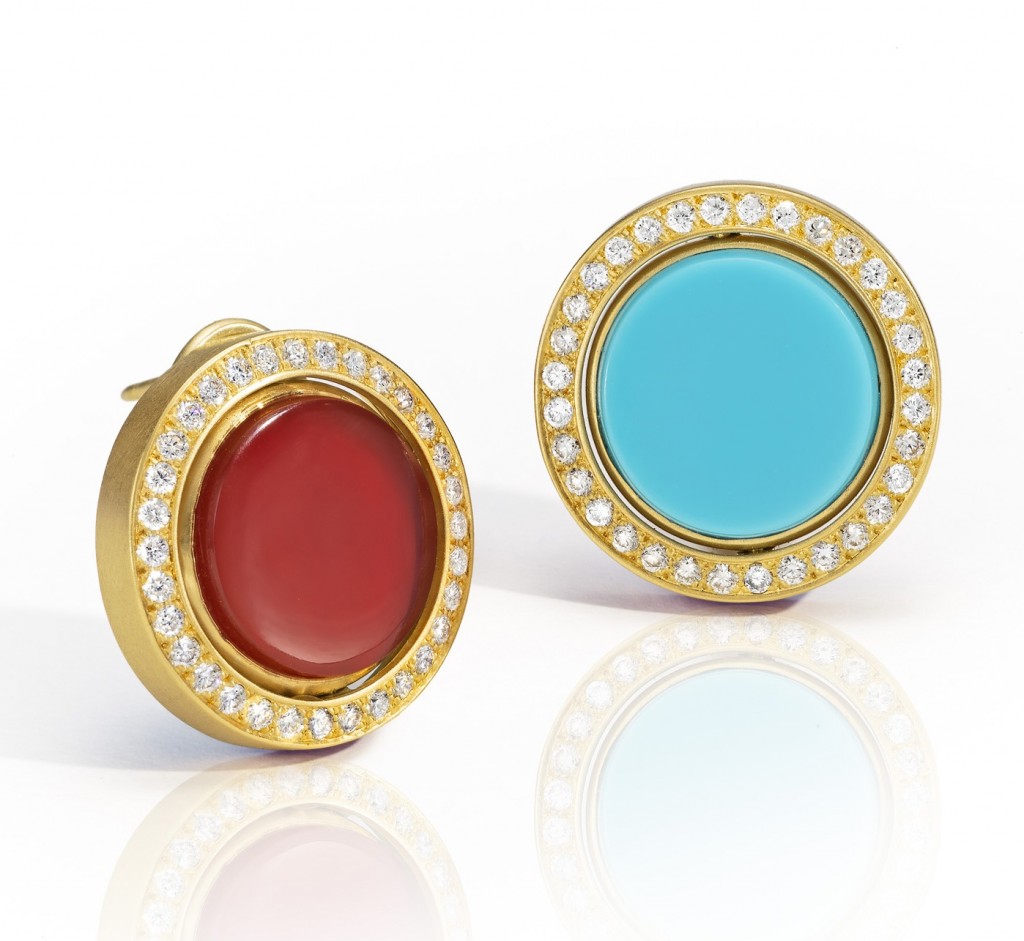 If you don’t like that look, just flip the stones … 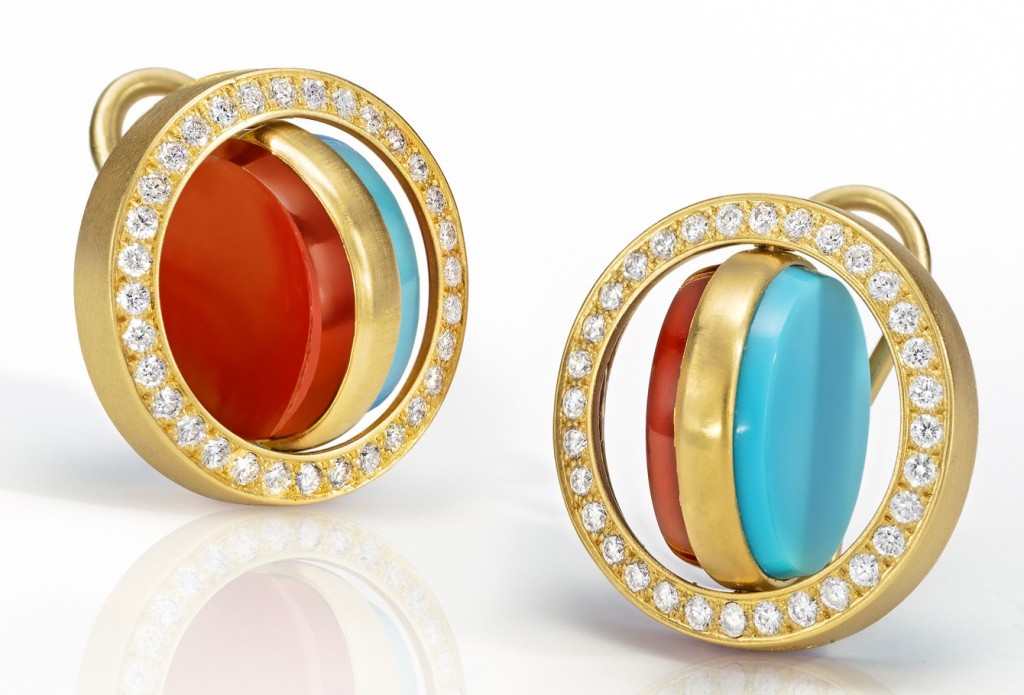 Round and round they go.

… and go all turquoise … 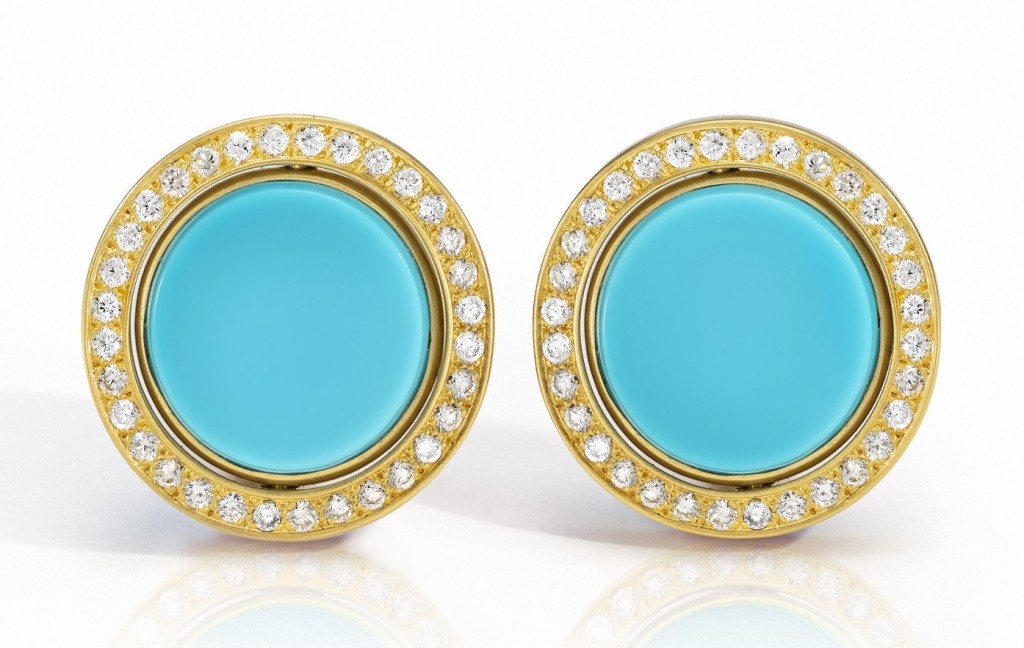 The good kind of blues. 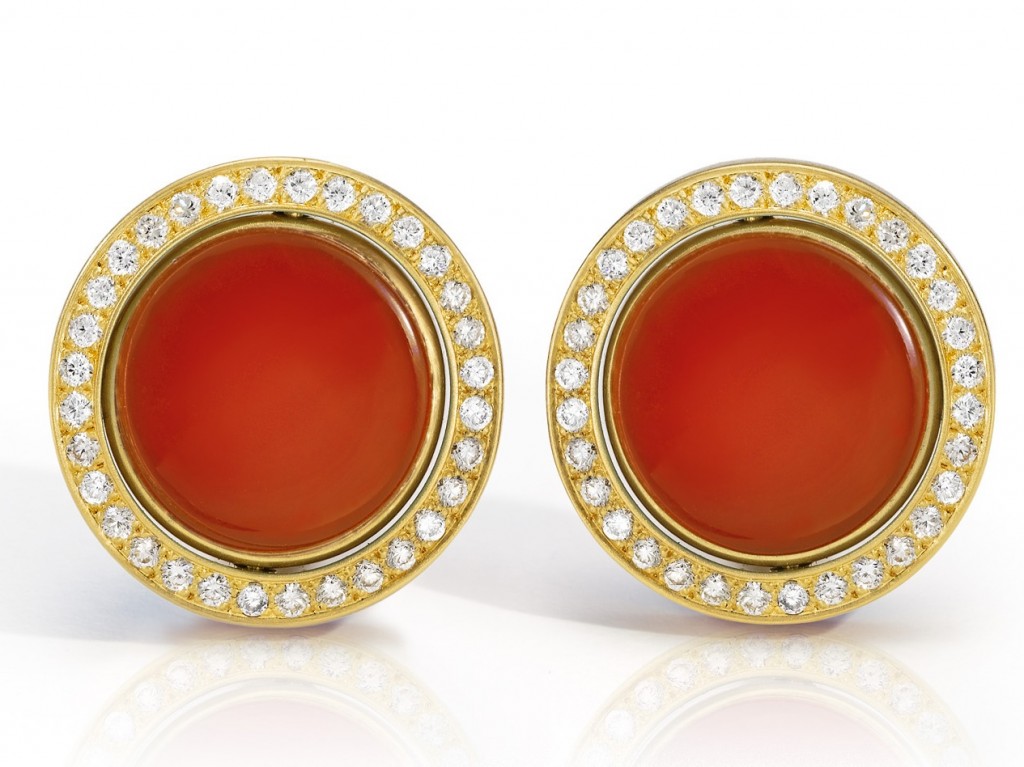 It took about a year to get the Hathor concept from a germ of an idea to wearable jewelry. Perfecting the mechanism was the biggest challenge. I also spent weeks looking at gems. This design can be customized with a variety of gems — I’d love to do a black and white set for a client — but I wanted to have just the right colors for the samples. Once I chose opaque turquoise and translucent carnelian, I found I needed to add a layer of gold in between them to prevent the turquoise from showing through the carnelian and making it look muddy. That was an unexpected extra step.

All that time was worth it. I’m 100% happy with the results. I usually wear the ring with the turquoise up and people compliment it all the time. When they do, I get the thrill of saying, “But wait … there’s more!” while flipping the stone. Jaws drop every time I do this. That’s what my jewelry is all about, peeps. The fun!