Did you know the world revolved around voluptuous Mad Men star Christina Hendricks? Neither did I! Fortunately, I read New York Magazine’s The Cut blog, which alerted me to the fact via a story about Hendricks that ran in the The Daily Record of Scotland. The Record quoted her as saying:

“People have been saying some nice, wonderful things about me. Yet not one designer in town will loan me a dress. They only lend out a size 0 or 2. So I’m still struggling for someone to give me a darn dress.” 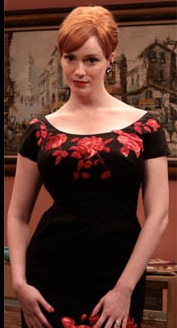 Wait a minute. I’ve been out of school a long time but I seem to recall that the earth revolves around the sun and not an actress. So I better explain why a pretty, talented lady like Hendricks (who wore Zac Posen to the Emmys on Sunday) can’t always get the loaner dress of her dreams. It’s not size-ism, despite what the Hendricks quote implies. It’s logistics.

The designers only have small sizes available because sample sizes are made to fit runway models. And here I will acknowledge that, yes, models are taller, thinner and more beautiful than the typical person. It’s part of the job requirement. Learn to deal with it. The world doesn’t revolve around you and your insecurities whether you’re an actress or an accountant. Not only will there always be people that are taller, thinner and more beautiful than you, there will be people who are younger, more experienced, smarter, more charming, better connected and/or — unless you are billionaire Carlos Slim — wealthier. That’s reality.

Anyway, the runway samples are made to fit models who show off the clothes to store buyers and fashion editors, enabling the designers to get orders and press.  Look up “sample” in any dictionary. It’s defined as  “a portion, piece, or segment that is representative of a whole. An entity that is representative of a class; a specimen.” The samples represent the styles that may then be ordered in a variety of sizes.

People who happen to be model-sized or close can borrow the samples that represent the style.  Lucky for them. Not so lucky for the rest of us including Hendricks, whose measurements, according to The Record, are 39D-30-39. But is the fact that she’s out of luck so awful? (I’m out of luck as well. Samples are too tall for a 5’4″ woman.) For the hell of it, let’s suppose that all designers decided to make all runway samples 39D-30-39 and only hired models of that size. That would still exclude the majority of people. Some of us would be smaller, some of us would be larger. We have to accept the fact that we are not all the same size and never will be. (For more on the challenges of sizing, read this New York Times Magazine story and the many excellent posts that Kathleen Fasanella of Fashion-Incubator has done on the topic.)

Then, you might be wondering, why don’t designers make a range of sample sizes? Refer back to the definition of “sample.” It defeats the purpose of making a specimen or representation if you’re making the entire line.  Why should designers invest enormous amounts of time and money to make 12 versions (that number assumes they’d do U.S. sizes 0 – 22, and doesn’t take into account differences in height) of each style, including styles that might never be ordered by stores. And this would all be just in case Christina Hendricks wants to borrow one for free? 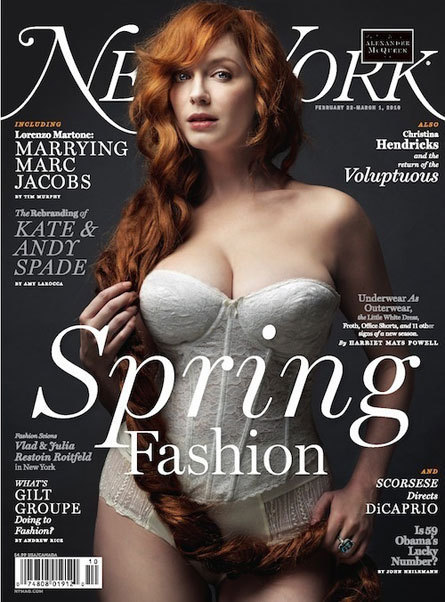 Hendricks on the cover of New York Magazine this year.

Let’s look at how this would work with jewelry. A good sample size for a ring is a 6. It’s an average size that’s likely to fit at least one finger on many women, so a customer can get an idea of what the ring would look like once it is made in her size.  Most (but not all) of my female customers fall between a 5 and an 8 when it comes to ring sizes. I do rings in quarter sizes, so to cover sizes 5 through 8 — while discriminating against my poor 4 3/4 and 8 1/4 ladies — I would have to do 13 sizes of each style in order to have a ring ready to go for nearly anyone who walks in the door. That could easily cost me $100,000 per style.  Ridiculous! That’s why I just do a single ring for people to view and order in their own size.

I would love to get a ring on Christina Hendricks. If she tries on my gold-and-diamond Borgia poison ring in sample size 6 and it fits her, I’d be glad to loan it to her for an evening. I haven’t seen a single episode of Mad Men, but I liked her two-episode arc on Firefly, so why not? 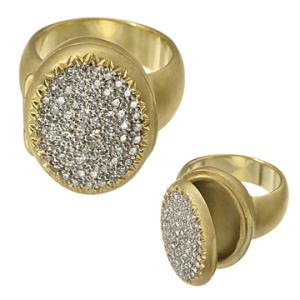 If the sample doesn’t fit her, I’d be delighted to custom-make a ring in her size. Of course, she’d have to pay for that. If I started making free rings for everyone who wanted them, I’d go broke in less time than it is taking me to write this post. Duh! Everyone wants free stuff! Meanwhile, contrary to popular belief, having a dress/purse/ring seen on a celebrity doesn’t always translate to big sales. Press is good for overall brand recognition, but there are times it doesn’t move a single unit. If you’re not going to be compensated for your work by the customer AND the customer isn’t guaranteed to generate sales, does it seem like a smart idea to start making special things and giving them away to every person who thinks the world revolves around him or her? If common sense isn’t providing the answer to you right now, you might want to reread my posts Get Smart (About Manufacturing) and Get Smart (About Custom Work) about the costs of production.

Remember, I’m just talking about sample sizes and loaners here. If Christina’s complaint was, “I walk into stores and they don’t have my size,” I wouldn’t be writing anything like this because that is a legitimate complaint and entirely different from the sample size issue. I’m not saying that women of a certain size shouldn’t have access to great clothes. They should. Support the designers who do offer a wide range of sizes! My designing friend Zang Toi has customers of all sizes and ages. They choose from his tiny runway samples and he makes their pieces to order.  Stacy Lomman of taffetadarlings took the unusual step of pre-selling her samples in order to raise money for her first show via Kickstarter (you can still contribute here). She’s currently fitting the dresses to the models. After, she’ll resize the dresses to fit the people who bought them. A few dresses will have to be made from scratch, costing her extra money. But, if her models were 39D-30-39, the same thing would be happening. Repeat after me until you learn it by heart: one size does not fit all, bitches!

What could Christina Hendricks do to get around her free dress problem? I’d recommend that she stops worrying about freebies and instead becomes a valued paying customer. Any designer is more inclined to whip up special pieces for reasonable prices for customers with good track records. It’s great to have a working relationship with a designer, as my customers can attest, and I’d say the same of buying clothes from Zang and Stacy. It’s not as if the free-dress phenomenon (which I’m not against because, as I said, it is good for branding) is an ancient tradition that must be respected. My Facebook friend Jeffrey, a fashion-industry veteran, notes, “I sold many dresses to many of the Dynasty and Dallas girls way back when —and yeah we gave them a deal but it was by no means free.” Gorgeous blogger Madeleine of In New York Paris Tomorrow, another retailing vet, says, “Sad days for indie shops: we used to SELL these things, and the shoes and the bag and the jewels. Still trying to understand the Swag Parties for the Emmys etc … and … we didn’t give deals (although friends could borrow our own pieces).”

Finally, for those who can afford it, buying is every bit as glamorous than borrowing, if not more so. As Jeffrey points out, “Elizabeth Taylor wore her own jewelry, her own clothes, had no stylist and was still every inch a star.” 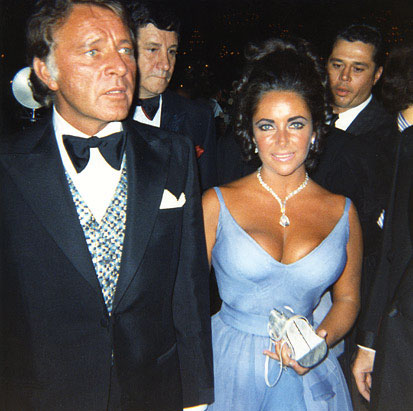 Elizabeth Taylor and Richard Burton at the Oscars in 1970. Burton bought her the 69-carat diamond she's wearing.

Christina is probably closer than any other actress today to having Liz-style va-va-voom, and I enjoy seeing her on the red carpet. I hope she continues to find plenty of gorgeous dresses to wear, even if they’re not always free.

Remember, y’all, The Sisterhood of the Traveling Pants, in which one pair of jeans magically fits four girls although they have completely different measurements, is fiction! In real life, one size does not fit all. It doesn’t matter if a sample is a 0 or a 14 — it still won’t work for everyone. That’s the simple truth, not a personal attack. We’re living in a world without magic: no unicorns, good witches or supernatural denim. But, hey, at least we have Antoine Dodson and Sam Waterston’s eyebrows. What!? Those things seem magical to me!

UPDATED TO ADD: I like the cartoon here. It reminds me of some of the issues I raised above.

You might also like
It Ain't Over Till It's Over! Be Inspired by Survivors.
Louis Vuitton Is Cancelled for Me
Fourth Blogversary
Previous Post: « Change of Taste
Next Post: What Wendy Will Wear: Dress by Zang Toi »