Back in March, while explaining the work that goes into creating custom designs, I mentioned that I spent an hour on the phone with one guy discussing how he was going to propose to his girlfriend. Time to tell the whole tale and introduce you to John Muggenborg. He’s one of my talented product photographers, so you’ve seen his work all over my website and blog. You can see more of it on his website. John also contributed to my Kickstarter campaign for new ring designs, so I owe him a big thanks for that.

When John was getting ready to propose to his beloved Olivia, he brought the dramz to engagement-ring shopping. You see, Olivia is an industrial designer at Henri Bendel. She’s also worked with legendary ceramicist Eva Zeisel. Obviously, any designer is going to be very particular about something that’s going to be on her finger every day. But whenever John lured her into a jewelry store to get an idea about what she wanted, Olivia wouldn’t drop any hints.  Despite that, he was determined to propose with ring in hand. I went through the whole checklist I mentioned in that custom-work post to try to get an idea of her style: her height, her coloring, her job, her hobbies, her other jewelry. After exhaustive study, John selected a classic, round, brilliant-cut diamond as the centerpiece for Olivia’s ring. That was the easy part. Now how to set the stone? I thought Olivia might like the sleek, modern look of a bezel setting, which is my preference too. But it’s less traditional for a diamond than a prong setting and therefore a riskier choice. There was no way for John to figure out what she would prefer — unless he asked her.  I discussed this issue in my recent post on engagement-ring redesigns:

“I prefer that the woman becomes involved with the design. If she’s not personally meeting with me because the man is trying to maintain some element of surprise, I want him to come in with pictures she has torn out and/or specifics she has written down. My attitude is: let’s be adults. You two have presumably discussed your lives together. You should be able to discuss your ring options. Seriously, ladies, you wouldn’t have a man surprise you with a wedding gown that you only wear once, so why should he make a decision on an item you’re going to wear every day for the rest of your lives together? The fairy-tale moment of the surprise proposal is going to be ruined anyway if he opens the box to reveal something you hate.”

I tried to convince John to either ask Olivia outright about the ring before proposing or propose without the ring in order to avoid the Aidan-picks-an-ugly-ring-for-Carrie scenario. (Nine years ago, MrB and I managed to get engaged without an on-bended-knee proposal or ready-made ring, so I have proof that it works!) But John was absolutely determined to whip out a surprise ring, like Prince Charming whipping out a glass slipper. He asked about putting the stone in a temporary setting. Normally, I’m against temporary “presentation” settings because of two issues:

I learned about Issue No. 1 from Head & Shoulders commercials.

John put a hell of a lot of time into picking out a high-quality stone. Why detract from his choice by placing that stone in a made-in-China setting and creating a first impression of “That’s not the ring I dreamed of. Doesn’t he know anything about me?” Of course, because of Issue No. 2, the Mars/Venus communication problem, the typical woman doesn’t voice this first impression aloud.  She imagines that her man put serious thought into choosing that setting. Even if he says, “You can change it if you want,” she so believes that the setting is emotionally symbolic that she insists on keeping it. Here’s a reality check, ladies! The typical straight guy has no idea what to get you. He picks the safest option and hopes for the best. He’s not emotionally invested in the ring setting, only in your happiness. If you tell him that you don’t like the ring, he’ll be bummed that he guessed wrong, but ultimately relieved when you have something you love. There’s no need to keep an  A+ stone in a C- setting for decades … until you come to me for a redesign, at which point, your hubby says, “You should have told me 20 years ago! ”

As much as I like redesigning rings, I’d rather get them right the first time. But I figured I could safely make an exception to the “no temporary settings” rule because Olivia is a designer. I felt 99% sure she wouldn’t be shy about expressing her aesthetic preferences. I set John’s diamond in a standard, 14K white gold, four-prong setting and checked in with John one last time to make sure he wasn’t going to propose via JumboTron at a sporting event.  I will give you a temporary setting if I have to, but I will NOT condone a JumboTron proposal. I have to draw the line somewhere.

John and Olivia took a lovely Easter-time trip to the Bahamas. That Bahamian Easter Bunny is fancy. Look what he left for Olivia! 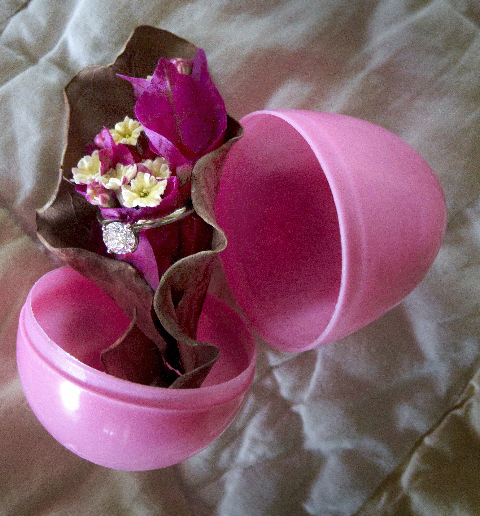 The ring was hidden in a plastic egg. Photo by John Muggenborg 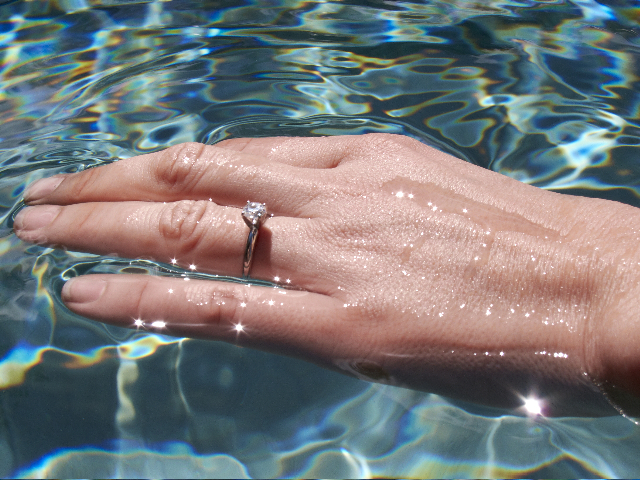 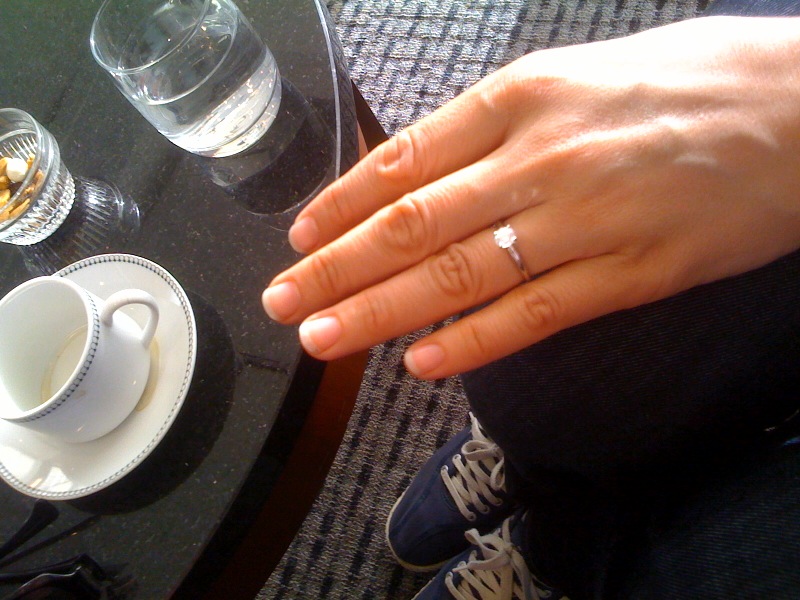 The temporary setting drinks some coffee. Photo by John Muggenborg 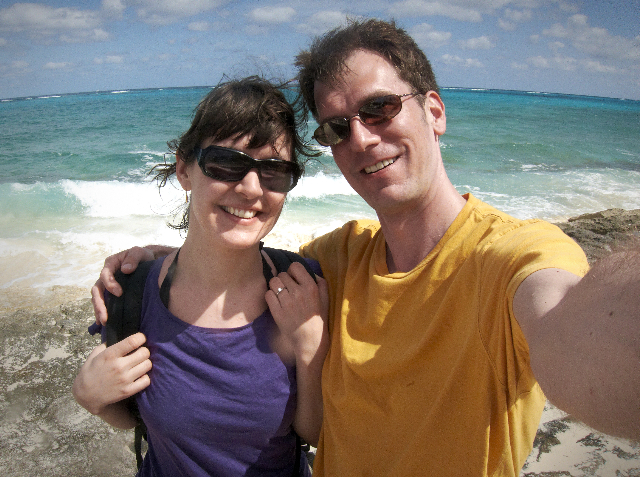 Olivia and John. She said yes! Photo by John Muggenborg

As hoped, Olivia was eager to create a ring that was more her style. She even sent me a technical drawing! Talk about making my job easy. She opted for a bezel setting — woot! my initial guess — and switched from 14K white gold to 18K yellow gold. 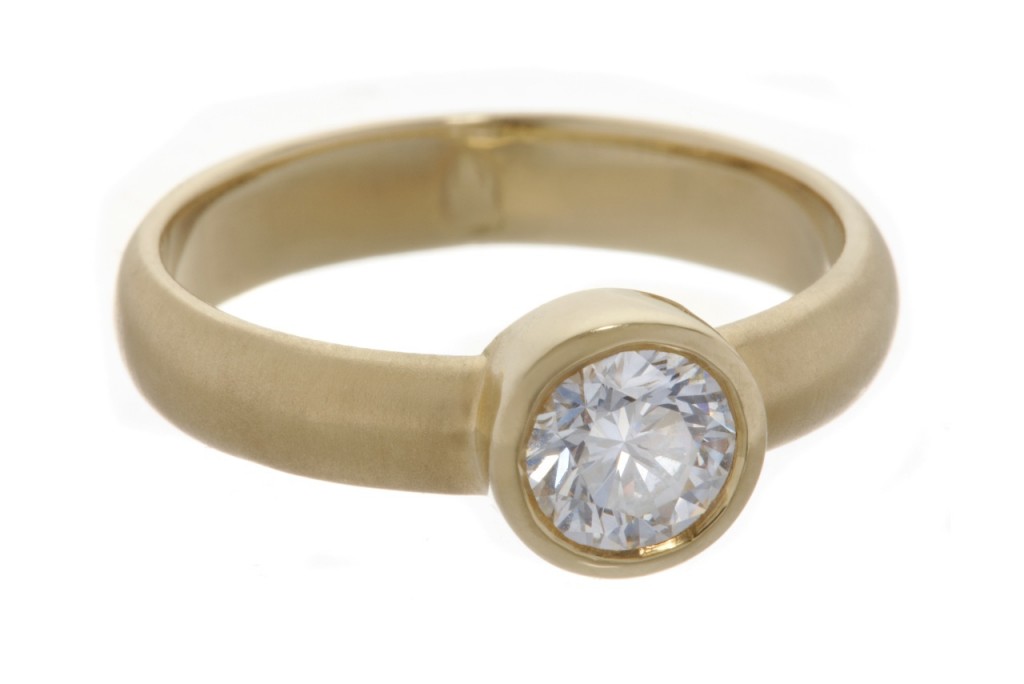 The final version of Olivia's ring. Photo by John Muggenborg.

I love this look, but more importantly Olivia does. She sent me the kind of email that I like to get:

“Thank you so much for helping create the ring of my dreams!  It’s perfect & exactly what I always wanted. I’ve only had it for 2 days, but I feel like I will live with it forever, and still love it as much as I do now. Thank you, thank you- you did a GREAT job!
P.S. – I have already received tons of compliments! My friends especially say- it’s so ME.”

As for John, he successfully carried off the surprising, memorable, JumboTron-free proposal of his dreams. I look forward to the excitement of doing all of his anniversary, Christmas and Valentine’s Day jewelry.

Meanwhile, I’m working on an engagement ring for another gorgeous lady who happens to have a design background. Her fiance and I started it based on some preferences she’d tentatively shared. Then her guy decided to skip the surprise and check in with her. Lucky he did! What she has in mind now is unlike anything I’ve done for an engagement ring before, though it’s inspired by one my other designs. We would never, ever have guessed. I can’t wait to do something completely unique for her, knowing that it’s 100% what she wants. Stay tuned to see it … one of these days. Hey, I have to wait till the proposal to share these things!

UPDATED TO ADD: After reading this post, John sent me a link to this video of a failed JumboTron proposal at a Rangers game. Here are two more sporting-event proposal rejections, not involving JumboTrons.

You might also like
Jennifer Aniston and Her Big Diamond Engagement Ring
Jewel of the Month: Siobhan Ring With Mixed Metals
Introducing Wendy Brandes Wedding
Previous Post: « Meet Me at IFB on September 9
Next Post: What Wendy Wore: Nautical for Nautica »