It took me nearly two years, but I finally wore the white lace Dolce & Gabbana coat that I bought from Trudie Styler (aka Mrs. Sting) thanks to some styling tips from gorgeous blogger/designer Stacy Lomman of taffetadarlings. In fact, I wore the coat two ways in one day. For our friends’ anniversary party at Bar Henry (congrats Jane and Norm!) on Monday, I wore the coat over a vintage Herve Leger dress. 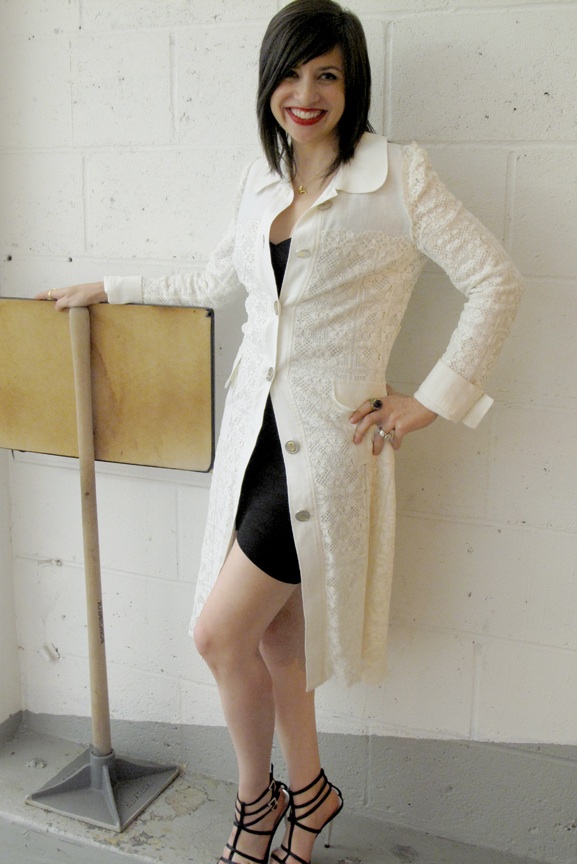 A parking garage was the only place with enough light for a photo.

I got the dress not long before Leger bandage dresses started being produced again. Everyone’s neck-deep in Leger dresses now, so that was a very bad purchase, timing-wise. Whenever I see the dress in my closet, I give it the side-eye. My toes decided not to make an appearance in this photo, which was for the best, because I painted their nails a regrettable fluorescent green. I’m glad they’re hiding themselves in shame.

Earlier in the day, for a lunch my friend Barbaralee had in honor of the 45th anniversary of the New York City Landmarks Preservation Commission, I wore the coat over a longer dress, with Yves Saint Laurent shoes from a few years ago, and the Prada bag that MrB got me for my birthday in December. Gigi the dog with the accessories.

Barbaralee is truly the hostess with the mostest. Not only did she introduce me to people as a journalist-turned-jewelry designer/fashion blogger, but she introduced my purse too, telling more than one person that it was a birthday gift from MrB. What a memory!

Maybe the purse got me extra-enthused for light blue, because the next day, I wore a light-blue, Spring 2005 dress by Zang Toi to a cocktail party in honor of the Tribeca Film Festival. I told superstylist Julie Matos to do anything she wanted with my hair and she wanted big and retro. Happy because I'm anticipating a glass of white wine.

If that dress looks familiar, it’s not just because I’ve posted it before. The brown velvet gown I wore to the Malaysian party on Friday is the same dress. Zang liked the blue one so much that he insisted I have a long version too. I’m wearing those shoes instead of the sandals I wanted to wear because I didn’t want to see the Day-Glo green toes with the light-blue dress.

MrB and I had the good fortune to bump into our anniversary-celebrating friends Norm and Jane at the cocktail party. When we found out Norm was going back to work, we decided to steal Jane and take her to dinner, but we couldn’t decide on a restaurant. Then Jane spotted restaurateur Drew Nieporent, consulted with him and, next thing we knew, we had reservations at Corton. Nice work, Jane! And thanks, Drew. We had a great meal. But we might have had too much to drink because Jane and I realized later that we took a picture of the petit fours but didn’t take a picture of MrB looking like he was out on the town with two dates.

Before we left the cocktail party, I noticed three women in a group giving my Zang dress the up-and-down look in an uncomplimentary way. Humph! I thought I was dressed very conservatively compared to the last time I went to the film festival event, especially because I came “thisclose” to wearing my crazy dollar dress. The dollar dress would have justified an eye roll!

You might also like
The More Rings, the Merrier
What Wendy Wore: Southpaw Premiere
No, Really, This Is the Last Time
Previous Post: « Swear Rings in Russia, Earrings on Perez
Next Post: Leather-Shorts Leader and More Double Denim »