This winter, I’ve spent a number of insomniac nights watching 3 a.m. and 4 a.m. reruns of Buffy the Vampire Slayer on Logo. After seeing the episodes Double Meat Palace and Dead Things, I complained via Twitter that Buffy was unkind to her Billy Idol-esque, Brit, bad boy vampire lovah, Spike. 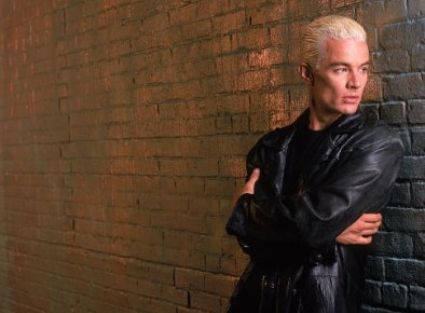 To my surprise, I got about 40 replies from fellow Spike fans. I eventually asked them if I should do some Spike-related jewelry and got a resounding “yes.” I immediately had two designs in mind.  The recent mega-popularity of vampire book/movie series Twilight (Team Edward!) and mega-sexiness of TV series True Blood never inspired me to do any vampire jewelry, but a show that went off the air seven years ago? Of course! The first Spike-inspired design is a variation on my heart-shaped Diana design and is February’s Jewel of the Month. Here is the Vampire Diana, complete with a “wooden” stake through the heart. 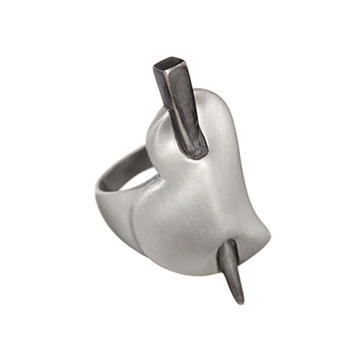 I just got this piece done on time for my sale this week — it was finished that day — so the official pictures aren’t yet taken and it’s not on my site. If you want it, it’s $450 and you can email me at wbjewelry at hotmail dot com to order. The perfect belated Valentine’s gift, for a loved one or yourself, whether dead or undead. I’ll be coming out with several variations, including necklaces and gold versions, so stay tuned for those. And, of course, I have one more Spike-inspired piece coming up.

I can’t mention Buffy and Twilight in the same post without sharing this video, which shows how feminist Buffy kicks Twilight ass.