People who haven’t tried Twitter assume that it’s nothing but dull announcements of intake and output: “Making lemon bars…yum!” “I need to go pee.”*A  There’s a lot of that, but Twitter also can be very interactive and I’ve had great conversations there.

Some of my favorite dialogues have been with a Twitterer who isn’t online that often because she’s very, very busy. She’s also very, very famous. More famous than Ashton Kutcher. My friend’s Twitter name is Always_The_Same, which is an English translation of the Latin “Semper Eadem.”A  “Semper Eadem” was the personal motto of Elizabeth Tudor, aka Elizabeth I.A  I’m tweeting with England’s greatest ruler and my ultimate role model! 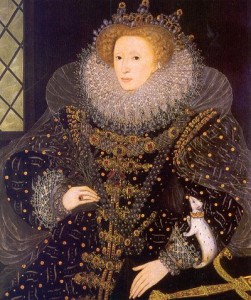 Click Elizabeth I to read what I've written about her.

Her Majesty the Queen knows that I’m a fan loyal subject. She usually tweets to her fellow royals, but occasionally, when she’s not preoccupied with ruling Britain in a parallel universe where it is still the 16th century, she deigns to correspond with me. She generously praised my Gloriana necklace, among other designs. But last fall, I panicked when I received these two tweets:**

Always_The_Same @WendyBrandes my lady I am hoping you may assist me. Thou hath honoured the memory of @SheWolfOfFrance with fine jewels..

Always_The_Same @WendyBrandes …tho I am truly struggling to find her finer points other than being a strong lady in an era of male rule.Canst thou advise?

Elizabeth was speaking of my Isabella wolf-fang designs, inspired by the 14th century’s so-called She-Wolf of France and seen here in necklace form and here in earrings. Gorgeous blogger Work With What You’ve Got recently bought the Isabella necklace in silver. 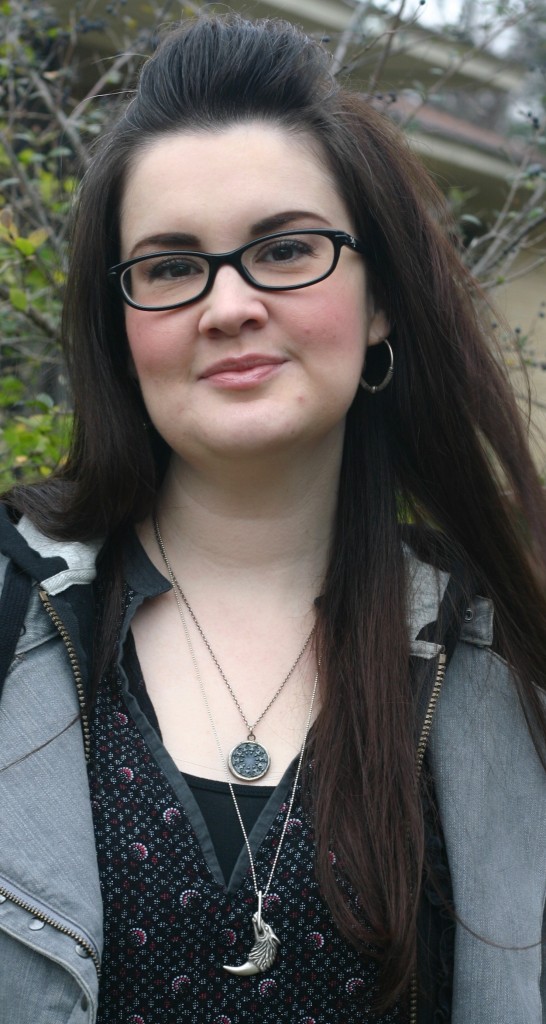 Work With What You've Got and Isabella. Click for more!

Royals can be a bit jealous sensitive, whichA  I’ve noted before, so this situation needed to be handled with care. There are dire consequences for giving the wrong answer to the ruler of a kingdom. After considering several explanations, I decided it was safe to say that Isabella knew how to throw a good party. As I previously wrote about Isabella and her BF Roger:

They executed Hugh le Despenser in a perfectly acceptable 14th century way: they dragged him through the streets, stripped him, hanged him, cut him down before he died, chopped off his penis and testicles, threw his manhood in a fire, cut him open, threw his heart and entrails in the fire, and cut him into four pieces. Then they had a party. Good times!

I was relieved to know that I wouldn’t be sent to the Tower or a convent after Elizabeth tweeted:

I blushed with pride when Elizabeth tweeted her mother, Anne Boleyn (identified on Twitter by her motto, The Most Happy):

Always_The_Same @the_most_happy methinks @WendyBrandes must be some descendant of Lady Woodville or the house of of Howard. Definitely some royal blood.

And I practically danced with joy when, addressing me again, Elizabeth said:

Woot!A  I do sometimes complain about the seedier aspects of the virtual world, but where else could I have won the favor of The Virgin Queen herself? If you want to tweet with the royals too, here are some suggestions:

Speaking of the royals, and history, I haven’t done one of my historical book club posts since my introduction to A Distant Mirror in March. I worked furiously on the follow-up post in April, was disappointed with how it turned out, didn’t publish it and, as a result, got a bad case of the blogging yips. Wikipedia describes the yips as “an apparently baseless sudden loss of ability in one of a number of different sports” and notes that athletes affected by the yips sometimes recover, sometimes work around the problem by changing technique and sometimes are “forced to abandon their sport at the highest level.” I did try changing technique by taking pictures for a photographic follow-up to the original post but the yips remain. To make matters worse, I can’t bear to write another book post until A Distant Mirror is done. Hold me, I’m scared!

**I was granted royal permission to share these conversations.