Twenty-four of our closest friends joined me and MrB for my traditional New Year’s Eve/belated birthday celebration on Thursday night. We had dinner at Balthazar, which has also become a tradition.

I already gave you a glimpse of the Zang Toi gown I wore. Here’s the whole look. 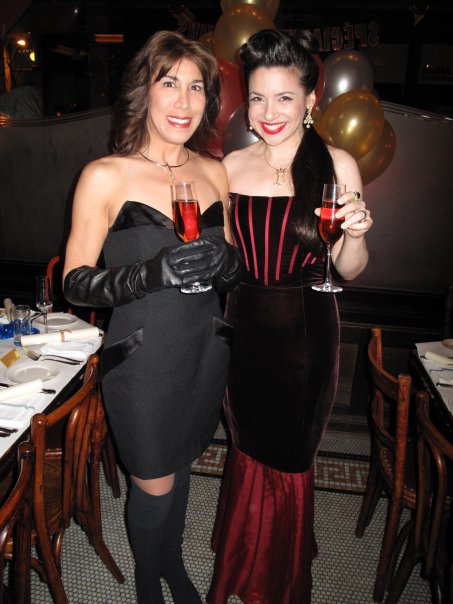 Raising the first glass of Champagne with Stacy.

My gorgeous friend Stacy — who, as you can see above, looked amazing in her strapless tuxedo dress and over-the-knee boots — has started a blog of her own. Click here to read her post about the party and don’t forget to add taffetadarlings to your Google Reader.

Zang was there to see his gown in action. You can tell from the menfolk that the dress code was not black tie. I just felt like wearing an evening gown. As I always say: Wear What You Want! Another tip I often give women who try on an exceptional dress (or shoe or necklace or whatever) and then say, “But where would I wear it?”: Throw your own party. 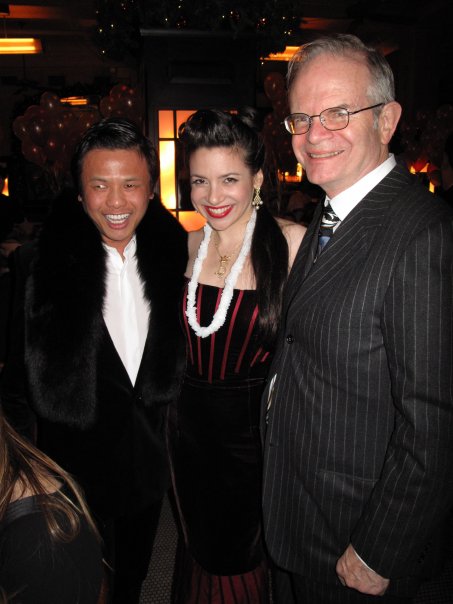 Gorgeous out-of-town blogger Princess Poochie was able to join us, thanks to her thoughtful husband who surprised her with a trip to New York after conspiring with me on NYE plans. I loved her Sonia Rykiel dress — accessorized with her Wendy Brandes swear rings — and I loved it even more when I noticed that another guest, Janet, was Poochie’s sartorial twin. 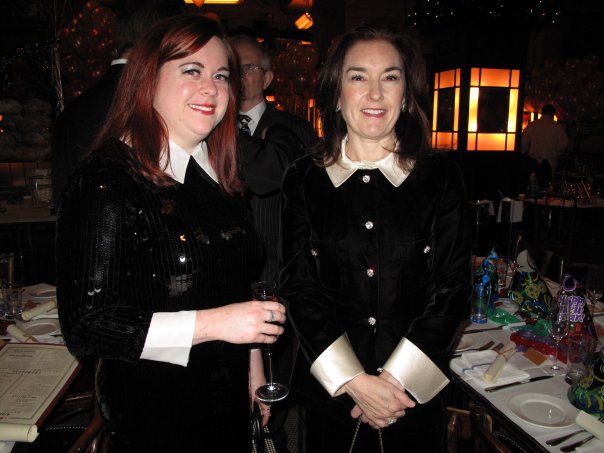 After this, I realized there were “twins” everywhere. It reminded me of my close personal friend Lorraine Bracco‘s lines in Goodfellas:

And almost all of them were named Peter or Paul. It was unbelievable. There must have been two dozen Peters and Pauls at the wedding. Plus, they were all married to girls named Marie. And they named all their daughters Marie. By the time I finished meeting everybody, I thought I was drunk.

Well, Lorraine’s character’s experience was a little extreme, but I did have two Tinas in attendance. Here’s a picture Tina Anderson took of Tina Tang taking a picture. 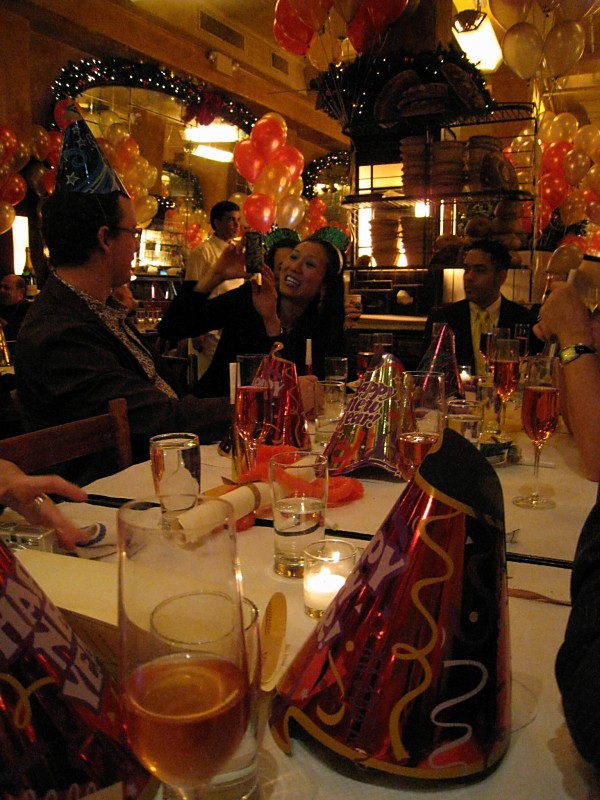 Two Tinas were involved in the creation of this photo.

Meanwhile, Bryan, Tina Tang‘s husband, had a twins moment with MrB, thanks to some flashy party favors. 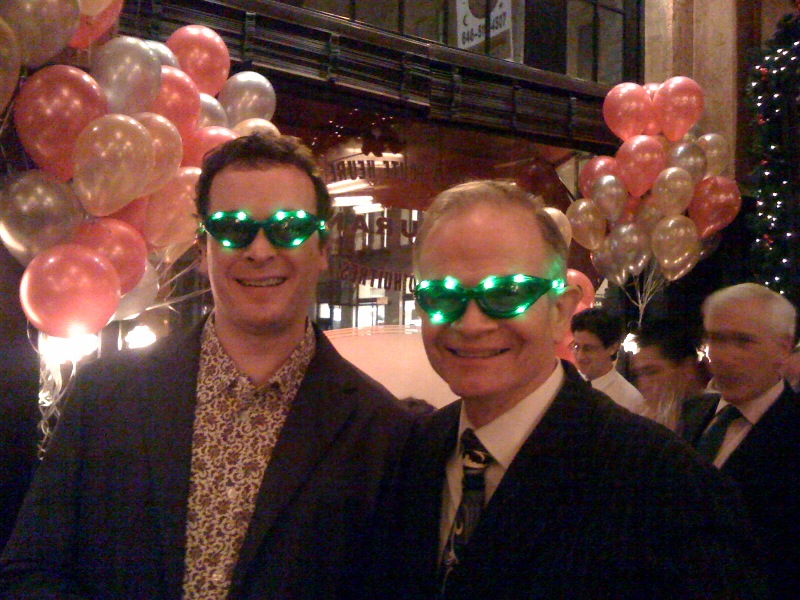 Forget the Blues Brothers...here are the Greens Brothers.

Tina Anderson and I were sitting in the exact same seats we were in last year but forgot to take a picture of ourselves striking last year’s pose for the full twins effect. We did manage to pose with pretty balloons.

I also had two Steves and two Elizabeths in attendance. Here’s one of the Elizabeths … gorgeous Prozac Nation author Elizabeth Wurtzel. I’ve loaned Elizabeth my Gloriana necklace in the past and as I took this photo of her cleavage, I deeply regretted not loaning her the Gloriana again for the evening. It would have looked good there! 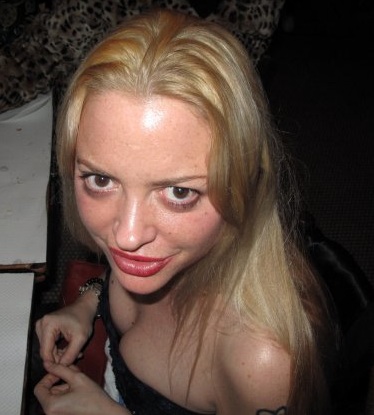 Elizabeth and her twins.

While Gloriana the necklace wasn’t there, my amethyst and tsavorite Marie Antoinette ring was. I wore it along with my Boleyn necklace. The ring recently returned from a long stay with the costume department of Sex and the City 2. Wouldn’t it be great if it made it into the movie? Here is Marie Antoinette modeled by Alyssa, who was also wearing an onyx ring she got from me a few years ago and a fabulous gray manicure. 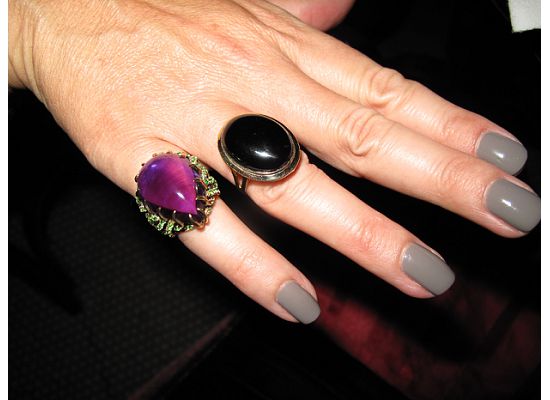 Speaking of Alyssa, there was only one of her, but… 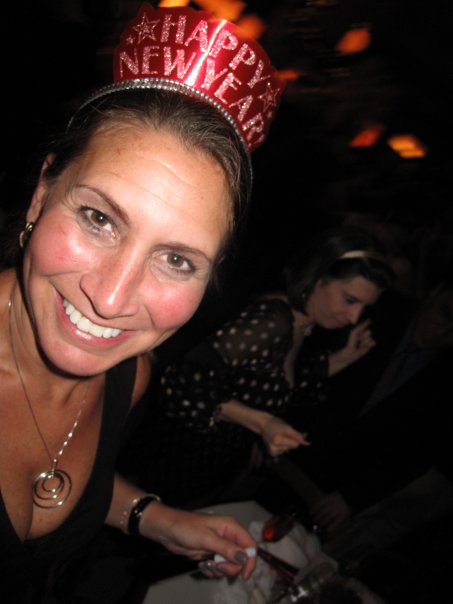 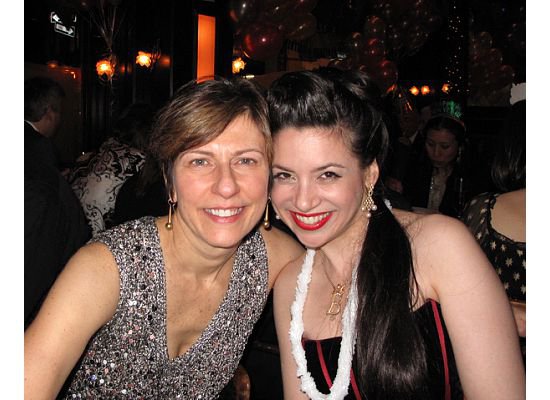 Melissa and me. Check out Melissa's WendyB earrings.

The Pestas are siblings but not twins. I’ve known Jesse since my days at the Wall Street Journal, back in the early ’90s. Abby works at Marie Claire and was the editor of the essay I wrote for the magazine in 2008. 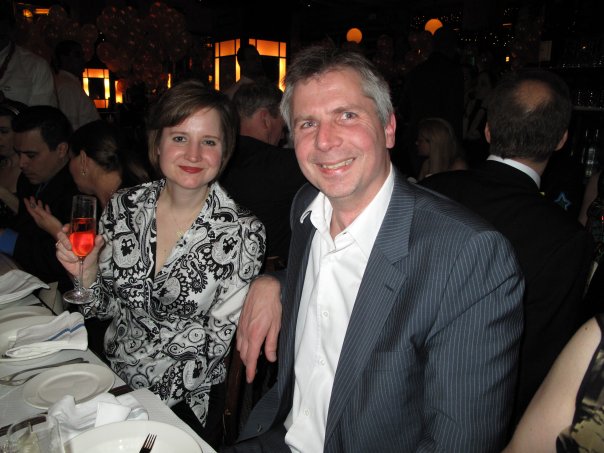 Abby and I were amazed to realize that we’d had similar professional drama in the recent past. Twins! We’re going to set a long-overdue date for French fries at Odeon so we can have a more in-depth discussion.

Other guests not yet mentioned were Jim, Karen, Andrea, Jen, Amanda and Adam. After midnight, some of us took to the dance floor, including Kevin — not guest Kevin, but Balthazar maitre d’ Kevin who helps us have a great event every year. 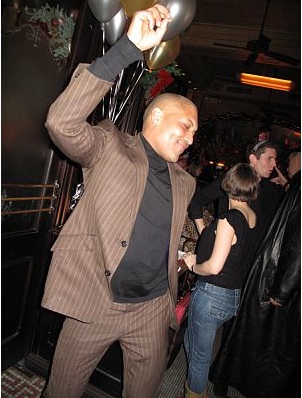 Balthazar Kevin gets down.

On the way out, Stacy and I gathered up two bunches of balloons and managed to stuff nearly all of them in the trunk of the car — all but two. 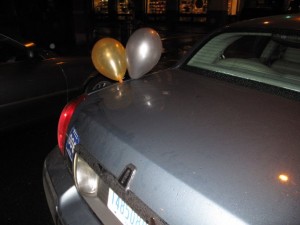 One of those didn’t make it home, but the other survived to join me in a final full-length pose outside. 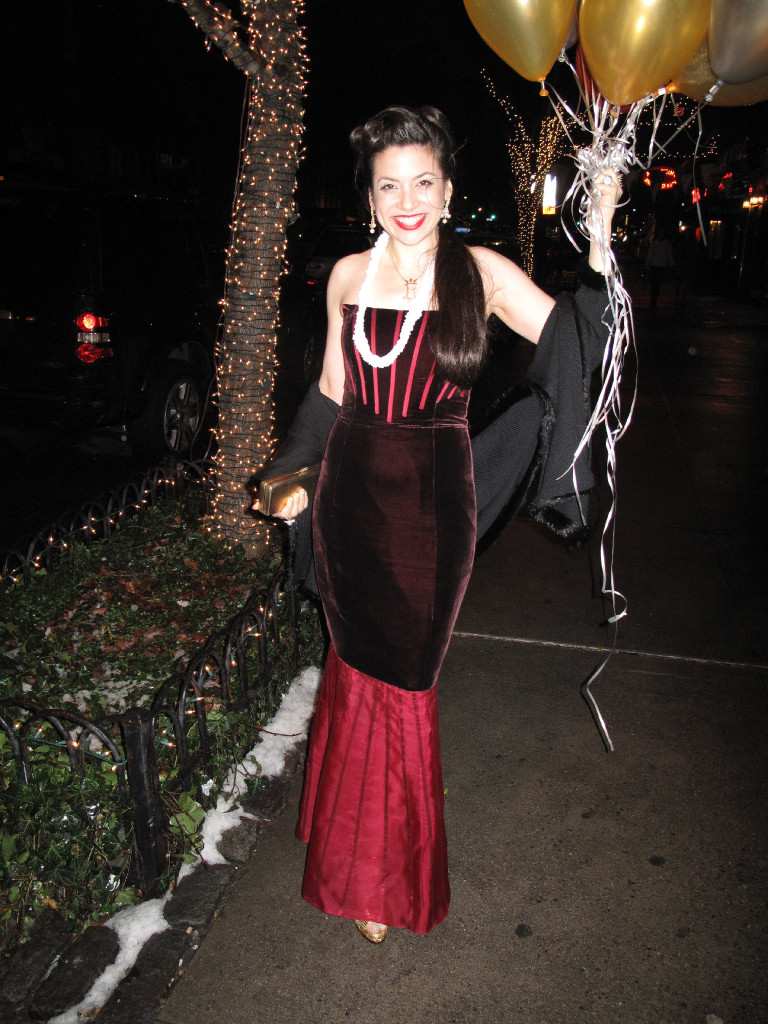 I had to get one more shot of the gown.

Back inside, we took a picture of the gold Louis Vuitton shoes that are my go-to party shoes. Gigi the dog decided to get in on the action. 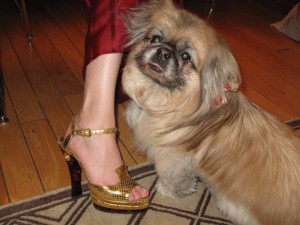 She must have known I needed one final pairing for this post. Or maybe a post-midnight Gigi photo is now a tradition. Anyway, here we are on January 1, 2006. 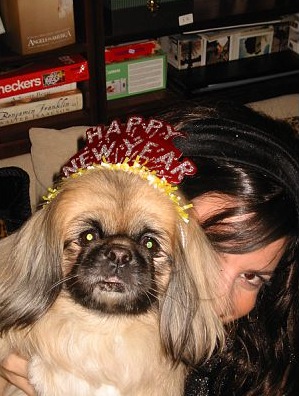 Happy New Year, from me and Gigi!

You might also like
Update on Topshop's Version of My Swear Rings
Throwback Thursday: CPJ Outfits From 2007-2017
What Wendy Wore: Warm-Weather Thanksgiving
Previous Post: « A Decade of New Year’s Fashions
Next Post: Get Smart (About Manufacturing) »