When I get a particularly amazing piece of clothing, I don’t like to show it to people — or even tell them about it — until I get to wear it. That can take months or, occasionally, years.

I’m making an exception to my rule due to gorgeous blogger Couture Carrie, who last month wrote about money-inspired clothing. (Her post happened to include a dress by one of my new favorite designers, Jean-Charles de Castelbajac.) 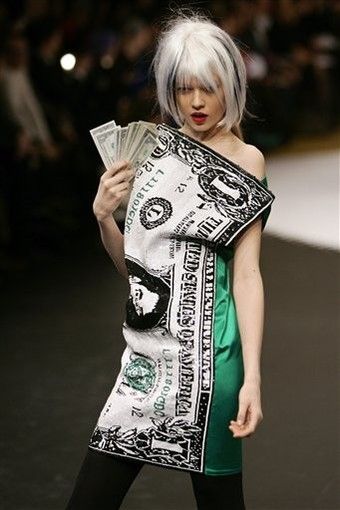 Naturally, I had to point out that Christian Francis Roth did dollar dresses in 1991. His were on the covers of W and WWD. 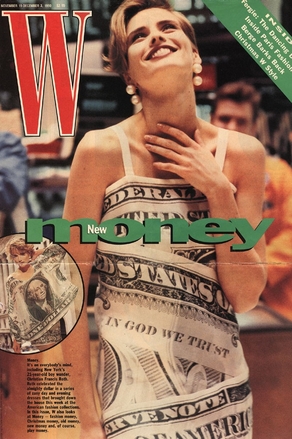 After Couture Carrie added the covers to her post, I felt I might as well admit that I just scored the dollar gown on eBay for very few dollars indeed. But I’m still not going to show it to you: the dress lost its lining and I have to have a new one made (another job for Jean at Ghost Tailor). When I brought the dress to the studio to show Christian, I swear he gave it a hug. He and the dress were like old friends meeting for the first time in many years. I warned him that I plan to wear the gown to a big event one of these days and that I will probably end up on someone’s fashion disaster page again. I think the dress is too tongue-in-chic for most people to handle. He stopped hugging the dress long enough to give me a high five. The only thing better than the best-dressed list is the worst-dressed list, peeps!

It’s pretty hard to come by Christian’s vintage pieces. I only had a jacket and a skirt until now. The Metropolitan Museum of Art has a whole bunch of pieces that I covet. I’m still looking for the famous Rothola crayon dress. If you see it on eBay, don’t even bother trying. I WILL win it.

Anyway, here’s a full-length view of the dollar dress from New York Woman magazine. It’s a bit longer on me than it is on the model. 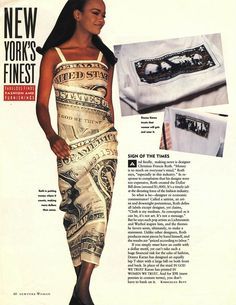 And finally, making news is designer Christian Francis Roth. “Money is so much on everyone’s mind,” Roth says, “especially in this industry.” In response to complaints that his designs were too expensive, Roth created the Dollar Bill dress (around $1,400). It’s a timely jab at the dictating force of the fashion industry.

So what is he — designer or economic commentator? Called a satirist, an artist and downright pretentious, Roth defies all labels except designer, yet claims, “Cloth is my medium. As conceptual as it can be, it’s not art. It’s not a message.” But he says such pop artists as Lichtenstein and Warhol inspire him, and the themes he favors seem, ultimately, to make a statement. Unlike other designers, Roth produces most pieces by hand himself, and the results are “priced according to labor.”

Nowadays, Christian is not sewing his new Francis line himself. That would be insane. Limited-edition, handmade dresses direct from the designer’s own hands … produced in New York, no less? Pieces like that would need to sell for $14,000, not $1,400. The priciest piece in the Spring ’09 collection was the Francis graffiti dress, which was $695. 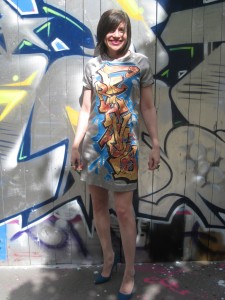 Check out the alteration I made to my graffiti dress here.