Yesterday I neglected to celebrate the 500-year anniversary of the day that my dear friend, Henry VIII (also known on the internets as Henry teh 8), acceded to the English throne. 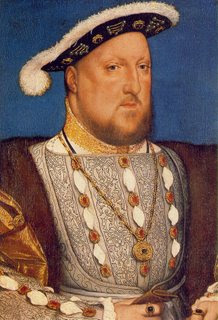 I doubt I would have remembered at all if gorgeous blogger Princess Poochie hadn’t sent me a story about one of Henry’s love letters to Anne Boleyn going on display in England to mark the anniversary (note: this story gives the date of the anniversary as April 22, but everything else I’ve seen says April 21). How appalling! My dog is named after the man, for God’s sake.

I’ve written about Henry-related topics many times on this blog. Here are some of the key links:

I still have two wives to cover: Katherine Howard and Katherine Parr. Unfortunately, I’ve had a touch of don’t-want-to-blogitis recently. My gorgeous mother, BarbaraB, diagnosed this dreaded disease based on the terseness of my recent posts. Mother knows best! As soon as I recover, I hope to get back to A Distant Mirror and Henry’s wives.