The health-care situation in the U.S. is terrible. But I can’t stand people who act like health care in other nations is sheer perfection. I’ve been following the sad story of a U.K. reality-TV personality named Jade Goody who is only 27 and has advanced cervical cancer. She suffered from symptoms for THREE YEARS and went undiagnosed despite multiple emergency visits to the hospital for pain. Three years! I would sue a bitch’s ass for a three-year-long misdiagnosis even if it was (literally) the last thing I did. This poor chick has already had a hysterectomy and is now facing a year of chemo because the cancer is so widespread. 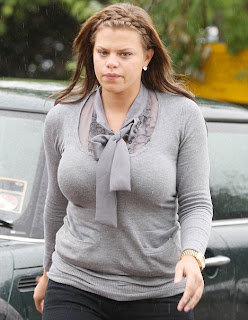 Poor Jade Goody
I hope someone investigates the doctors who ruined this woman’s life. Oh, and on top of the cancer she has to deal with things like this.
You might also like
Remembering the "Social Distancing" of AIDS
Recommended Reading: The Coal Country Canard
A Bit of Beauty for Istanbul
Previous Post: « More Family Fotos
Next Post: Feeling Squirrelly? I’ve Got the Solution. »