I paid for a recent transaction at the post office with a $50 bill. As the cheerful (kidding!) postal worker counted out my change, we both noticed some writing on one of the singles she gave me but neither of us paused to look closely. It was only after I got home that I carefully examined the bill. Henry helped. 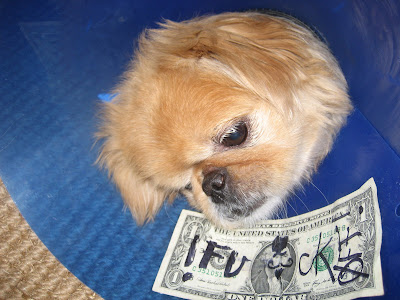 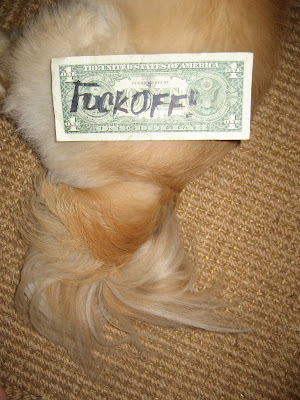 What is the best thing to do with a defaced dollar? (By the way, defacing currency is illegal, so shame on you, whoever you are!) Maybe I should frame it, like some businesses do with the first dollar they earn. Or I could leave it as a tip at a restaurant where I’ve gotten really bad service, assuming I am close enough to the door to flee before the waiter sees it. I really could have used it about a week ago when I was dealing with a vendor who had provided horrible service and then presented me with a bill for nearly $5,000. It would have been fun to send the crap vendor this dollar and a check for $4,999. Or better yet, just the dollar, which is all they deserved.

UPDATED TO ADD: To those people who have asked me about Henry’s paw, thanks for your concern! Unfortunately, Henry is still having problems and will be wearing the e-collar until we figure out a way to relieve his discomfort. We’re going to have another surgical consultation soon.