Whatcha doing tonight? Spending quality time with the family, you say? Ha! I knew you weren’t doing anything important. You have no excuse not to watch this ProPublica/60 Minutes report on the U.S.-funded Alhurra television network, which spews anti-American propaganda in the Middle East, with a dash of Holocaust denial to add flava. If you can’t get to the TV, you can read the story here. (Remember, ProPublica is Mr. B’s project.) 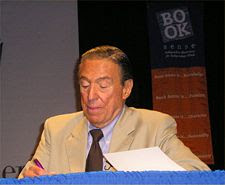 Speaking of 60 Minutes, I recently saw a Family Guy episode where Death is sitting in an easy chair, reading a newspaper, as retired 60 Minutes dude Mike Wallace types at a desk. When Mike Wallace stops typing, Death looks up from his paper expectantly. Wallace resumes typing and Death goes back to the paper. I thought this was screamingly funny, but then I thought, “How would Mike Wallace feel if he saw this?!” Then I laughed even harder. I know! I’m going to hell. See you there. Mike Wallace will probably live to be 190 and bury us all. 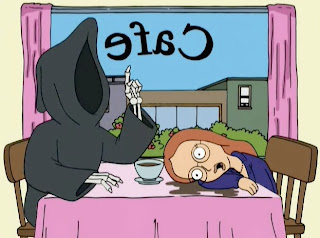 Family Guy’s Death on a date
UPDATED TO ADD: I’ve just seen the show and think the Propublica.org story is much, much stronger than the 60 Minutes version.

UPDATED AGAIN TO ADD: Oh, look who is late to the party! The Washington Post has the story a day after the 60 Minutes/Propublica broadcast. I’m not going to bother to link to it.

You might also like
Samuel L. Jackson Is Here to Make Your Day Better
More Photos From the Rising Star Awards
Spoiler: The Winner of Game of Thrones Is ...
Previous Post: « Latex and Lace, Kova & T
Next Post: Cream of the Cropped on eBay »