There’s no one to dress for, now that Bill Cunningham is gone.

The legendary New York Times style photographer died on Saturday, at age 87, after being hospitalized for a stroke. Though the Times sounded optimistic about a quick recovery on Thursday, when the New York Post broke the news of Cunningham’s illness, I wasn’t surprised that the man slipped away. I couldn’t envision Cunningham going through post-stroke rehab … for what? Would any doctor guarantee that he’d someday be back on his bike, weaving through Manhattan traffic, keeping an eye out for sidewalk fashion statements? Would he be able to go out in bad weather to photograph men in good shoes leaping over puddles, as he did this January?

The way it happened, he worked industriously and lived independently almost to the very end. I imagine he would be pleased with that.

For the rest of us, it feels like part of New York City suddenly disappeared. No wonder: The sight of Bill — often on his bike, wearing his bright, blue, French workman’s jacket — was so much a part of New York that the New York Landmarks Conservancy named him a “living landmark” in 2009. It was always worth whipping out the iPhone for a Bill spotting even though, as the Times wrote in its obituary, “He wanted to find subjects, not be the subject. He wanted to observe, rather than be observed.”

Spotted at a @zangtoi show in 2014 … Bill Cunningham and Andre Leon Talley having a chat. Feels like there’s no need to dress up anymore! #ripbillcunningham

Being Bill’s subject was definitely the ultimate fashion high. As Vogue editor-in-chief Anna Wintour said in the 2010 documentary Bill Cunningham New York, “… We all get dressed for Bill.” That was my go-to answer whenever someone tried to drag me into that hackneyed debate of “Do women dress for men or other women?” I mean, seriously! Who would dress for anyone except Bill Cunningham? 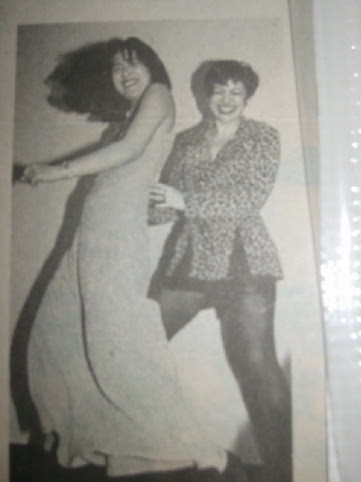 One of the things that made Bill special was his journalistic approach to street-style photography. Sure, he did spend plenty of time shooting Wintour and other denizens of the Conde Nast and Hearst buildings. But he was never limited to the fashion professionals. As Lauren Collins wrote in the New Yorker in 2009:

One example of his own whimsy: The time he matched my Ossie Clark dress to the background in an adjacent photo. 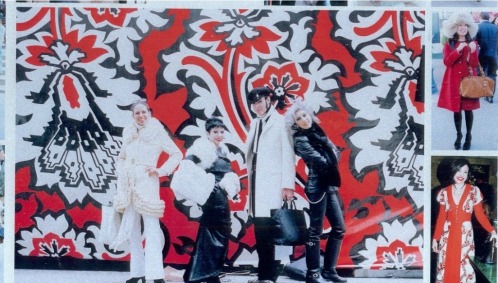 The few times I made it into Bill’s columns, I always declared that it was the best day ever and I would never ask for anything else in my life. (Then I would realize I wanted to be in his column again.) It was usually at a social event, for which I’d carefully selected a vintage dress … 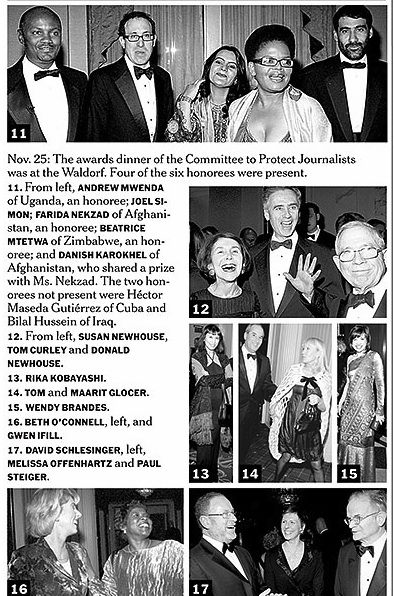 … or a design by my friend Zang Toi (a frequent Bill subject). 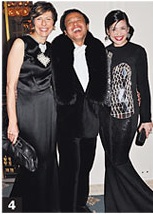 Bill knew his vintage designers like no one else. “Ossie Clark?” he’d ask me. He recognized my favorite leopard-print gown as being by Patrick Kelly. When he told me that Kelly, who died in 1990, had been a “sweet man,” I reacted like I’d gotten the hottest fashion gossip ever. But obviously a man who shoots stylish puddle-jumpers wasn’t hung up on designer names. I still don’t know who made this dress. 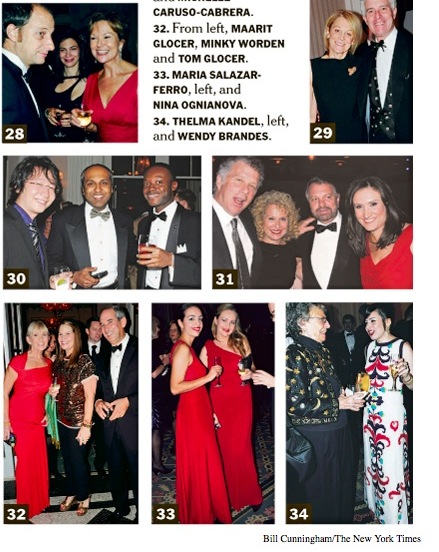 From 2011. I’m in the lower right corner in the white dress with a print.

Interestingly, Vanessa Friedman of the New York Times, wrote in her tribute to Cunningham that, “…the truth of it is, he wouldn’t have wanted anyone to dress for him. He wanted to understand and record how they dressed for themselves.” But I feel like “dressing for Bill” at these big events helped me dress exactly like me. He inspired me to go for the slightly crazier thing that I truly wanted to wear, as opposed to the safer piece that would blend in. I gained confidence knowing that there was one person out there who would appreciate it, even if no one else did. I dressed for Bill — and me — even when I knew he wasn’t going to be there, like when I wore my dollar-print dress to an event in Los Angeles. 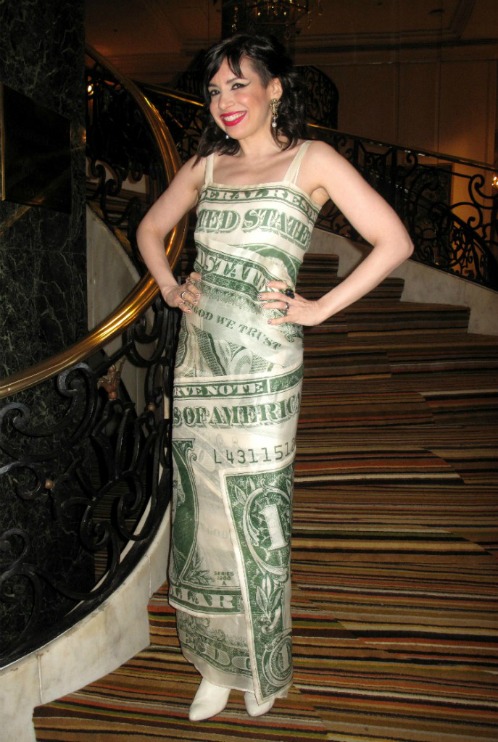 As for daytime wear, I never did start swanning around his preferred corner of 57th and 5th in not-me outfits, even though one of my jewelers used to work right next door so I saw Bill often. I stuck to the uniform of black t-shirts and jeans that I’ve worn since leaving the corporate world. (I was a little heartbroken that Bill was preoccupied with buying a soda the one time I fluttered past him in an Ossie Clark dress in broad daylight, on my way to a friend’s luncheon.) So I feel confident that I didn’t change myself for him, but became more myself, fashion-wise, thanks to him.

Thinking of it that way, I realize I will still be dressing for Bill, always. But it will never mean as much without him here.

There have been so many great tributes to Bill as well as links to older stories. My favorite by far is a 2002 New York Times piece by Cathy Horyn, which is a kind of oral history of people who were photographed by him and people who worked for him. The comments from Annie Flanders, the founder of Details Magazine, on Bill’s refusing to take money say so much about him.

CLICK HERE TO READ CATHY HORYN’S STORY.
Here are some other links, and I’ll be adding more.

Some of my own posts mentioning Bill are here in chronological order:

And here are great quotes from Bill himself, captured in the documentary: