MrB and I have been visiting Madrid and Pamplona so that MrB could speak to journalism students and alumni at the #CelebratingJournalism events organized by the School of Communication at the University of Navarra.

For those who don’t know, MrB (also known as Paul Steiger) was the managing editor of the Wall Street Journal for 16 years. During his time there, the paper won 16 Pulitzer Prizes. When he hit the Journal’s mandatory retirement age in 2007, I told him there was no way he could hang around the house all day, staring at me and the pets, so in 2008, he became the editor-in-chief, CEO and president of the nonprofit investigative journalism organization ProPublica. In 2010, ProPublica became the first online news operation to win a Pulitzer Prize. It won a second Pulitzer Prize in 2011. At the end of 2012, MrB became executive chairman of ProPublica’s board of directors, succeeded as editor-in-chief by Steve Engelberg, and as president by Dick Tofel. MrB is still busy with ProPublica strategic work every day. He also gets a lot of requests to speak about the future of journalism, which is what he’s been doing in Spain, on the theme of “Investigative Journalism as a Public Service.”

On Tuesday, he gave a speech and did a Q&A in a packed auditorium at Fundación Rafael del Pino in Madrid. (There were two overflow rooms in the building where people could watch the livestream. This came after he met with journalists separately and did numerous interviews. The organizers called it “the Madrid Marathon”!) Journalist Carlos Salas was the moderator, introducing MrB’s 25-minute talk and then relaying the attendees’ questions about Sean Penn interviewing El Chapo; Donald Trump’s presidential campaign; and Jeff Bezos’s purchase of the Washington Post, among other topics. The organizers of the event were very excited that their hashtag, #celebratingjournalism, became a trending topic on Twitter in Spain.

The next day, we flew to Pamplona — where the bulls run in July — so MrB could meet with and speak to the undergraduate journalism students at the university there. (Madrid was more for alumni and grad students.) While I attended the Madrid speech, I didn’t go to the Pamplona event because I was touring the city with gorgeous student Cristina Muñoz Sagastibelza, who also took me around in Madrid. But we kept tabs on MrB thanks to a new hashtag: #SteigerUnav.

If you want to know more about what MrB had to say about the current state and future journalism, you can explore the hashtags as well as check out some of the press:

I’m partial to the El Mundo story because it starts by saying (roughly, according to Google Translate and my own vague memories of Spanish), “He looked tired from going back and forth, but there was an unexpected spark of youth for someone who is 73, with a long career behind him.” BWAH! Personally, I get annoyed when someone says I look tired, because I’m always trying to NOT look tired, and I want other people to go along with the charade. But that doesn’t compare to how annoyed I was when a woman in Pamplona asked me if I was Cristina Sagastibelza’s mother. In the future, if anyone gives me a choice between being described as tired or the mother of a college gal I’m drinking with, I’ll pick tired.

Anyway, the Throwback Thursday part of this post comes courtesy of MrB. At the Madrid event, he was speaking about how, in the past, if you wanted to be part of the media, you’d have to invest millions of dollars in a staff of journalists and a printing press. Now, he said, anyone can be a publisher instantly, as I was when I started this blog. I was so mortified when he joked, “Stand up and wave” to me that I can’t remember everything he said after that, but apparently he gave me a big plug. He was about to move on to a different topic when he remembered I’d written about the 15th/16th-century Spanish queen known as Juana la Loca and told everyone to look it up. No need to look it up. Here’s the link to my 2008 Juana post.

When you read it, you’ll find out why my Juana-inspired jewelry features skulls. I did bring some Juana pieces to Spain with me. This Juana necklace enjoyed some tapas and wine with me and my newfound daughter, Cristina.

The fact that I brought two Juana pieces consoles me, slightly, for my failure to bring my Bull and Bullfighter Maneater ring to Pamplona. Yep, I went to the city with the bulls made world-famous by Ernest Hemingway’s The Sun Also Rises, and I forgot to bring my bull ring. Let’s pretend I didn’t do that. 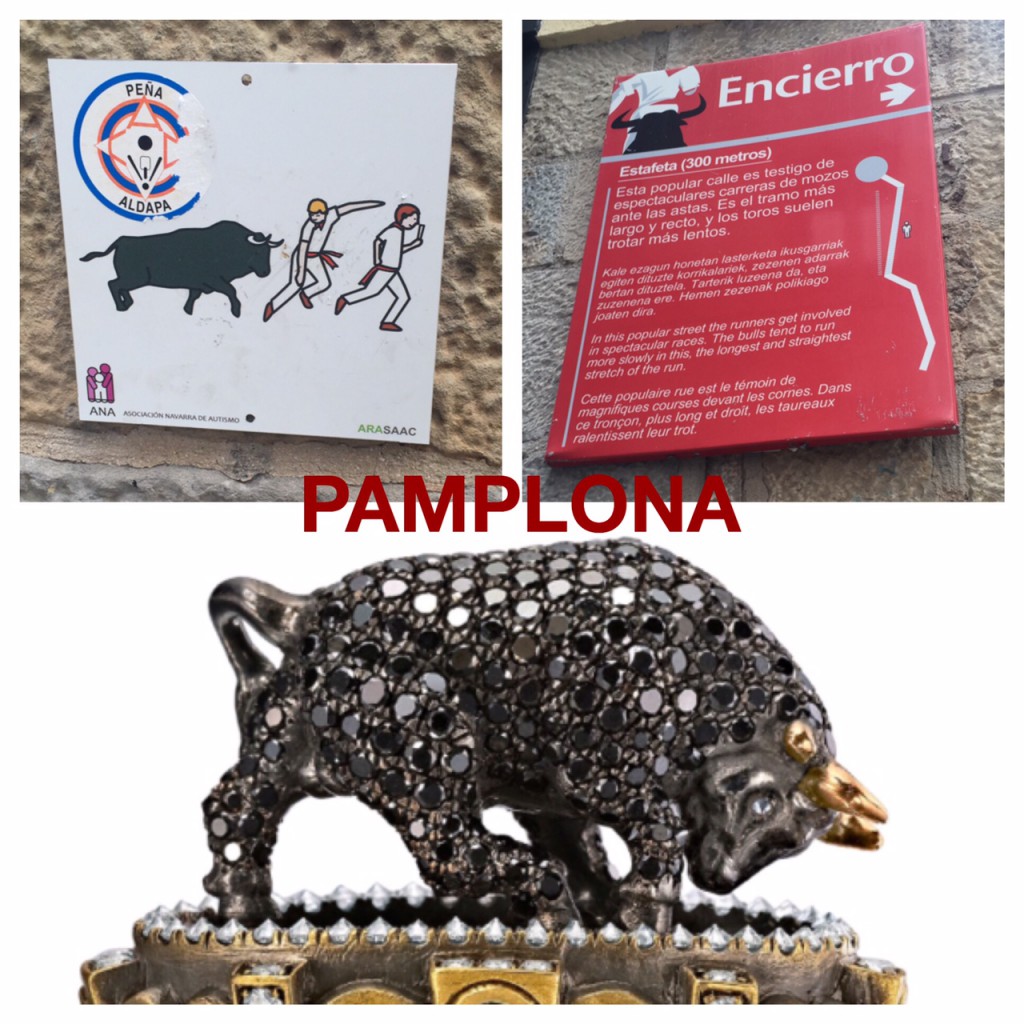 I could have held the ring up to one of those signs for a picture!

Remember that when it comes to my ring, the bull is the winner. It’s a “maneater” design, after all.