Petite pop star Ariana Grande and her rapper beau, Big Sean, have split after eight months of dating. In a statement to US Magazine, they said they “remain close friends,” which hopefully means that Sean won’t make Ariana the target of an angry song like his 2014 “I Don’t Fuck With You,” which may — or may not — have been inspired by Sean’s previous gal pal, Glee actress Naya Rivera. 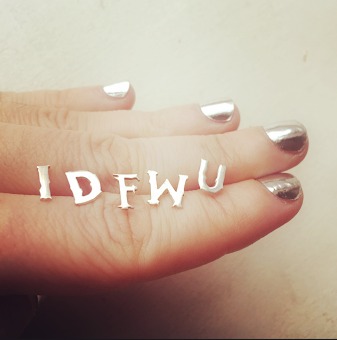 I haven’t done an IDFWU necklace yet, but here are some stud earrings of mine to show you how it would look!

If the Ariana-Sean breakup isn’t really amicable and results in a spiteful song, Ariana might cry and, let me tell you, that’s hard to take. When Ariana cries, it’s like seeing a kitten cry. Like a kitten, she’s tiny and cute … and her enviably perfect cat-eye eyeliner and cat-ear headbands add to the experience.

I saw Ariana cry more than once last month, when I caught her Honeymoon Tour at Madison Square Garden. My gorgeous friend Alyssa had won four tickets from her cable provider, Time Warner, and I don’t say no to a free concert. (Hey, Verizon Fios, what have you done for me lately?!?) I’ve seen performers get very emotional about playing the Garden, especially the first time they are there, but Ariana seemed especially overwhelmed. It was quite touching, though it would have been more so if she had addressed the crowd with some more eloquent term than “you guys.” But Ariana is only 21 and Madison Square Garden IS imposing, so I gave her a pass. I’m sure her 5-to-15-year-old fans weren’t judging at all. That crowd seemed, on average, even younger than the one I experienced at Katy Perry’s Barclays Center show last year, but my friends and I didn’t feel out of place among the teeny-weeny Arianators. We were the same age as all of the mommies!

But forget the baby audience and Ariana’s weeping: My main focus at the concert was the aforementioned cat ears. Ariana has gotten very well known for those cat ears. When she wore them last September for an appearance on Saturday Night Live (Caturday Night Live?), I was entertained by the number of people taking to Twitter to complain about the ears.

It reminded me of the folks complaining during the 2010 Grammys that Lady Gaga dressed too outlandishly. Apparently, celebrity branding is tough to comprehend. I had already felt compelled to address the Gaga costume issue the previous year:

“I noticed a lot of people asking, ‘Why can’t Lady Gaga just dress normally?’ Is that a serious question? I’ll answer it, just in case: Because then she wouldn’t be Lady Gaga. She’d be a schmuck like us, sitting at home dribbling Cheeto dust (or, in my case, Cadbury crumbs) onto our keyboards while posting poorly spelled fashion critiques about more adventurous people who have launched themselves into superstardom.”

“…for music artists, from Freddie Mercury to Madonna, fashion is key to creating an identity and rising to the top in a field that is now, in the Internet Age, even more crowded.”

I’ve observed that in the music industry, when the world at large starts getting irritated or bored by the consistency of a performer’s image … that’s exactly when the performer has won. The brand image has been now been formalized. Fans have an easy way to telegraph their allegiance to their favorite and even non-fans can be forced to acknowledge the person in the costume. You don’t have to be pop-culture obsessed to be familiar with Gaga’s 2010 MTV Video Music Awards meat dress. Hell, it was all over the news. And this was nothing new. Disapproving parents who never listened to Madonna in the 1980s were outraged by her “Boy Toy” belt buckle.

Before Madonna, it was the Beatles and their shockingly long hair. After Madonna (and like her), there was Britney Spears and her abs. It doesn’t matter if the musician or musicians move on to new styles. You can still reference Ziggy Stardust and people will get it, even though David Bowie retired his most memorable persona over 40 years ago. 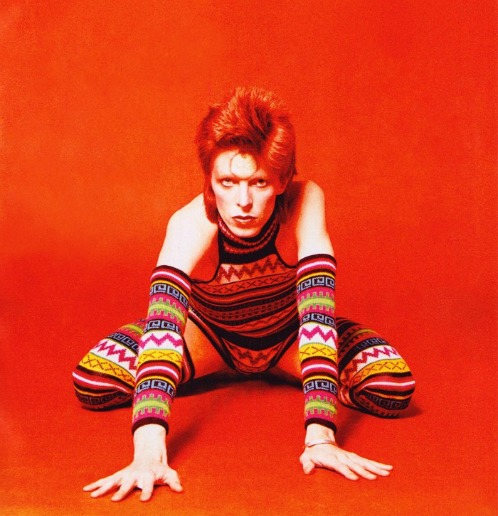 Obviously, Ariana Grande’s little cat ears haven’t impacted popular culture like anything done by the Beatles, Madonna or Bowie, but they’re doing their job, which is helping her make bank. Not simply by making her recognizable, but by being merchandisable. As soon as I walked into the Garden, I clocked lots of Arianators wearing light-up plastic cat ears, all changing colors simultaneously. I was already thinking, “You see? THAT’S why she keeps wearing the ears” …

… then the show started and I saw the ears blinked in time with the music. Brilliant! Merch that really makes the audience part of the show! As the New York Times reported:

“…throughout the night, the cat ears worn by thousands of girls in the audience — $40 a pop — lit up in time with the music.”

Based on my manufacturing experience, I’m going to guess that the ears cost no more than $5 per unit to make in quantity in Asia. Ariana & Co. might be making as much as $20 on each sale.Thousands of sales at each show, with nearly 80 shows scheduled. Thanks in part to those cat ears, if Big Sean comes up with a new “IDFWU” song, Ariana can — to borrow a line from comedian Ray Romano — “go cry on a bag of money.” Not that money heals a broken heart, of course, but it can pay for a lot of retail therapy while you’re in recovery!

You might also like
Musical Moment With Marshall Mathers
For Doors Stans: Pamela Courson's Mother Has Died
Back to the '80s With Jessie's Girl
Previous Post: « The Weeks in Review
Next Post: You’ve Cat to Be Kitten Me! Random Thoughts. »