“… at Oscar de la Renta, an era seems to be nearing a fine and tidy end as the designer prepares his company for its next chapter – one without him. De la Renta has hired his first creative director. And he has at last won over Michelle Obama. His work is done.”

De la Renta had been diagnosed with cancer in 2006, and the New York Times described him as looking “frail” at his fashion show in September. Copping was scheduled to start work on November 3, with his first de la Renta collection to be shown during New York Fashion Week next February. He was still supposed to report to de la Renta, however. Oscar worked right up till the end and it wasn’t just busywork. He was still nabbing headlines, most recently with his bridal-gown design for lawyer Amal Alamuddin’s wedding to George Clooney. (An Amal-inspired gown is part of next year’s de la Renta bridal collection.)  Last year, he hired disgraced designer John Galliano when no one else would and, in 2012, he indulged in a meat-themed feud with New York Times fashion critic Cathy Horyn. This year, Horyn wrote in Harper’s Bazaar that she was still friendly with the designer and shed some light on his motive:

“… if there’s one thing I know from covering Oscar for three decades, it’s that he’s intensely competitive. A good fight, even a phony good fight, magnifies power. It also creates a ton of publicity, as Oscar reminded me with a grin when I saw him a few weeks later.”

Over the years, de la Renta dressed many First Ladies, which is why it was news when Michelle Obama wore one of his designs this month. Another recent de la Renta design I liked was the one Sarah Jessica Parker wore to the Metropolitan Museum of Art’s Costume Institute gala. The ballgown’s skirt was adorned with Oscar’s bold red signature.

Speaking of SJP, one of the great fashion moments on Sex and the City was when her character Carrie was given a coveted pink de la Renta cocktail dress by her artist boyfriend Aleksandr Petrovsky (Mikhail Baryshnikov). Carrie faints outside Lincoln Center and winds up wearing the dress as she and “the Russian” dance and dine at McDonald’s instead. 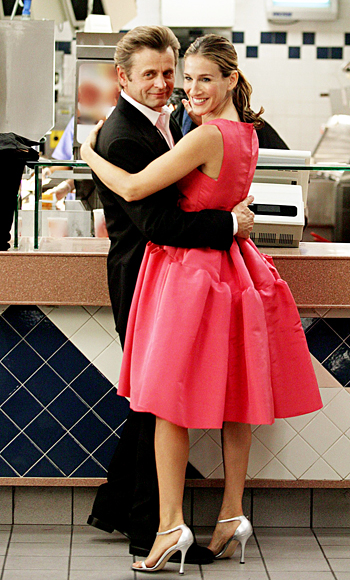 That episode aired Jan. 11, 2004. I was so struck by the de la Renta that, by the next month, I was wearing a full-skirted vintage cocktail dress to a big party and having an exceptionally fun evening thanks to a dress that attracted everyone from Renee Zellweger to a local official’s hooker friend. I feel that de la Renta would have enjoyed that story, considering what he said at an event at the 92nd Street Y in Manhattan last year, when his cancer was still in remission. Fashionista.com quoted him:

“The only realities in life are that you are born, and that you die. You have to appreciate every single day that you’re alive. Life is a little bit like a garden—you have to find time to plant the seeds for beautiful flowers to grow. I’m having a fantastic time.”

A fantastic time — you can’t ask for anything better than that.

You might also like
RIP, Virgil Abloh
Dick Clark, Madonna and My 1980s Jewelry
In the News Today: Muhammad Ali and More
Previous Post: « Today Was a Good Day
Next Post: More on Oscar de la Renta »