I was managing editor of People Magazine’s website in 1999, and I’ve subscribed to the magazine ever since I left that job. Today, I was flipping through the Sept. 15, 2014, issue and came across an item about the recent celebrity nude-photo hacking. Because it slut-shamed and blamed actress Jennifer Lawrence and model Kate Upton for their own violation, I initially thought it was a story about comedian Ricky Gervais, who was criticized for “joking” on Twitter (in a totally matter-of-fact and humorless tone) that celebrities who don’t want their nude photos exposed shouldn’t take nude photos. But no! It was an editorial comment from People itself — interestingly, the only item in the magazine’s Scoop section that was minus a byline — declaring that celebs should “Just Say No to Naked Selfies.”

This piece reminds me of the time on Family Guy when Peter Griffin says, “Yeah Brian, you’re doing the same thing that Mia Farrow did to that Chinaman that Woody Allen brought home from the circus!” and Lois responds, “Peter, hold on to that thought, because I’m gonna explain to you when we get home all the things that are wrong with that statement.” There are THAT many things wrong with People’s short item.

For a start, despite trying to protect itself with a “rightly so” aside that feigns a modicum of sympathy for the victims, the magazine says the celebrity women claimed a violation and blamed a hacker, as if those things were in doubt.  Then there’s People’s uneasy relationship with technology. People Magazine couldn’t deal with the Internet when I was there in 1999 — four years after a top executive called the corporate parent’s Internet operations a “black hole” — and it still can’t. The Scoop item puts the word “cloud” in quotations, like it’s not a real thing that its own employees use all the time. Then it compares the cloud’s security to the rhythm method for birth control and, in case you missed the point, quotes the definition of as atmospheric, weather cloud from the Oxford Dictionaries. OMG! All our Internet security depends upon water vapor!

The capper is the last line about Upton:

“…and Upton will go back to doing whatever it is that Upton does, which — as far as we can tell — involves taking almost-naked pictures for magazine covers.”

I. Am. Astonished. First, Upton is a professional model and if she chooses to disrobe partially or completely in order to make a living in front of the lens that does not mean her body is up for grabs at all times. I mean, I sell jewelry, but if I say a particular piece is not for sale, that doesn’t make it legal for you to take it from me by force.

Additionally, those “magazine covers” People refers to so derisively include Sports Illustrated. 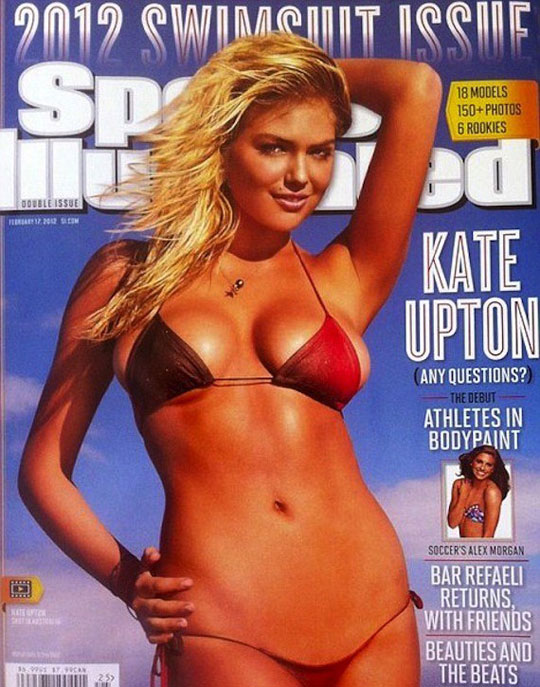 Sports Illustrated is a Time Inc. publication, as is People. People’s staffers are throwing shade at Kate for doing business with their own corporate colleagues! (Earlier this year, People celebrated the 50th anniversary of the Sports Illustrated swimsuit issue by calling it a “landmark development for … the magazine industry” and selecting the 17 most memorable covers. Not a word about the long-running criticism of the swimsuit issue, which has been called sexist by numerous critics over the decades.)

Making its anti-woman attitude crystal clear, People included a shirtless photo of actor John Stamos — one that the actor willingly shared with the public — with the caption, “The exception to this public service announcement is John Stamos … who should continue to post shirtless pictures on Instagram anytime he wants.”  No slut-shaming for John; apparently, men’s bodies just aren’t inherently bad like women’s. There’s some kind of Adam and Eve original sin stuff going down here.

The ultimate absurdity is that People thrives on getting private information about celebrities. If celebrities don’t cooperate, the magazine does “write-arounds,” interviewing other sources and running the story anyway, “writing around” the lack of a real interview. (Write-arounds can be great investigative reporting at certain publications, but I don’t recall seeing many of those in People. A People write-around signals a lack of access, not an important expose.) Basically, People WANTS to get its hands on celebrities’ private stuff but then mocks celebrities for having anything private.

This is big bucks for Time Inc. People was the biggest part of the company when I was there and in the ensuing 15 years, despite all the new competition online, the magazine is still the most important Time Inc. property. Last month, in a story on new People editor Jess Cagle, the New York Times reported:

“People generates more revenue than any of the company’s more than 90 magazines and 45 websites, bringing in $1.49 billion in 2013, according to estimates from the magazine industry consultant John Harrington.”

That’s a lot of money dependent on celebrities’ private business. If I were a famous female, I wouldn’t cooperate with People in any way until Jess Cagle publishes an apology and promises to review the coverage of women by both People and Entertainment Weekly, where he is editorial director. Until then, let his reporters reduce themselves to calling your local Starbucks and interviewing your barista for a write-around. Watch them wind up writing about what size chai tea latte you order while you publish your wedding photos elsewhere!