Twenty years ago today — April 8, 1994 — the body of 27-year-old Nirvana frontman Kurt Cobain was discovered in the greenhouse of his Seattle home. He had killed himself with a shotgun on April 5. 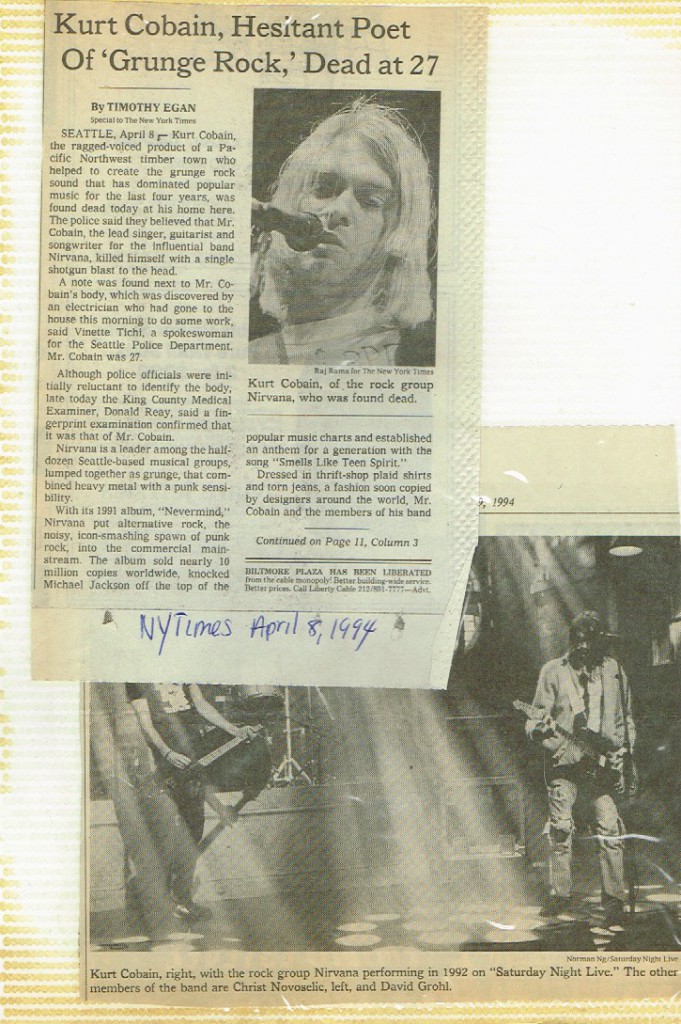 I cut the front-page obituary out of the New York Times and put it in a scrap book. I wrote the date of death on it rather than the date of the story publication.

April 8 was a Friday. I was working at the Wall Street Journal at the time, and my work week was Sunday through Thursday, so I was at home. As soon as the story came across the wire services, a colleague called me to break the news. It was someone with whom I had a very difficult professional relationship at times, but he was very nice when he called. He knew how crazy I was about the band. The colleague — and everyone else at work — had seen me fussing over what I was going to wear when I went to the taping of Nirvana’s MTV Unplugged episode the previous November. I had to go straight from the office and I couldn’t possibly go to MTV in a suit, looking like the corporate person I was, so I’d brought along jeans and motorcycle boots to change into.

As I’ve mentioned before, a very sweet guy who was doing the still photography for Unplugged brought me to that taping. I think he had to pretend I was assisting him to get me in, so I held a spare camera bag and protected his working space like my life depended on it. When MTV VJ Kennedy encroached on a spot that my friend wanted to stand in, I shooed her away. I was okay sitting next to Kate Moss though. I remember when we came in, the MTV crew was moaning and groaning, expecting a late night. The Stone Temple Pilots had taped their Unplugged recently, and they had to keep doing multiple takes of their songs. Everyone was bored and no one could leave — not even people in the audience. You couldn’t have the audience mysteriously fluctuating from song to song when this thing aired on TV. But Nirvana ran through their set with hardly a hitch. One thing that stands out in my mind was that Kurt was musing aloud about what song to do next and a would-be comedian called out, “Kumbaya!” Kurt thought someone had yelled, “Hurry up!” and was quite miffed.

My favorite song from the evening is still the cover of blues singer Lead Belly‘s “Where Did You Sleep Last Night.” I like that you can see Kurt smiling over someone’s offer to sell him Lead Belly‘s guitar for $500,000 before he starts the song. You can also see a little smirk on his face in a photo taken by my photographer friend here.

I’m so sure that I still have the Unplugged laminate I needed to get into the show, but I haven’t found it yet. I save everything, so why not that? I’m going to keep looking.

It’s hard to believe that 20 years have passed. I must say that if you’d asked me on April 8, 1994, what I’d be doing in 2014, I wouldn’t have been able to guess at all. Had I known, I might have been surprised but I wouldn’t have been disappointed. Kurt was only 10 months older than me. Over the years, plenty of people have written “what would Kurt be doing now” stories. I like to think they’re not able to come close with their guesses and, that if Kurt was still around, he would also be surprised at his life but not disappointed.

While I was working on this post yesterday, another story of a too-early death broke: Peaches Geldof, the 25-year-old daughter of Band Aid co-founder Bob Geldof and his wife, the late television presenter Paula Yates. I was enthralled by Paula way back when and collected her books in the 1990s. 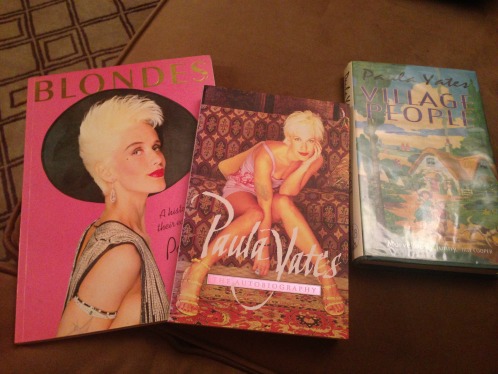 Paula was passionate about motherhood and wrote child-oriented books including The Fun Don’t Stop: Loads of Rip-roaring Activities for You and Your Toddler. In her adult books, she still had a wonderful, funny, tolerant way of writing about children. From Paula’s 1995 autobiography: 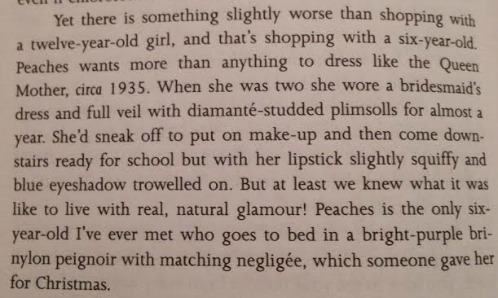 All of the obituaries for Peaches repeat, naturally, how the early years of happiness came to an end when Paula left Bob for INXS singer Michael Hutchence; how Yates and Hutchence had a bitter custody battle with Bob over Peaches and her sisters Fifi Trixibelle and Pixie; how Paula and Hutchence had a daughter, Heavenly Hiraani Tiger Lily, in 1996, and how Hutchence was found hanged the next year; and how a devastated Yates followed him to the grave due to a heroin overdose three years later at the age of 41. 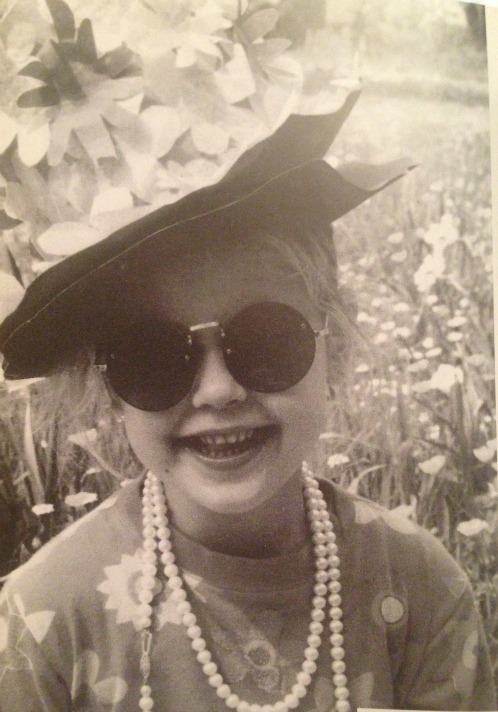 A photo of a young Peaches from Paula’s autobiography.

There was another tragic element of Paula’s life that hasn’t been touched upon in this first round of stories: the unhappy, unsettled childhood that may have pushed her down her sad path. Her mother was rarely around and her presumed father, Jess Yates, the presenter of a religious television program, left when Paula was eight. Shortly after Hutchence’s death, Paula was made yet more miserable by the public confirmation that yet another television presenter, the then-deceased Hughie Green, was her real father. (Green’s other daughter described her father as “a monster.”)

Like her mother, Peaches suffered from a chaotic childhood. She was 11 when Paula died and, in a 2012 interview, said she was so numb after that she didn’t start mourning until she was 16. After that were years of drinking, drugs, naked photos, a quickie marriage — the usual scandals for a child of celebrities — though Peaches also wrote for newspapers and magazines and followed her mother and grandfather(s) onto TV. More recently, she married musician Thomas Cohen at the church where her parents were married and her mother’s funeral was held. Her Instagram feed portrayed a doting mother to delightfully chubby sons Astala Dylan Willow, who will turn two this month, and Phaedra Bloom Forever, who is about to turn one (I can’t get over this butterball). Once again following in her mother’s footsteps, Peaches was starting a column on motherhood for Mother & Baby magazine. In a recent interview with the magazine, she said:

“After years of struggling to know myself, feeling lost at sea, rudderless and troubled, having babies through which to correct the multiple mistakes of my own traumatic childhood was beyond healing.

“I felt finally anchored in place, with lives that literally depend on me, and I am not about to let them down, not for anyone or anything.”

It seemed lately that Peaches was going to be a survivor like Kurt Cobain’s daughter Frances Bean, who wisely had herself removed from the custody of her mother, Courtney Love, in order to lead a less erratic life with her late father’s mother and sister.  I’m sad it wasn’t to be.

The cause of Peaches’ death hasn’t been determined yet. Her father released a heartbreaking statement signed by the family:

Peaches has died. We are beyond pain. She was the wildest, funniest, cleverest, wittiest and the most bonkers of all of us.

Writing “was” destroys me afresh. What a beautiful child. How is this possible that we will not see her again? How is that bearable? We loved her and will cherish her forever. How sad that sentence is.

Tom and her sons Astala and Phaedra will always belong in our family, fractured so often, but never broken.

One of the last photos Peaches posted to Instagram showed her as a child in Paula’s arms. 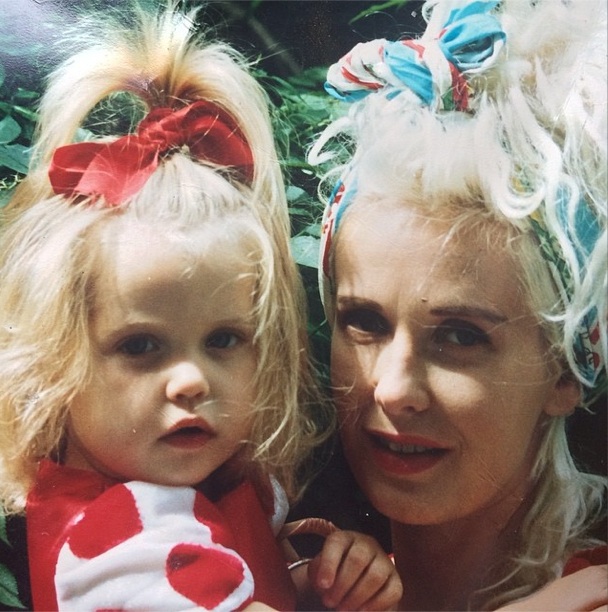 She captioned it, simply, “Me and my mum.”

UPDATED TO ADD: Because Peaches’ Instagram has been removed, at least for now, here is the butterball photo of her son with which I was so taken. 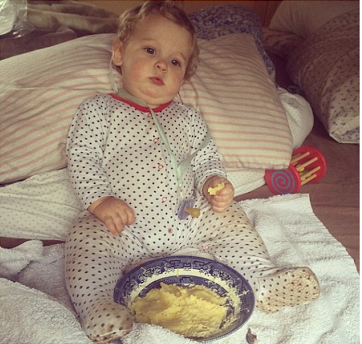 She captioned this, “Eating my dinner in bed is such hard work, mama.”

You might also like
More Ass Jewelry! Plus Anne Hathaway and a Sale.
My Best Dressed at the 2019 Met Gala Is ...
Mariah Carey's Push Present: Twin Nameplate Necklace
Previous Post: « From Gloria Steinem to Miley Cyrus in One Day
Next Post: This Week’s Posts »