Marc Jacobs will show his Fall 2014 collection tonight at 8 PM at his usual venue: the armory at 68 Lexington Avenue. I wasn’t invited, but I did go to Marc’s shows for several years, thanks to MrB’s job. I think the last one we went to was in September 2007. That show was memorable because it started two hours late and because I photographed Anna Wintour smiling (slightly).

The show in February 2006 was also special because New York Times street-style photographer Bill Cunningham took a picture of me in a vintage Ossie Clark dress, and I actually made it into the paper!

I’m on the bottom row, to the right of the big photo. Click to enlarge.

I wore Ossie to quite a few Marc Jacobs shows and Bill Cunningham always recognized them and photographed them, but that was the only Ossie that made it to print. (As I said recently, Bill knows his 20th-century designers.) For the Spring 2005 show in February of that year, I wore this Ossie. 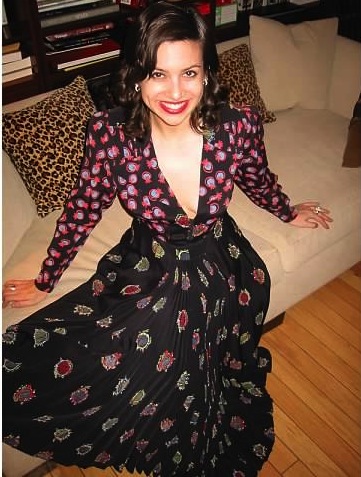 For the September 2005 show, I wore this Ossie. 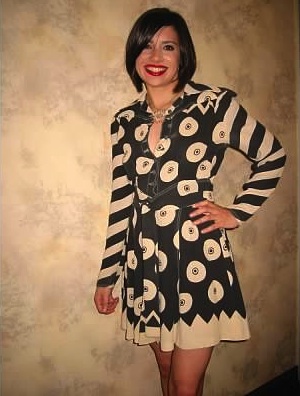 In February 2004, I was much more casual. I wore a black top, probably with jeans, and a leopard-print fedora that stood out as I lurked behind front-row celebrities including Melania Knauss (now Melania Trump) … 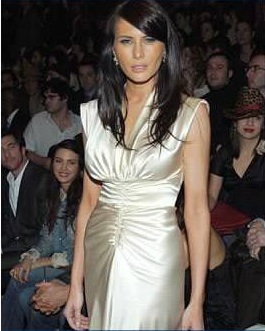 I’m on the right, with the hat and red lipstick! 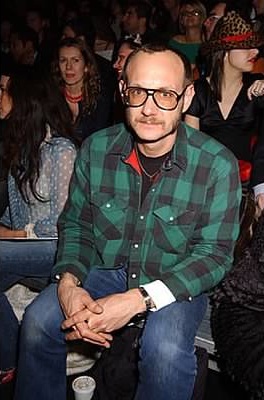 … and model Helena Christensen (sitting next to Richardson). 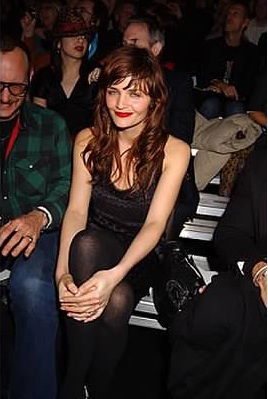 But my favorite photo is this second shot of Melania, where you can most clearly see me leaning on MrB’s shoulder, exactly as described by the New York Observer after an interview with MrB. 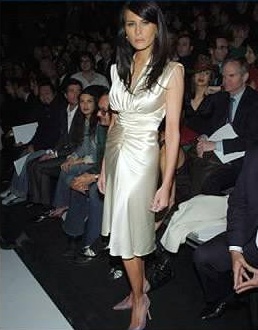 “Paul Steiger is not a metrosexual.

‘The only thing I have to decide is whether it’s going to be blue or gray,’ said The Wall Street Journal ‘s managing editor, when asked about his closet’s morning offerings.

But Mr. Steiger — sitting with his wife, Wendy Brandes — is not completely out of the loop. Speaking to Off the Record special Fashion Week correspondent Noelle Hancock on the evening of Feb. 9, at the Marc Jacobs show at the Armory at 68th Street and Lexington Avenue, Mr. Steiger said that he could appreciate the duds, even without an innate fashion sense of his own.

‘He’s hot!’ Mr. Steiger said of Mr. Jacobs. ‘We had a big Page One story about him and the tensions within LVMH, and that makes him a good story. And his fashion is always interesting.

‘I consider myself someone who has a wife who’s a woman of style,’ Mr. Steiger added, as Ms. Brandes — who was sporting a leopard-print cowboy hat — nodded and laughed, her arm casually draped across her husband’s shoulders. ‘She can dress me up or she can’t take me out,’ Mr. Steiger concluded.”

The story had my hat style wrong and an incorrect address for the venue which was, as I said above, 68 Lexington, not 68th Street and Lexington. But it got my posture right. And I seem to recall MrB’s remarks too. One thing I don’t remember is who took the photos. A friend sent them to me 10 years ago, and I don’t know if the source, so if they’re yours, let me know and I’ll give you a credit and a link. Meanwhile, a big change from 2004 is Marc’s relationship with LVMH, the parent company of Louis Vuitton. On the day of the show in February 2004, Teri Agins of the Wall Street Journal reported (in part):

“Seven years ago Marc Jacobs was struggling to keep his fashion house afloat. Despite critical acclaim, the New York designer was so strapped for cash that he had to moonlight as a consultant to other designers. His business partner, Robert Duffy, refinanced his country house twice. Then Bernard Arnault, chairman of LVMH Moet Hennessey Louis Vuitton, dangled an irresistible offer: If Mr. Jacobs would lend his creative flair to the venerable but stodgy Louis Vuitton label, LVMH would underwrite his beleaguered design firm.

Since then, the partnership has been one of high fashion’s great success stories. Mr. Jacobs’s designs have helped boost sales and buzz around the $3.5 billion Louis Vuitton brand, which accounts for 60% of LVMH’s operating profits. Last year, his multicolored Murakami handbag turned into a $300 million hit. At the same time, the 40-year-old designer has developed his own Marc Jacobs label, which rang up more than $75 million in sales last year.

But tensions are erupting inside this partnership. Messrs. Jacobs and Duffy think their ambitions to develop the Marc Jacobs brand are being stymied by their French partner. As they prepare for Mr. Jacobs’s fall runway show Monday night and the opening of a new Louis Vuitton flagship store on Fifth Avenue on Tuesday, Messrs. Jacobs and Duffy complain that LVMH hasn’t invested enough in the Marc Jacobs business and has locked them out of critical decisions about the operation.”

By May 2004, everything was settled, as the Journal updated:

Time sure flies! The 10-year contracts are up. Last fall, Marc did his final show for Louis Vuitton, and Louis Vuitton announced that Marc would be focusing on his own label and preparing it for an initial public offering. Marc has said that his own brand needs a makeover as it goes into its next phase. He recently told W magazine:

“‘I’m thinking about everything. I’m thinking we need to redesign the logo, the packaging. What about the shopping bags? The store interiors?’  One of his primary objectives is to build up the shoe line, which has never been particularly strong, as well as to revive the handbag business (long a financial cornerstone of the company), which has lost some of its sheen in recent years. ‘I was letting the design team do the bags, and, unfortunately, without my involvement, you get a lot of merchandisers telling the design team what to do,’ Jacobs said. ‘It got very polluted and diluted and lost its identity, and I think that’s the same with the shoes. Not to blame anybody, but things slipped, and the only one who can change that is me.'”

I love what he says about the merchandisers there. Retail folks love to tell designers how to design. Then they wonder why things don’t seem inspired. Creativity — whether in fashion, movies, television, art, jewelry, fiction, dance, theater or any other category — works better without committees and focus groups.

Tonight’s show should be a good indication of at least some of the changes Marc is planning. And, even though Marc has tormented me with his greased-up nudity over the years, I’ve got to give big props to him and Robert Duffy for managing the LVMH relationship so well for so long.  Sixteen years of work for a big-ass, deep-pocketed company led to Marc and Robert getting exactly what they wanted, despite the ups and downs along the way. More proof that persistence pays off!

UPDATED TO CLARIFY: LVMH still has a majority stake in Marc Jacobs, so his business with the parent company continues, even though he’s not designing for Louis Vuitton anymore.