Did you watch last night’s The Beatles: The Night That Changed America – A Grammy Salute, the 50th-anniversary celebration of the Beatles’ performance on the Ed Sullivan show? I loved it … except for the appearances of Maroon 5 and assorted, random-seeming actors. I’m wondering if Johnny Depp, Sean Penn and Kate Beckinsale are close personal friends of Paul McCartney and Ringo Starr, because otherwise I don’t know WTF they were doing there. (Comedian Eric Idle made sense, because of his Beatles parody band, the Rutles.) I would have preferred to see people who had more connection to the band, or at least other musicians doing the introductions.

Also, I would have been happy to see more Ed Sullivan footage and more interviews with the 60-somethings who were screaming teens in the Ed Sullivan theater in 1964. Those ladies were fabulous! There were pictures of them in the audience back in the day and clips of them now, talking about the experience. They were STILL so psyched! It was also fun to hear from the people who worked behind the scenes on the Sullivan show, especially the guy who stood in during rehearsals for an ailing George.

The standout tribute performances included (but are not limited to!) John Mayer and Keith Urban doing “Don’t Let Me Down”; reunited Eurythmics and “Fool on the Hill“; Alicia Keys and John Legend on piano for “Let It Be“; and Stevie Wonder funkifying “We Can Work It Out.” It was great to see George Harrison’s lookalike son Dhani performing his dad’s song “Something” with Jeff Lynne and Joe Walsh. And, of course, Paul and Ringo performed separately, then together, with Yoko Ono grooving in the audience like she did at the Grammys last month. (All the Beatles wives were there and looking good: Nancy Shevell (Paul); Barbara Bach (Ringo); and fierce Olivia Harrison.) 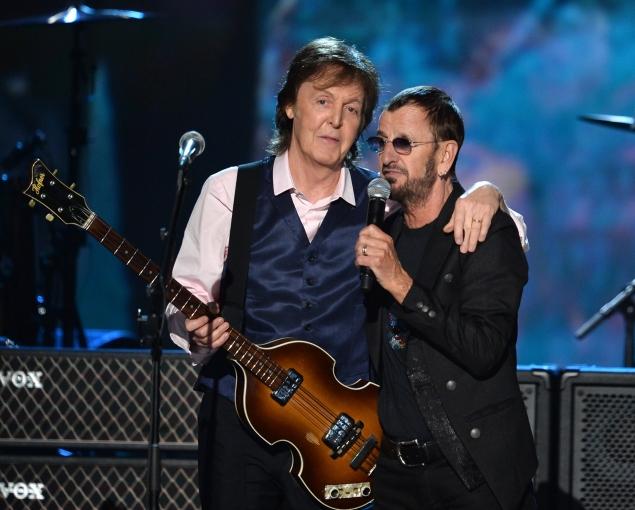 I’ve written about the Beatles a lot because I’ve loved them since I was 13. In fact, I almost married Paul McCartney. Admittedly, we’ve never met, but he’s still my almost-husband whether or not he wants to be. (Learn why here.) Paul sounded fantastic last night, which makes me say “HA!” to the blue meanies who blather on teh Interweb about how he should retire whenever he has an off night. Here’s what I’ve said about that shit in 2012 and 2013. 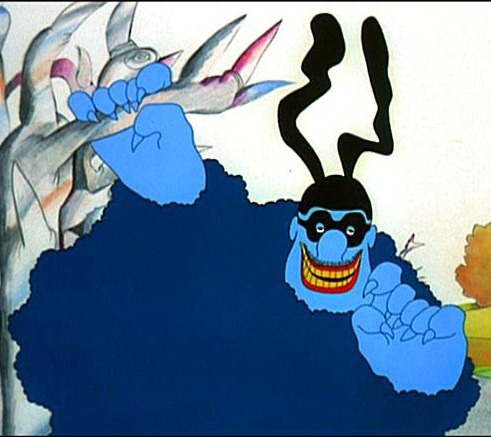 He will never retire, Meanie! NEVER! (Screenshot from the Beatles’ Yellow Submarine movie.)

You can find all of my McCartney posts here.

While Ringo has never ascended to the level of almost-husband for me, I still have strong feelings for him. In high school, I even had a shih tzu named Ringo, but that dog was a terror, so don’t mention this to the real Ringo. Last month, I proved that the real Ringo runs the world, and it’s dangerous to anger such a powerful man with bad dog stories. Instead,  I recommend you get tickets to see him when he goes on tour with his All-Starr band in June and July. I’ve enjoyed those shows in the past.

I also encourage you to get Tune In, the new Beatles book by Mark Lewisohn, which I mentioned in the recent Ringo post. I’ve read over a dozen Beatles books — that’s not counting books focusing on one band member — and Tune In is the most thorough by far, while still being an easy and entertaining read. When I was a teenager I read Philip Norman’s Shout! over and over again, as well as Cynthia Lennon’s A Twist of Lennon. I was hoping to find my original editions of those as I rummaged through my old possessions in my childhood home last year. So far, no luck. But at least I found this early ’80s autograph book. The B. Kliban cartoon cats were on everything back then. 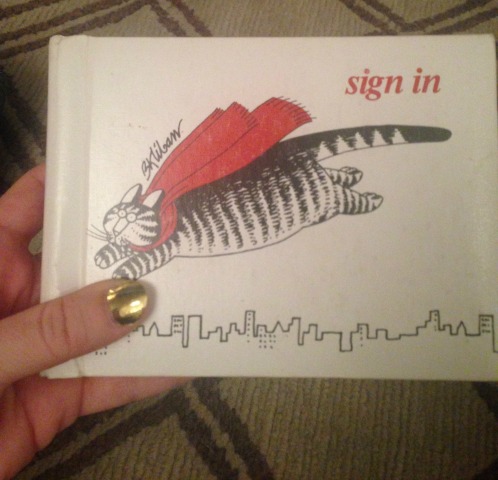 This book contains an autograph from a member of another important British Invasion band — Roger Daltrey of the Who. 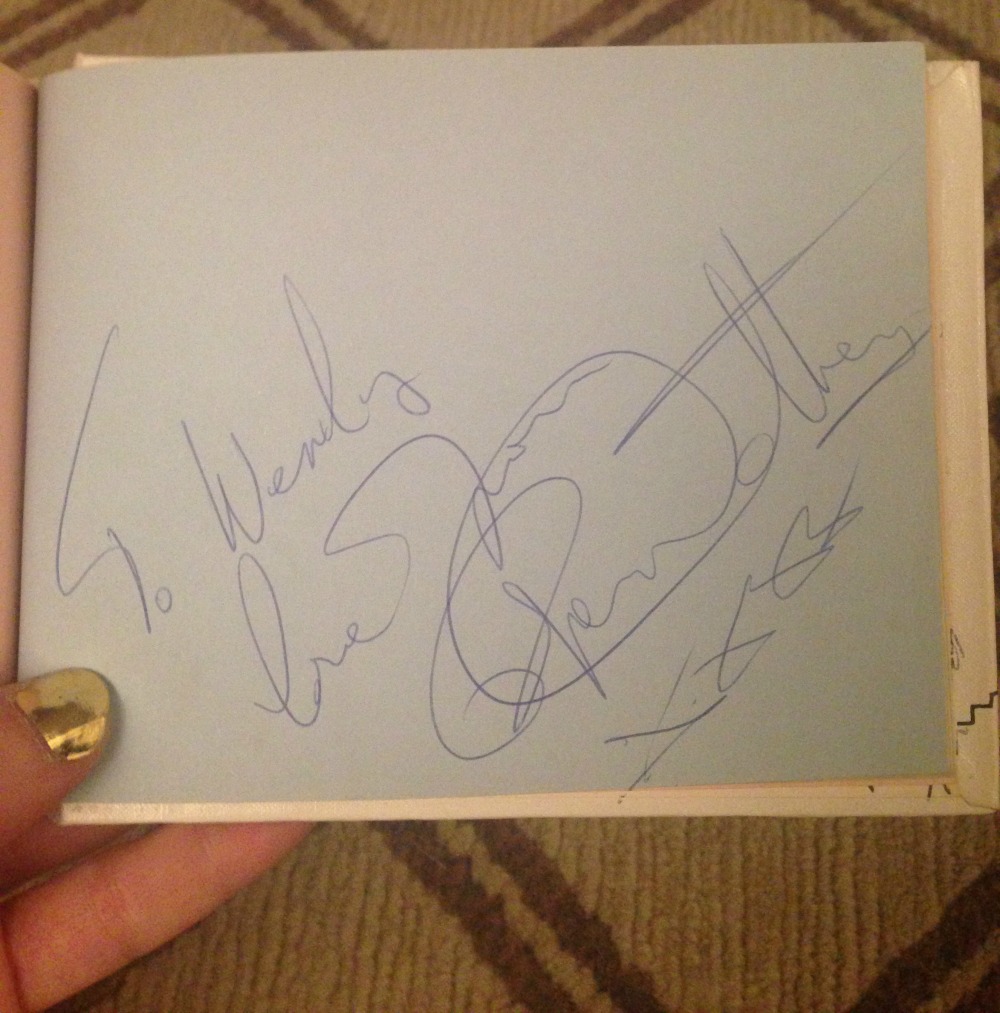 I’m still looking for the photo of me and a high-school classmate standing shyly by Roger while he signed our books. We encountered him in the spring or summer of 1983, when a bunch of us participated in a month-long exchange program with students in Hailsham, England. It wasn’t a proper exchange because the Hailsham kids stayed with us earlier in the year, and then we went to visit them. No families actually swapped kids at the same time, but that was nice for us, because the students got to know each other. One of my American classmates loved Roger like I loved Paul, and, if I recall correctly,  my host-family dad (who had already driven me past some Beatles-related driveway) was like, “Hmmm … I know a place where Roger Daltrey goes fishing.” We went so my classmate could look at the lake where Roger fished. That was spectacular enough, back then, just to look at Roger’s lake. But, lo and behold … Roger was there in the flesh! My normally extroverted classmate was so overwhelmed that she could hardly make a sound. I was normally shy, but managed to step into the breach and request the autographs and photo despite being dazzled by Roger’s blue eyes. Very belated thanks, Roger, for being nice to two 13-year-olds when you were trying to relax.

Thinking about my classmate’s cat-got-your-tongue moment reminds me how terrible it is to miss a once-in-a-lifetime moment. That realization helped me work up the courage to speak to Anna Wintour in a Vogue elevator in 2012, so I feel like I’ve warmed up enough to do the right thing if I meet my almost-husband Paul McCartney. The right thing wouldn’t be saying, “Hi, I’m a big fan” or asking for a quick photo or autograph. The right thing would be to throw him down and drag him off to my lair. Obviously! But don’t worry, actual McCartney wife Nancy Shevell! I will return Sir Paul to you right after he sings his entire repertoire in my living room while I take 30,000 pictures and weeks worth of video. That’s not asking too much, is it? I wouldn’t want to impose.

UPDATED TO ADD: I found this fantastic quote in the New York Times. 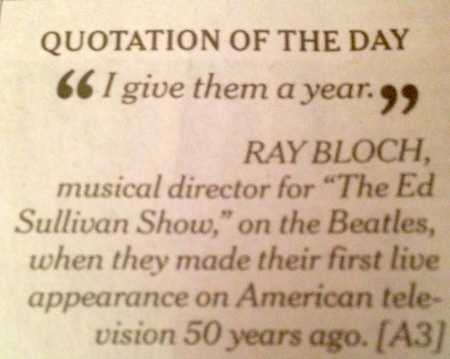 I like to collect quotes/anecdotes like this. I know a lot of people who will compare themselves to the most successful folks in their industry and feel hopeless because they think they’ll never reach those heights. I like to remind everyone (and myself) that nothing is preordained, and things only look inevitable with 20/20 hindsight.  The “good luck” often goes to those who simply don’t give up.  By the way, if you don’t know the story about the Beatles’ 1962 rejection by record label Decca, here it is. The label signed Brian Poole and the Tremeloes instead. We all know who won in the end.

You might also like
Happy 75th to My Almost-Husband, Paul McCartney
From Gloria Steinem to Miley Cyrus in One Day
What Wendy Wore: Rock and Roll Hall of Fame Induction
Previous Post: « The Week in Review
Next Post: Last Day for Guaranteed Valentine’s Delivery Outside New York! »