I’m going to be drowning my sorrows in Champagne tonight because it is, indeed, my birthday. As I’ve previously noted, I don’t think birthdays are that much fun anymore, even though they’re better than the alternative.  I was much more thrilled by them when this photo was taken … on Dec. 23, 1984, when I turned 17. 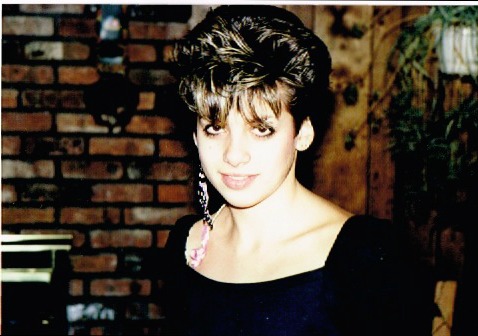 I dressed in style to celebrate the big day. My hair was teased, my trademark Liza-worthy eyeliner was in place, and a single beaded earring was worn. Under the earring, you can see a rare shot of the blonde, braided “tail” that I sported for a couple of years. It looks like I adorned it with a lavender ribbon to match the earring. Interestingly, for years I assumed that my hair had been inspired by Aimee Mann’s even-more awesome braided tail in ‘Til Tuesday’s “Voices Carry” video, but now that I look it up, it turns out that video wasn’t released until 1985.

Memory is a tricky thing, isn’t it? That’s why I won’t swear that the dress was from Fiorucci, even though I think it might have been.

According to the sometimes reliable Wikipedia and other websites, the song “Voices Carry” was originally addressed to a woman, but studio executives thought it would be more appealing if it was about an abusive boyfriend. Yep, that’s always more palatable. Anyway, I like Aimee Mann. Last year, she did a funny shot-for-shot remake of “Voices Carry” for her song “Labrador.” Check that out here. Guess which wig she puts on instead of the black bob of the original video? I also came across a 2001 interview she did with the Washington Post in which she spoke about her willingness to take on the music industry. She said:

“I think I’m one of the few people fed up enough to start talking about the industry in really honest terms. Which is pretty dangerous. It is really dangerous.

This is how she sees it: If you’re rich and famous, like, say, George Michael, and you complain about the industry, then it’s like, ‘Oh, stop whining, you big rock star.’ As if that’s a really big perk. And if you’re small, independent and you rail against the industry, then you’re labeled a sore loser. Sour grapes. ‘No one liked your record. Get over it.'”

Oh, and in case you’re having trouble with the math, I’m 46.