On the weekends, I spend a lot of time reading old-fashioned paper copies of the New York Times and Wall Street Journal. I still enjoy newsprint because being forced to flip pages leads me to things I’d never see if I were clicking only what was of obvious interest to me on a website. Yesterday, I was struck by a reader’s response to the New York Times Magazine’s previous week’s story about whether champion tennis player Roger Federer is still a contender. The “Letters to the Editor” page in the magazine now includes website comments, of which this is one. Because I avoid reading comments on news sites, I would never have seen it in its original form. 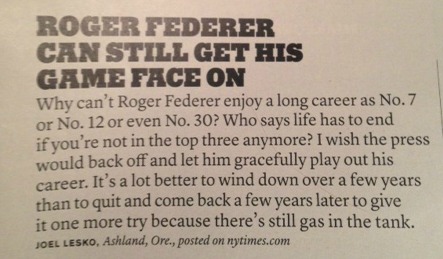 I like that. So many people think something is a failure if it’s not going up, up, up — whether it’s a company revenues, a performer’s record sales, or an author’s production of “classics.”  But there’s a saying that MrB likes to quote: “Trees don’t grow to the sky.” The upward trajectory can’t continue infinitely. At some point, everything peaks and then either settles at a plateau or goes down. Is it really so terrible to be very good, good or even okay instead of great? Nothing erases the accomplishments that came before. I get particularly annoyed by folks saying that my almost-husband Paul McCartney should retire because once in a while — in the midst of his many still-great performances — he has an off night. “It’s destroying his legacy,” they claim. How? How does the fact that you don’t like his hair dye or “Hey Jude” change the enormous musical and cultural impact of Beatlemania, the Ed Sullivan Show, Shea Stadium, The White Album, or anything else? I read people making similar comments about Bob Dylan, who tours relentlessly. People have been complaining about his voice for years, but no one besides a professional, paid critic HAS to go see him live (and the critics go for free). Everyone has Poodle and can see what others have said about the performances before buying their concert tickets. I’m not even a Dylan fan and I know what the consensus is on his shows. So I feel that if Dylan enjoys himself and audiences still want to see him, why not? I don’t think it’s so sad that he’s not the same guy he was when The Freewheelin’ Bob Dylan came out — that was 50 years ago. Life moves on; maybe he’s interesting in different ways now. (You never know what might happen. Artist Henri Matisse started his stunning paper cutouts in his 70s, after a brush with death.) When Dylan starts to hate that new version of life, then he can quit. Federer can do the same.

My ex-Beatle almost-husband definitely isn’t hating that life. In July, Rolling Stone wrote, “Anyone who’s seen Paul McCartney on this year’s Out There! world tour can tell you how much he loves being onstage.” A month earlier, his show at Barclays Center in Brooklyn (I missed it — let us never speak of this tragedy again) got a rave review from the same magazine, ending with, “… McCartney clearly lives for this. Crazy as it sounds, he very well might pull a Chuck Berry and still be at this late into his eighties. Why the hell not?” And the September 13 issue of Entertainment Weekly has this positive review of Paul’s new song, “New”:

So Paul is happy and his fans are happy — and haters are gonna hate but they’re not gonna be as happy as us. So there! 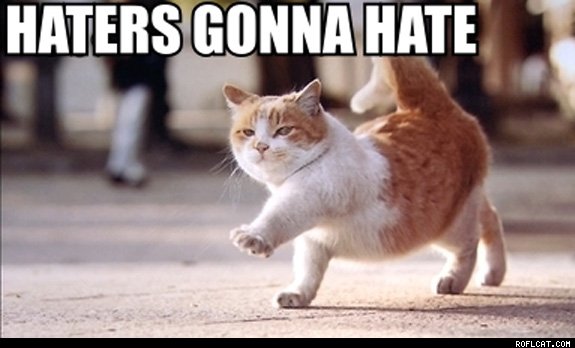 I’ve always wanted to use this picture.

Last weekend, I didn’t spend as much time with the newspaper as usual. I was reading 1950s articles on Elvis, 1980s articles on Madonna, and Y2K articles on Britney Spears for a Huffington Post story about the effects of nostalgia on memory. All of this was inspired by Miley Cyrus’s MTV Video Music Awards performance.

I found so many great things about now-iconic musicians who weren’t as appreciated back in the day.  There was more than I could fit in the Huffington Post story, so I wrote another post here. If you like the Rolling Stones, you need to see the video I included.

Anytime you’re upset by how any particular aspect of life today is so much worse than “the good old days” — whether or not twerking is involved — you might find some consolation in history. As author Barbara Tuchman pointed out, history provides important perspective on current events.

And here’s what else was on the blog this week:

You might also like
The Weeks in Review
The Week in Review, Birth-Year Necklaces, Birthday Shout-Outs
The Fightin' Walrus
Previous Post: « Rumors of Unsupervised Cat Exercise
Next Post: What Wendy Wore: Depeche Mode and a False Memory »