Kanye West has irritated me many times with his asshattery, but every so often, his fashion experimentation places him firmly on my good side. Back in November 2011, I approved wholeheartedly when I saw Kanye wearing a Givenchy leather kilt over pants during his and Jay-Z’s “Watch the Throne” concert at Madison Square Garden. 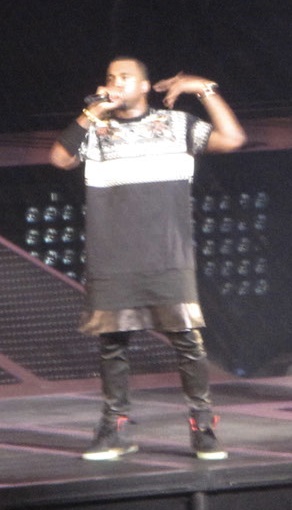 My own blurry picture of Kanye from November 2011.

At the time, I wrote, “I love it. It’s such a ‘fuck you’ to machismo.” Kanye’s clothing choice got a lot of coverage during that tour, so I was surprised when people freaked out all over again when he wore the kilt for the 12/12/12 Concert for Sandy Relief. Damn! Why does anyone worry about being seen in the same outfit twice when the public obviously has the attention span of a fruit fly when it comes to major fashion statements?

Today, Kanye has everyone’s panties in a twist because he took a page from Lady Gaga’s Book O’ Celebrity Style and donned a mask at his Atlantic City show last night. 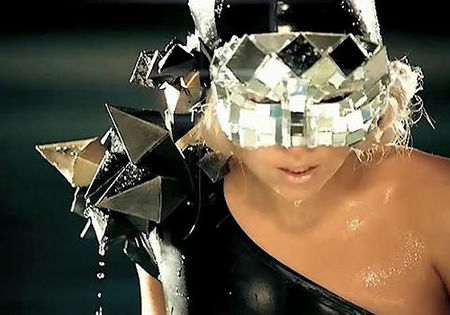 Lady Gaga’s “Poker Face” mask made me fall in love with her. Click for my 2009 Gaga post.

Actually, he wore two masks: a crystal-studded one, reportedly by Maison Martin Margiela (very fashion-forward!), and a feathered one.

I’m impressed. It’s brave for a man to push the sartorial envelope in music these days, especially in hip-hop. Even Usher, a singer, caught hell for wearing relatively tame neon sneakers earlier this year. Meanwhile, as I pointed out in my post on Usher, past generations of musical men happily wore makeup, hair-dye, and harlequin-patterned jumpsuits. And it was fun! “I always love a man who is not afraid of feathers,” declared one of my favorite over-the-top dressers, Duran Duran’s Nick Rhodes in a 2011 Wall Street Journal interview that described him as having a “… decades-long love affair with steroidal-shouldered jackets, tie-dye headdresses and black eyeliner …” Now men get mocked for being weak when they dress theatrically, but they should be celebrated for being strong. I say challenging traditional notions of masculinity is totally badass, and any guy who does is actually tougher than the ones spitting about drugs, guns and women. Promoting a drug-dealer past when you were really a prison guard? That’s old. Publicly defying the uptight expectations of the masses? Fresh! Nice job, Kanye.

Speaking of hip-hop stars who dare to be different, the New York Times Magazine “The Lives They Lived” issue is out with Adam Yauch, aka MCA, from the Beastie Boys on the cover. I might have to save this issue, like I did with Rolling Stone’s cover story tribute to Yauch, who died this May at age 47. I’m constantly fascinated by the story of Yauch’s personal evolution. I especially like this part of the article by Alex Pappademas:

“Of all the things the Beastie Boys rendered cool by association — ’70s cop-show mustaches, outlandish golf attire, throwing eggs at people — the idea that you could change, that in order to be cool you had to change, was the most important. The fact that they’d been unrepentant knuckleheads made their transformation into repentant knuckleheads seem heroic.”

Adam Yauch is a great reminder that one’s past (even a really fun past) doesn’t have to define one’s future.

You might also like
Best Use of a Previously Worn Wedding Dress
My Best Dressed at the 2016 Tony Awards Is ....
Who Wendy Saw: Coachella 2017
Previous Post: « What Wendy Wore in 2012
Next Post: Kanye West, Azealia Banks & a New Year’s Resolution »