Watching the Grammys red carpet — with my eyes peeled for Snooki, whose stylist borrowed my swear rings — I was reminded that I went to the Grammys in 2003, when they were held at Madison Square Garden. I wore a very tight unlabeled vintage dress that might have been by Giorgio di Sant’ Angelo. Or not. 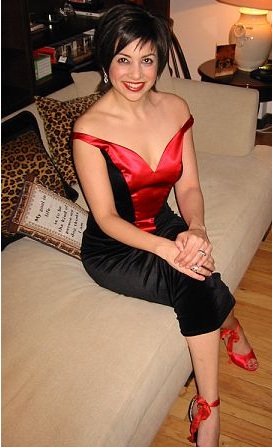 At home before the show.

The shoes are ones my mother gave me. She bought them in Las Vegas in the ’80s and only wore them once after someone teased her about the rhinestones on the heels.  I still have the shoes. I still have the dress too, but I got it dry-cleaned at some craptacular place and it came back even tighter than it was. I’ve been scared to try it on.

Naturally, I still have the t-shirt I got that night. 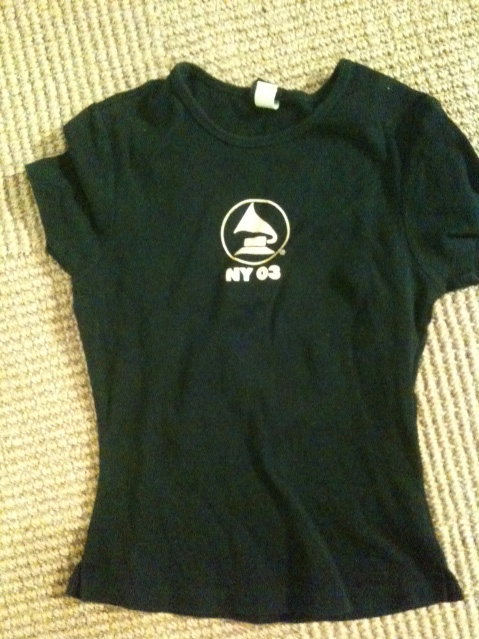 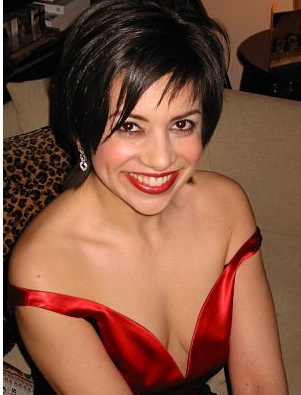 My eye makeup was a little drag-queeny, but I like it. Speaking of dressing in drag, or at least not like oneself, I was intrigued to see a red-hooded Lady Gaga hit the red carpet tonight with a fellow dressed like the Pope. Then I was horrified to see that Gaga was wearing blackface. Finally, I realized it was not a too-tan Gaga but Nicki Minaj. What a relief! While I adore Nicki, I think this is a sign she should go in a different style direction. Passing for Lady Gaga in racist makeup is not the look.

Anyway, back to 2003 — that was the year that Norah Jones swept the Grammys, snagging five awards. I’ve got nothing against Norah Jones. I enjoyed her when I saw her perform at Cyndi Lauper’s benefit concert at the Beacon Theatre in December. Beautiful voice. But in 2003, her Come Away With Me took Album of the Year over Home by the Dixie Chicks;  The Eminem Show by Eminem;  Nellyville by Nelly; and The Rising by Bruce Springsteen. Give me a break, y’all!