People have responded to the disaster in Japan in myriad ways via social media, just as they have in real life. Some have tweeted and blogged about it, some haven’t. Some people care passionately about what’s happening in the world, some continue to be entirely engrossed in their own lives.

Several fashion bloggers, including the gorgeous and very eloquent Citizen Rosebud, have been disappointed that their fellow bloggers haven’t focused more on the topic. I understand that. It’s shocking to be deeply affected by a disaster yet see that life goes on for the majority of people. At some point, all of us will feel that shock on a personal level. No one is immune to a terrible medical diagnosis, death, divorce, or the myriad other life-shattering events that make us feel that nothing should never be the same. Our shock can turn into rage as we rail against our own helplessness and the world’s perceived indifference. I remember going to Atlanta not long after 9/11 and being stunned that no one was talking about the World Trade Center all day. I’m sure many people in Atlanta talked about it plenty, sat glued to the TV and made donations, but by the time I got there, people seemed to be going about their business.  Later, I thought, what else would they be doing? Exactly what behavior would help at that point?

I’m not sure fashion bloggers are a more superficial group than any other or that they have been more negligent in their responses to current events. ESPN continues to broadcast sports, rather than earthquake coverage, (At the same time, sports organizations such as Major League Baseball are raising money for relief efforts.) I went to a basketball game last night and there was no moment of silence and no reference to Japan or any of the many other crises going on in the world. The fans were happily cheering their team and booing the opposition, while eating hot dogs and drinking beer. Were they oblivious to reality or just taking a well-deserved break? I can’t say.

I’ve written before that human nature has stayed depressingly the same for millennia; it’s society that changes. We’ll always have the equivalent of the four sons in the Passover Haggadah: the wise, the wicked, the simple and the one who doesn’t even know how to ask a question. We can’t always tell one from the other based on externals such as physical appearance, television viewing habits, event attendance, overheard conversations or social media use. I’m not going to judge anyone based on whether or not he or she feels capable of addressing the Japanese situation on his or her fashion blog .. or sports or book or reality-television blog. But I do have a little something for “the one who doesn’t even know how to ask a question,” or, in this case, the fashion blogger who is affected but at a loss about how to react appropriately. You don’t have to say a word. Just donate what you can to the aid effort yourself, then display this graphic that my gorgeous friend ENC was kind enough to make for us. 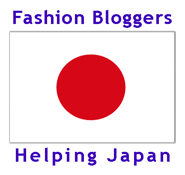 Click on that and it will take you to a page I created with links to charity and news sources, but you are welcome to change the link to go to your own informative page, to another source’s similar content, or directly to your favorite charity — whatever works for you.  If you care, yet words fail you, use this image to show your solidarity with the people of Japan and encourage others to get involved in whatever way they can.

UPDATED TO ADD: Just to play devil’s advocate with myself, another option is to do … nothing, right now. The New York Times has a good story on how little direction charities have at this point. Saundra Schimmelpfennig, a former international aid worker who writes the excellent blog Good Intentions Are Not Enough, which I’ve mentioned before, says of Japan: “They are working almost exclusively with other governments, not with international charities,” she said. As Schimmelpfennig wrote in her post The DOs and DON’Ts of Disaster Donations,  you might consider holding off on any donations till later in the rebuilding process. She says, “Rebuilding after a disaster takes years, waiting a few weeks or months before donating everything you plan to give will allow you to make additional funding decisions once the situation on the ground is clearer.”

If you can’t bear to wait, do what gorgeous blogger Jennine did:

“I donated to the Red Cross, but checked the ‘where funds are most needed’ box … So maybe the money went to Japan, but it seems like there is money needed in a lot of places, not just where the headlines are. I used to work with ARC [American Red Cross] disaster relief, so I think it’ll go where it needs to go.”

And here’s another suggestion via gorgeous blogger Jessica of The Entertaining House. Lydia of Ever Ours and the ladies of Utterly Engaged set up For Japan With Love to collect donations for ShelterBox, which happens to be one of the charities on my list. (The first ShelterBoxes to arrive in Japan are scheduled to be heading out to those in need today.) They are also calling for a bloggers’ day of silence tomorrow. Click the graphic for more information. 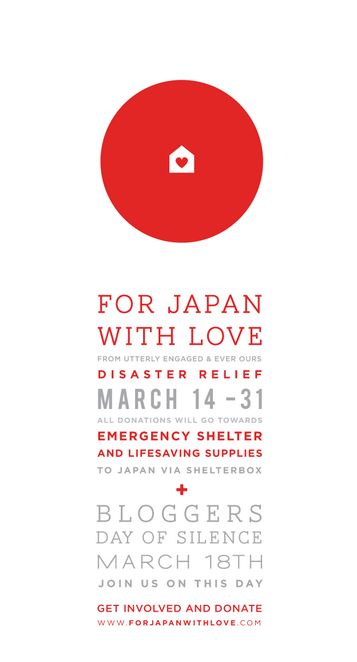 You might also like
Going Dotty for Yayoi Kusama
The New York Times Is a Movie Star and Other Journalism Stuff
Nuclear Weapons: Always Immoral, Now Illegal
Previous Post: « Mariel’s Engagement Ring Reminds Me of ABBA
Next Post: I’m in a Rush Today »