I overcame last week’s moment of doubt and wore my vintage Patrick Kelly leopard print gown to Vanity Fair’s Oscar Party last night. Not only was I glad to wear the dress again — I feel like I’m not done with it! I want to wear yet again soon. I’m obsessed with this dress. Next thing you know, I’ll be walking the dogs and going to the supermarket in it. Maybe then I’ll finally get a good picture of myself in it. Last night, amateur photographer MrB struggled with harsh lighting. I need to start a TV show like Wife Swap, but for fashion bloggers. It would be called “Significant Other Who Follows You Around With a Camera All Fucking Day Swap” and I would get to borrow one of those boyfriends/fiances who live to take professional-quality photos. 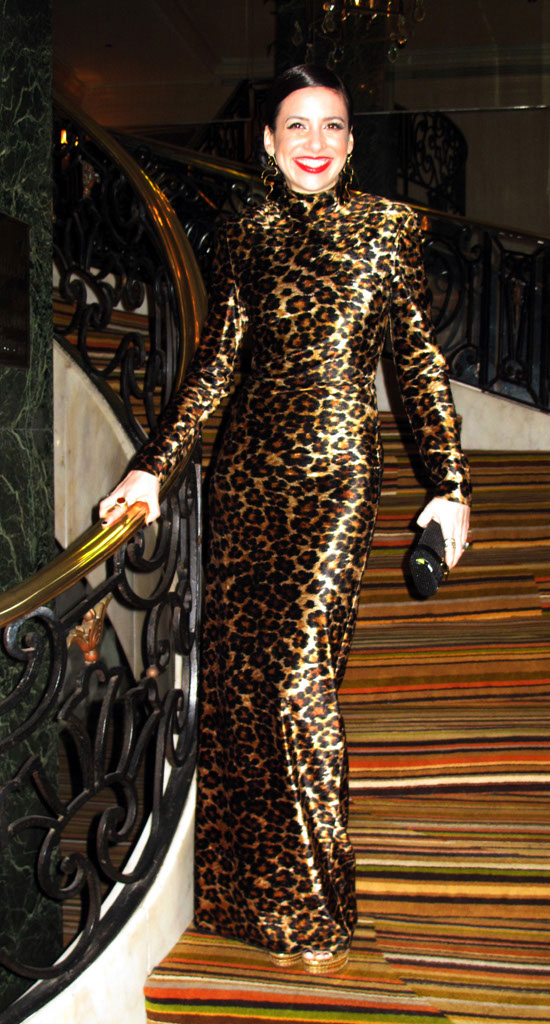 I couldn’t get a good shot of my hair but it was an off-to-the-side chignon just like here.

Before the party, we stopped at the Four Seasons Hotel for a drink, and the dress earned four compliments in ten minutes, which made me happy on behalf of the late Patrick Kelly. Patrick died on New Year’s Day, 1990, five years before the launch of eBay, which was where I found this dress in 2008. Who would have imagined back in 1990 that people would be admiring his dress 21 years later! (There’s a shorter version in the same fabric on eBay right now. If you bid, don’t forget to snipe!)

We had a great time at the Vanity Fair party, where the first person we laid eyes on was Madonna. Totally missed Justin Bieber so I didn’t get to tell him that he’s the same age as my beloved Lagerfeld shoes. I was amused to see that young Hailee Steinfeld of True Grit had changed out of her heels and into red Chuck Taylors, which worked well with her Marchesa dress. I told Adrien Brody that I was still traumatized by his genetic-experiment-gone-awry movie Splice, and he said, “Not as much as I am.” I chirped, “Best speech of the night!” at adorable Luke Matheny, who won for best live-action short. As I walked away, feeling like I said something original, a man rushed up to Luke and said, “Best speech of the night!” He probably heard that 100 times. Later, as I chatted with my gorgeous friend Jane, new fathers Elton John and David Furnish drifted ever closer, till Jane was back-to-back with Elton. If she’d been any closer, she would have been under his jacket.

We also spotted Colin Firth; Billy Crystal; Reese Witherspoon; Mark Ruffalo and his wife Sunrise (I introduced myself to her because my jewelry used to be sold at a store called Kaviar and Kind, in which she was a partner); Michelle Williams (smoking outside); Quentin Tarantino rubbing Paz de la Huerta’s back; Jennifer Hudson; Valentino; Diane von Furstenberg (MrB chatted with her husband, Barry Diller); my Wear What You Want style icon Helena Bonham Carter and her director husband Tim Burton; Sandra Bullock; Harvey Weinstein, whom we congratulated for his big wins for The King’s Speech, and his wife Georgina Chapman of Marchesa; Donald Trump (we go way back with him); Emma Stone; Cameron Diaz; Anderson Cooper; Eric Schmidt of Google (we chatted to him too); Brendan Fraser; Sir Howard Stringer of Sony (he was the chairman of MrB’s Committee to Protect Journalists fundraising dinner in November); Jane Fonda; Jude Law; Matthew McConaughey; Steven Tyler; Carolina Herrera; Jake Gyllenhaal; and, of course, our handsome host, Vanity Fair editor Graydon Carter. 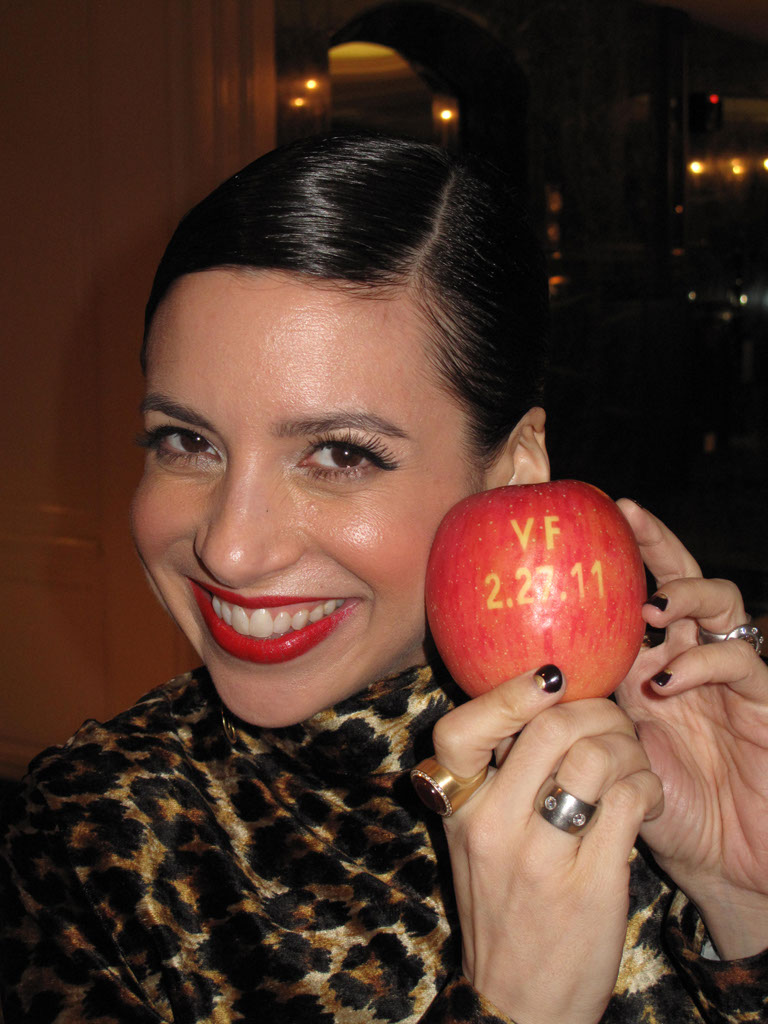 I had no idea I was up for an award myself, but back in New York, my emoticon-heart ring helped gorgeous client/blogging friend Jordana of Clutch 22 score the award for best jewelry at Style Coalition‘s Oscar viewing party. 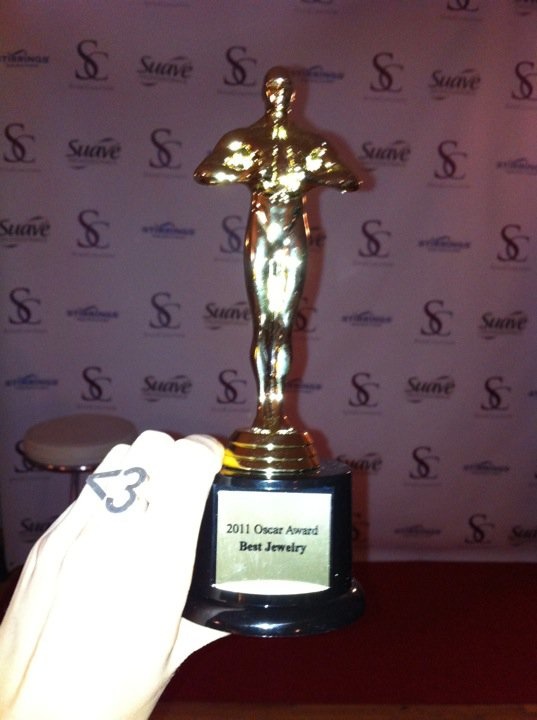 What an honor! I guess I have to give a speech. Well, I couldn’t have done it without Jordana’s jewelry inspiration and finger. I’d also like to thank my mother, who provided craft services while I was growing up. And … and … oh my God! What else should I say? This looked so fucking easy when Melissa Leo did it last night!

You might also like
Out and About With the Stay at Home Mom
Got Milk?
Paris, Day 6: More Castelbajac
Previous Post: « On the Town: Pre-Oscar Party in Los Angeles
Next Post: Great Minds Think Alike: Birds by Rochas, Perris, Hitchcock »