When I was in first grade, I read Alice Through the Looking Glass by Lewis Carroll and was confused by the passage where Alice was rowing a boat with a sheep in it. I wasn’t disturbed by the fact that she was in the boat with the sheep, or that the sheep spoke and knitted. Who among us can say she hasn’t rowed with talking livestock? Last time I rowed a boat with a pig in it, not only did we have a lively conversation but the pig made me bacon, natch. No, what was bothersome to me about the dialogue was the use of the word “feather.”

“Feather!” cried the Sheep, as she took up another pair of needles.

This didn’t sound like a remark that needed any answer: so Alice said nothing, but pulled away. There was something very queer about the water, she thought, as every now and then the oars got fast in it, and would hardly come out again.

“A dear little crab!” thought Alice. “I should like that.”

“Didn’t you hear me say ‘Feather’?” the Sheep cried angrily, taking up quite a bunch of needles.

“Indeed I did,” said Alice: “you’ve said it very often — and very loud. Please where are the crabs?”

“In the water, of course!” said the Sheep, sticking some of the needles into her hair, as her hands were full. “Feather, I say!”

Clearly, Alice was equally puzzled so I didn’t feel too bad. It wasn’t till I was in college when I dated a guy who rowed crew that I realized feathering is part of a rower’s stroke. And right now I’m laughing so hard I’m crying because mere seconds ago, MrB told me that “catching a crab” is a term for a bad stroke due to poor feathering. Like Alice, I thought the sheep was talking about crustaceans … till this very moment!

Anyway, feathers still make me think of Alice and the sheep. The characters instantly came to mind when I saw the fabric used in the Louis Vuitton dress Rachel Bilson wore to the Metropolitan Museum of Art Costume Institute Gala back in May.

Some people thought it was a print but when a piece of the dress’s fabric fell into my hands, I was surprised to see it was full of real pink and white feathers under a transparent layer. Here’s a scan of the swatch so you can take a close look. 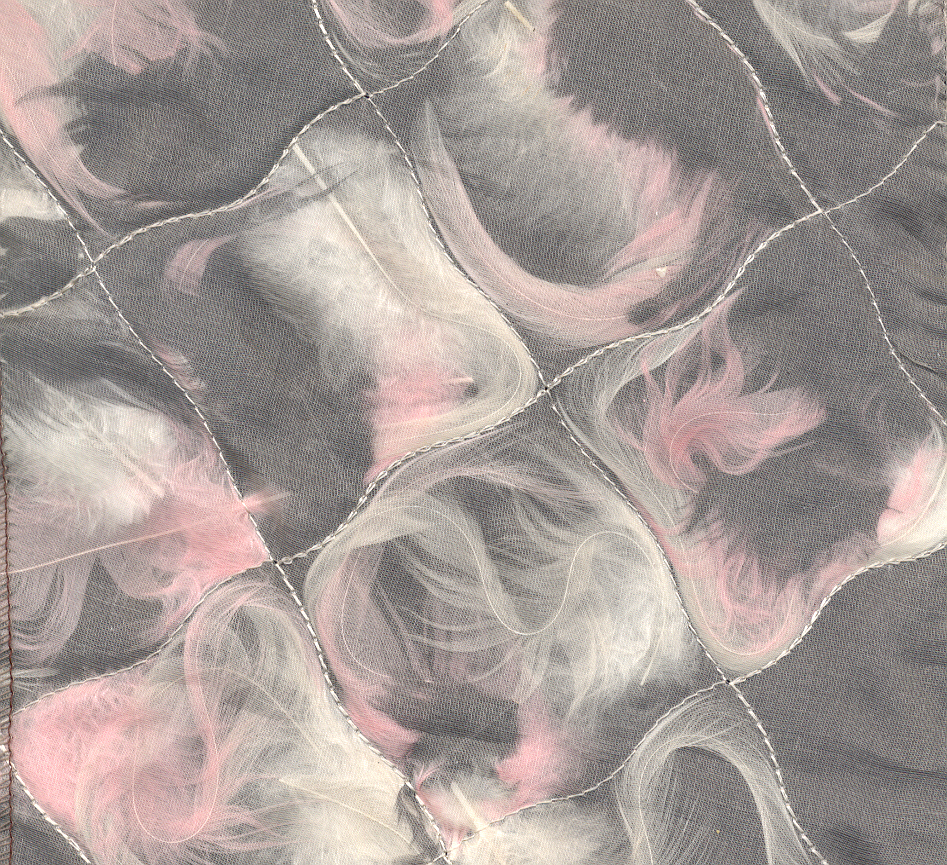 This swatch is from the exact dress that Rachel Bilson wore.

“How unusual,” I said to the pig, who didn’t answer because he was making a ham sandwich. “I bet no one’s ever done colored feathers in fabric before.” But here I am in Paris months later, checking out the exhibit on ’70s and ’80s fashion at the Musée des Arts décoratifs, and what do I find?  Jean-Charles de Castelbajac‘s Autumn/Winter 1973/1974 quilted down jacket with a transparent outer shell and red, yellow, purple, green, blue, white and black feathers. I managed to sneak a bad photo before a guard ran over to scold me. 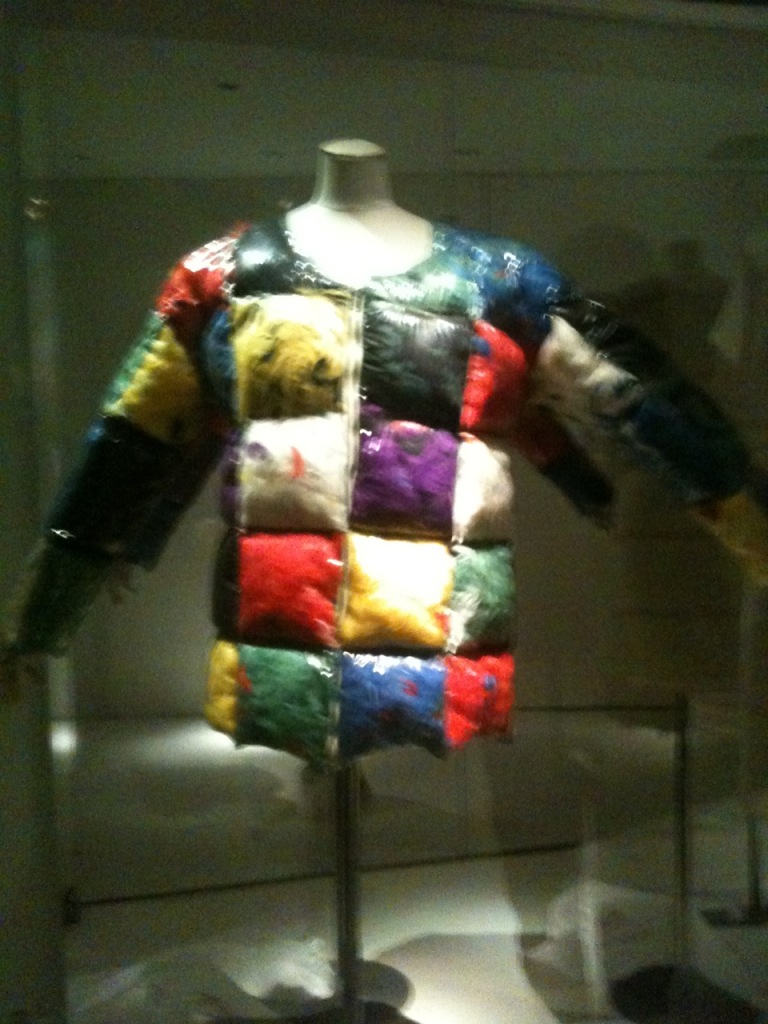 Sorry about the iPhone camera quality.

I am already a big fan of Castelbajac, whom some of you might know as the designer of Lady Gaga’s Kermit coat. Last year, I did well during the sales in London and Paris, scoring Castelbajac’s strapless motorcycle dress, a Lego-print shirt dress, a pair of shoes and a top with a boob cloud. 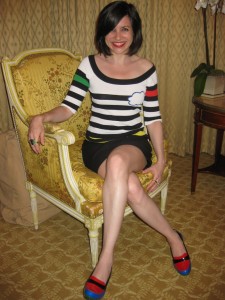 Wearing the shoes and boob-cloud top in 2009.

It’s sale time again, so I went back to the Parisian Castelbajac store, where I took some looking-glass photos. Castelbajac is over Legos and on to the nautical look, meaning you might want to consider his clothes for the next time you go boating with a farm animal. Here I am in miles-wide sailor pants and a matching top that was loaded with gold buttons and braiding. A big gold anchor adorned one of the sleeves. Anchors aweigh!

Today’s other theme is “blurry photos.”

All I need is one of those sailor hats that remind me of a cupcake and I’d be set for a Halloween party. Now that I think of it, a former Navy guy gave me one of those hats long ago. I wonder if I still have it. 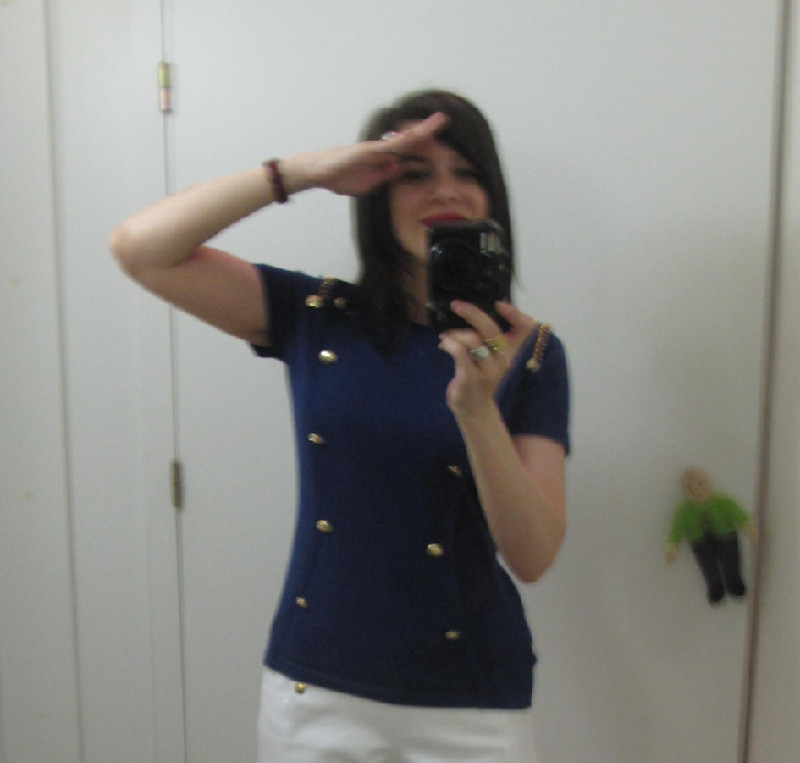 As I said, I thought the look was costume-y and much too literal. But did I get the pieces anyway? You have to guess. Do not ask the pig! That’s cheating.