My designing friend Zang Toi has two white-gold paintings of Marie Antoinette that were love at first sight for me. You know how I feel about queens! 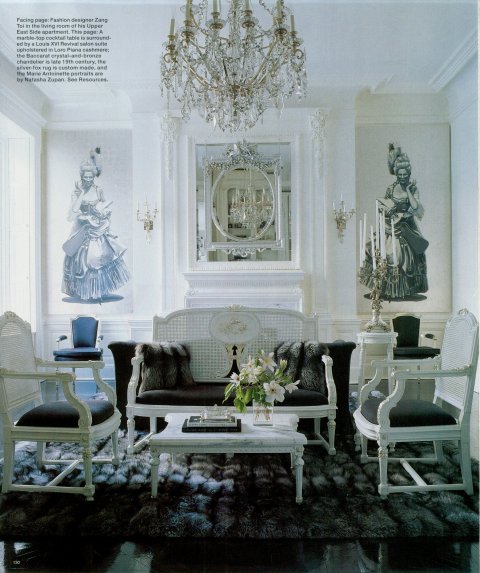 I once bid on a small, pink version of Marie in an auction but lost. I was very upset. 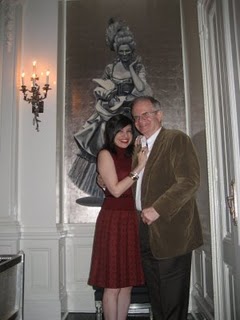 When Zang finally introduced me to the gorgeous artist, Natasha Zupan, I told her I had to have my own Marie Antoinette painting. But after we hung out and she saw me wearing my Boleyn necklace, she suggested painting me as another beheaded queen — Anne Boleyn. Not post-mortem Anne Boleyn, my choice for Halloween 2008 … 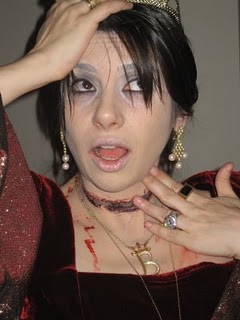 Off with my head!

… but the famous Anne Boleyn portrait that I pored over as a little girl, vowing to someday have a big “B” pendant just like Anne. 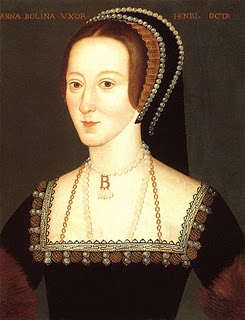 I was fascinated by this image as a child.

My policy is that when an artist says, “I want to do something just for you” it’s good to follow her muse. Especially when we like the same things, as I could tell from these other examples of Natasha’s work. 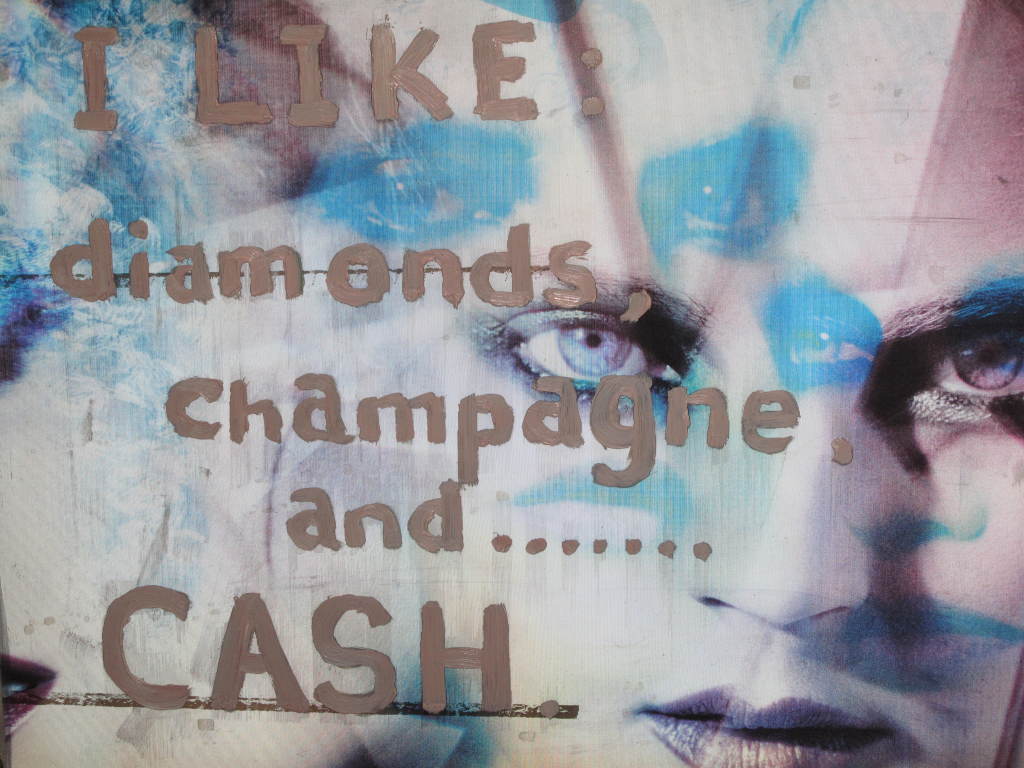 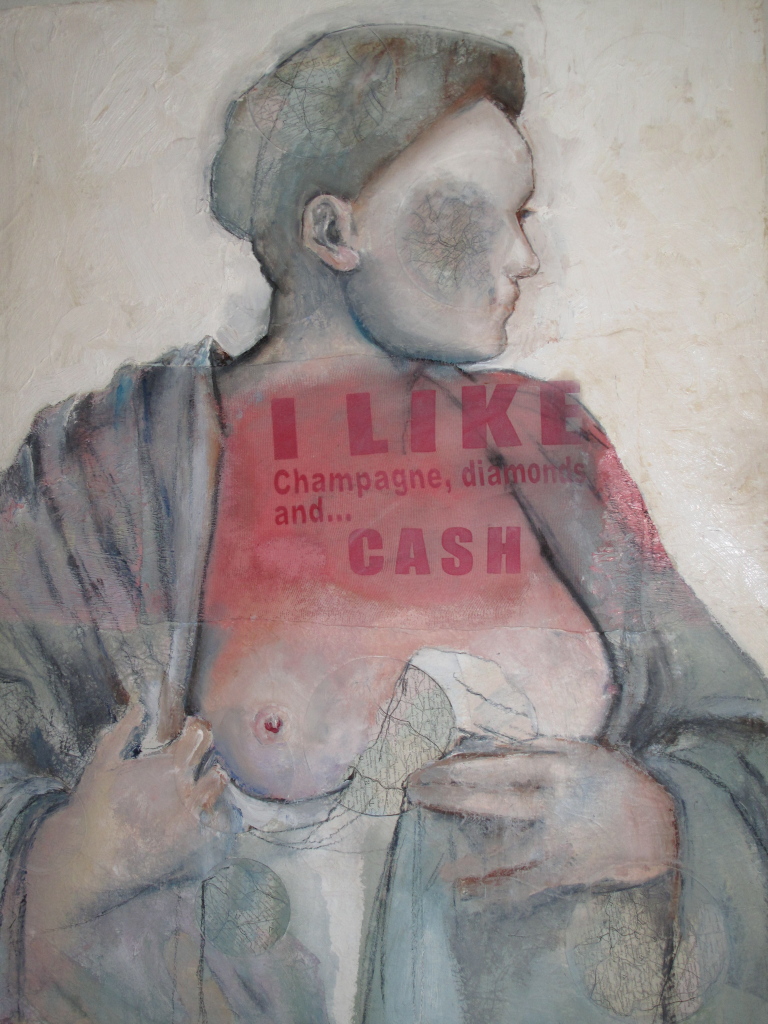 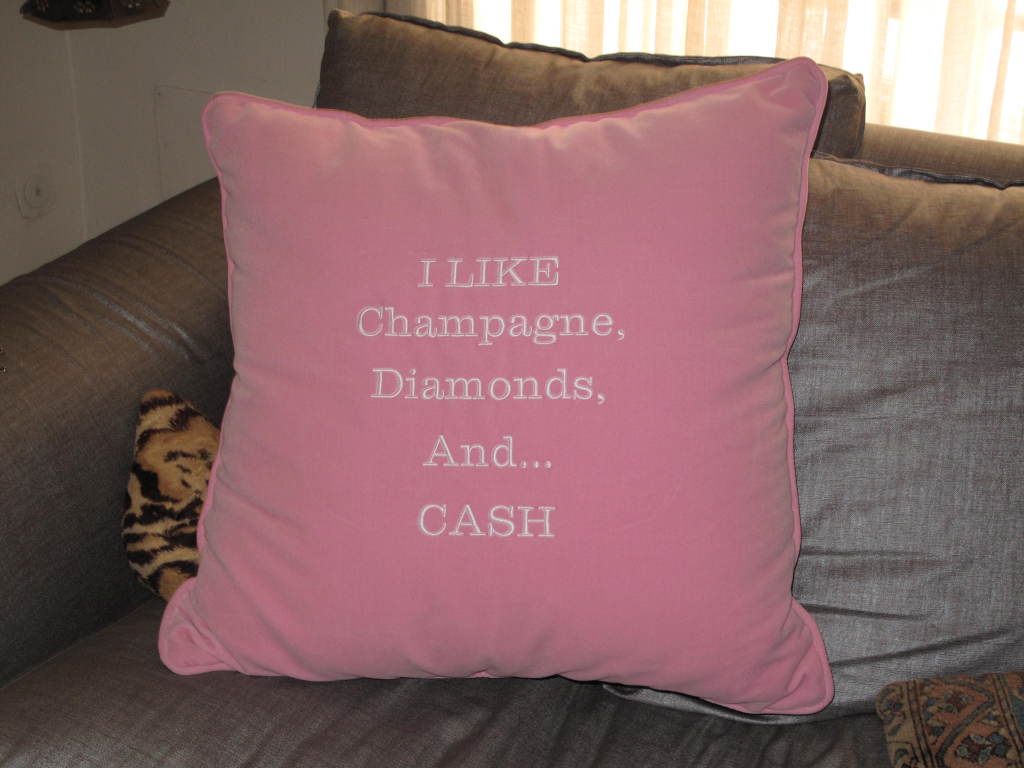 Eventually, we followed Natasha’s muse all the way to Mallorca, where she lives. We’d never been there and were planning a vacation, so why not visit Natasha and my portrait? We arrived last week. Natasha was the hostess with the mostest and showed us all around the island. I adored her Moorish house. 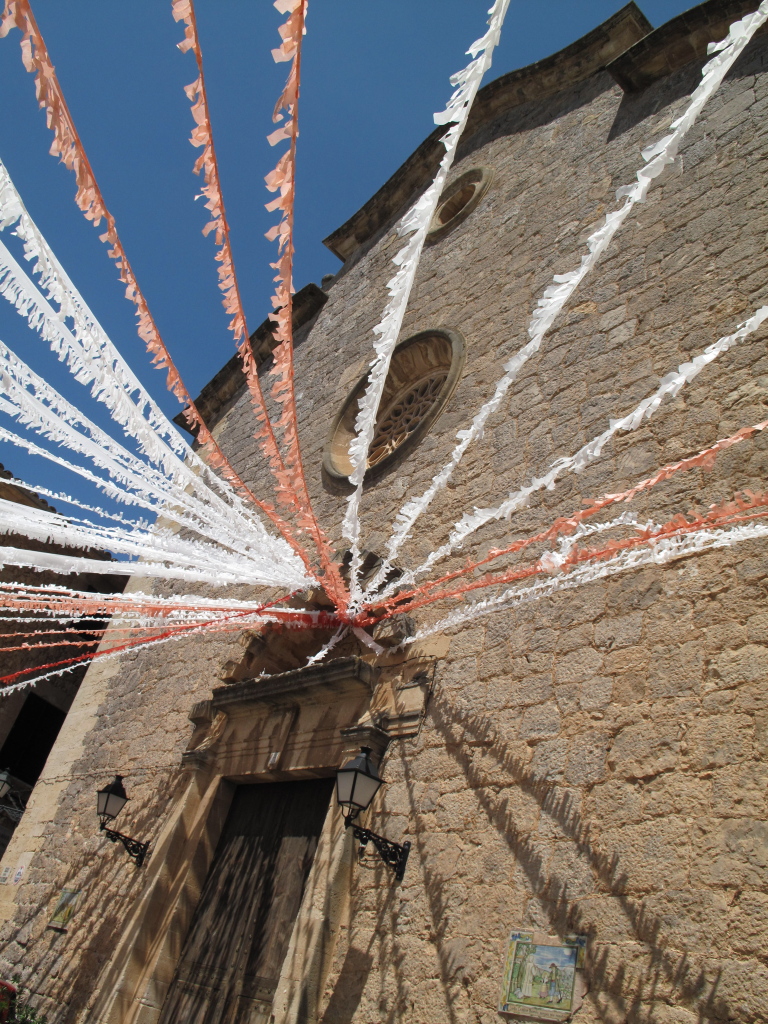 The local church, dressed up for a saint's day. 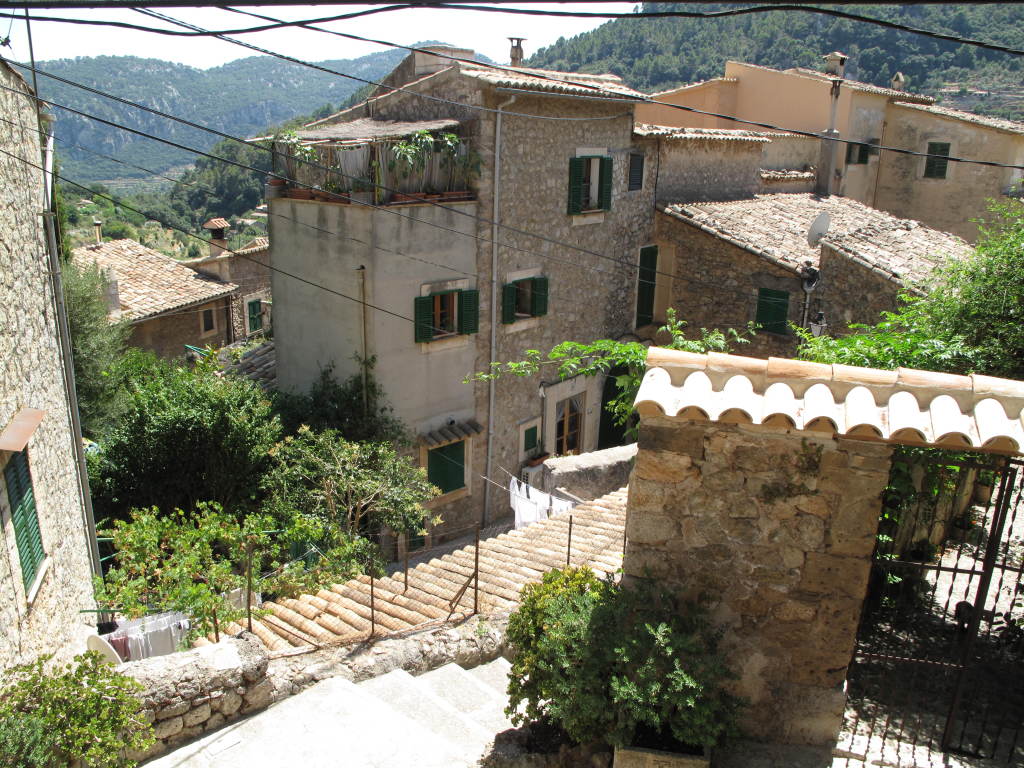 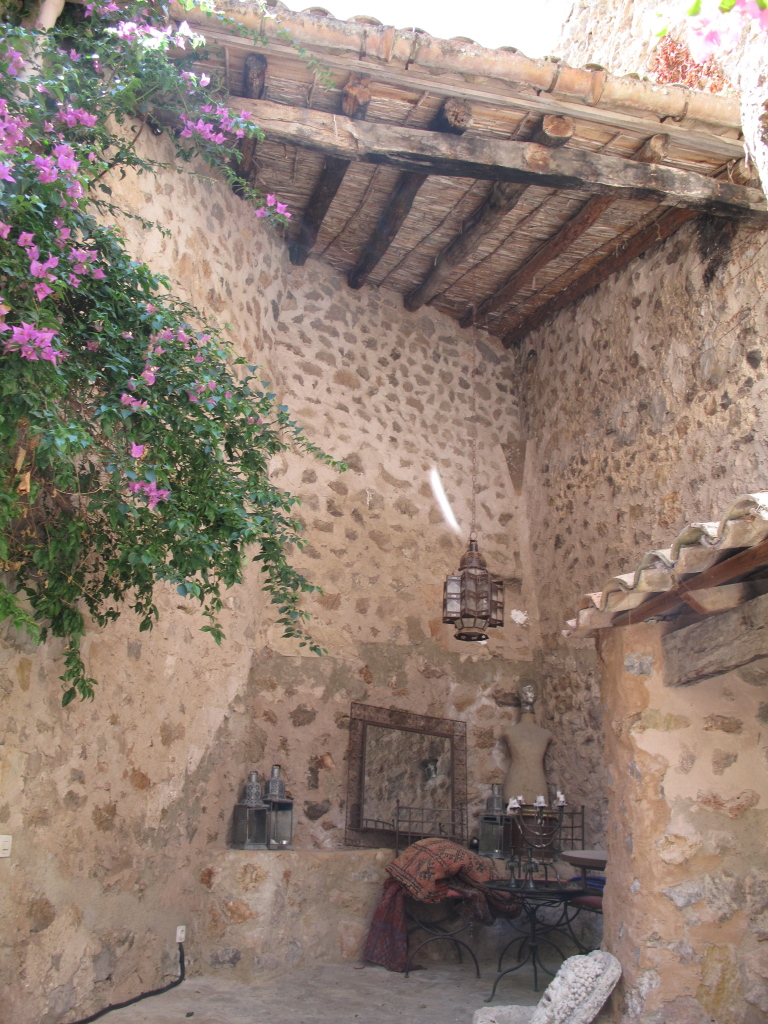 Finally, it was time for the big unveiling. 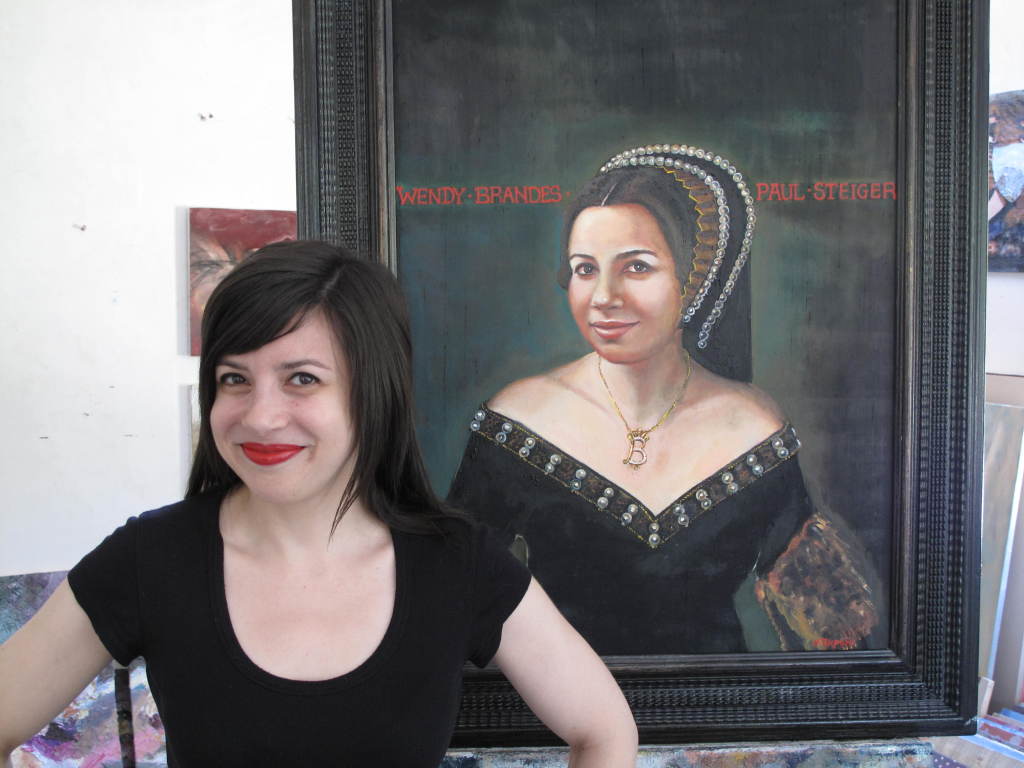 It totally looks like me, right? Natasha updated Anne’s 16th-century dress to something that would be more flattering for me. I liked that choice because, as I’ve found with my jewelry, exact reproductions of old-timey fashions aren’t always very pretty. No red lipstick because it took away from the 16th-century vibe. Each pearl was painted with such care, and real gold leaf was used for my necklace. 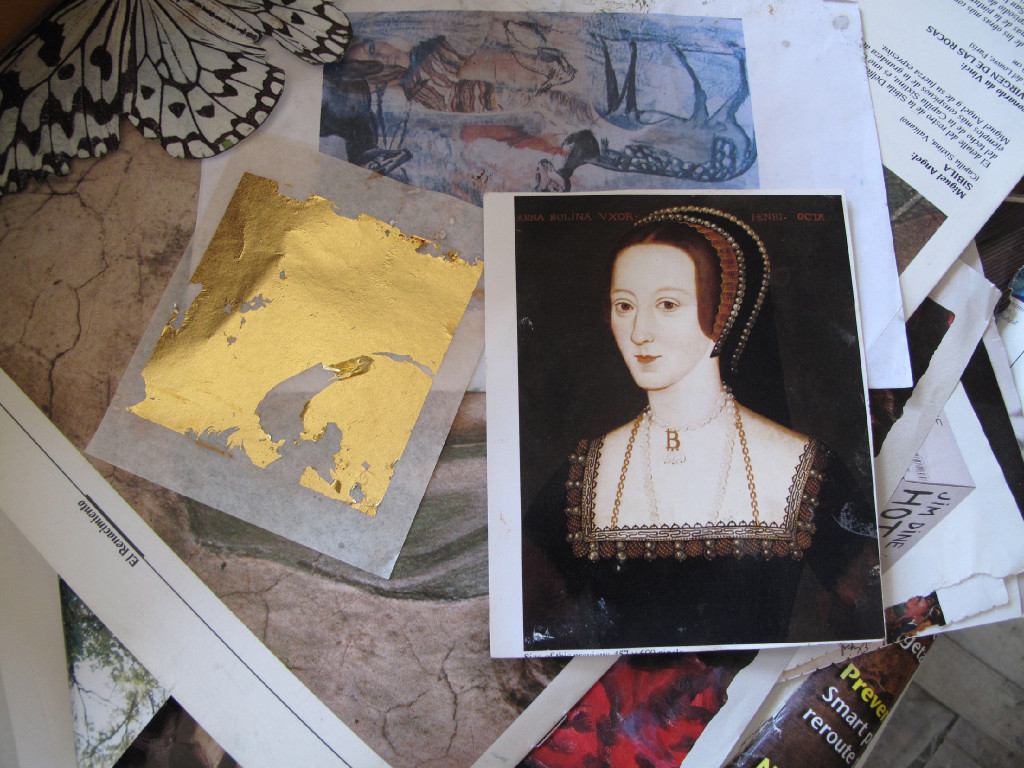 The gold leaf and copy of the Boleyn portrait, on Natasha's table.

The red text with our names was inspired by the text in the original Boleyn portrait (next to Anne’s hat). We had requested it, but after our viewing, MrB suggested that Natasha paint that out so the portrait would be more mysterious. Instead, he wants to put a little gold plate at the bottom of the frame with my name in it, museum-style. 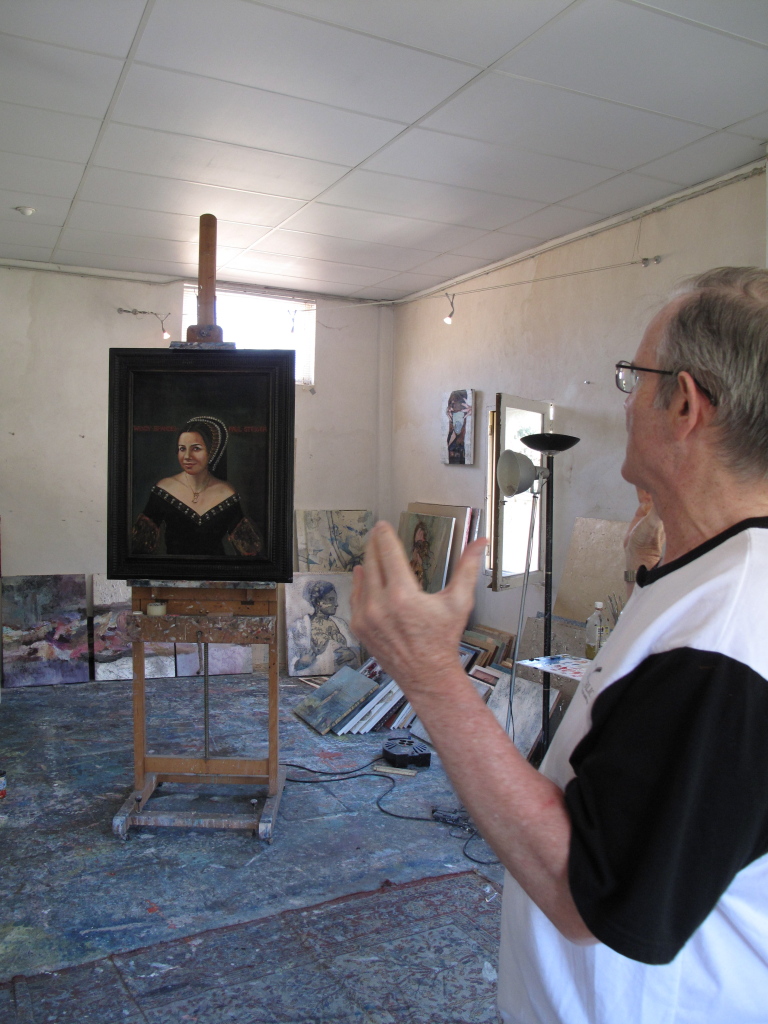 Natasha has a beautiful, bright, airy studio. I loved seeing her art, workspace and inspirations, so I took pictures of every inch. 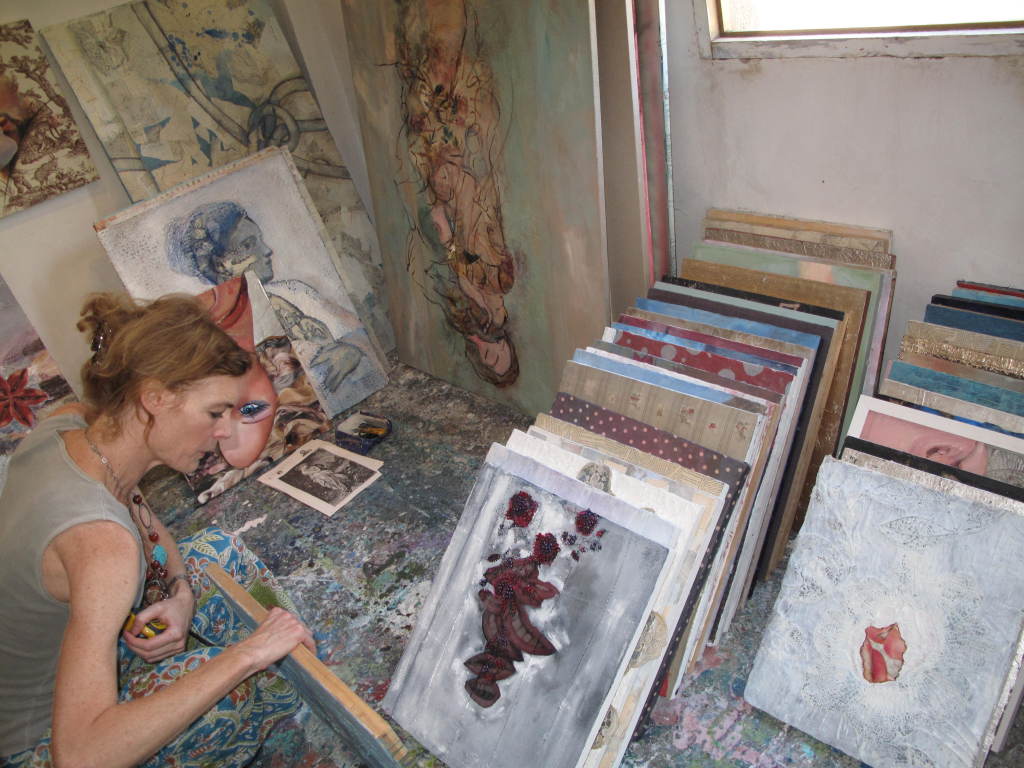 Natasha is having some big gallery shows in London and San Diego, Calif., this fall. I’ll let you know when those open and, if you live nearby, you can see her work in person. In the meantime, here’s one more photo of the artist and her happy customer. 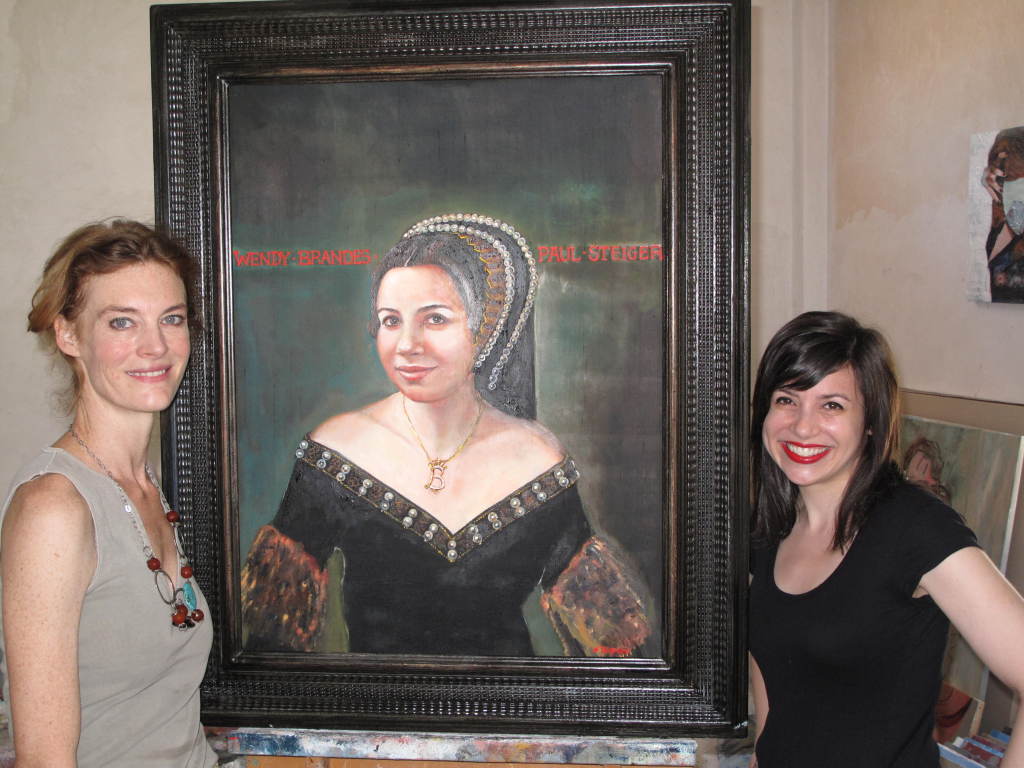 Now I just need to get myself one of those Dorian Gray deals and I’ll be all set!

You might also like
Iconic Image: Rachel Williams for Absolut
The Weeks in Review
What Wendy Wore: "Marsala" Zang Toi at the GEM Awards
Previous Post: « Wishful Thinking: Compact Disk
Next Post: Souvenir From London »