Gorgeous blogger and vintage-clothing purveyor Miss Peelpants (aka Liz) alerted me to an Ossie Clark dress on eBay (aka, as Liz Tweeted, “the Bay of E”) that had the same Celia Birtwell print as an Ossie I recently bought from Miss Peelpants herself. There was a different color scheme though, so if even if you got the eBay dress, we would only be fraternal twins. Oddly, the auction has ended early because the item was “lost or broken.” I’ve never seen that line before! 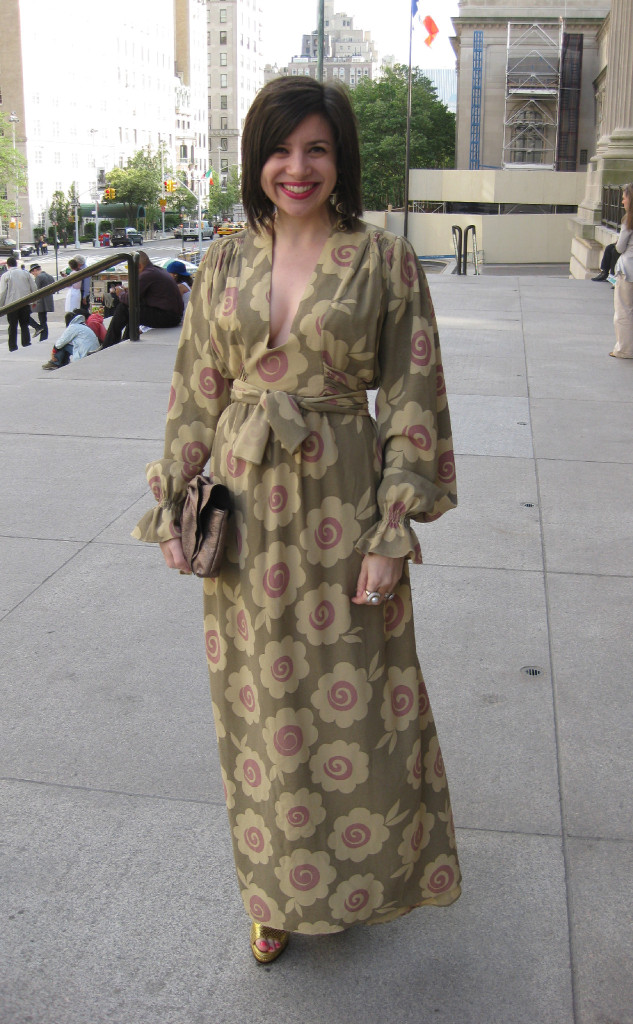 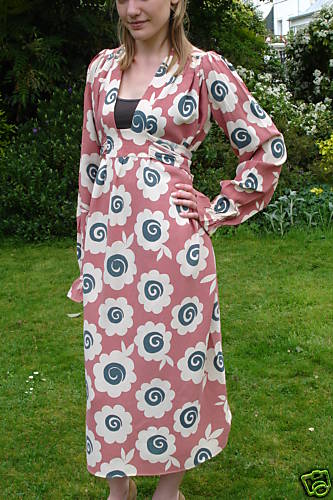 Remember to to snipe anytime you’re bidding on eBay. And if you ever get a dress like this, don’t go all Amish on my ass and wear a camisole under it. Ossie would have wanted you to share your amazing bosom with the world. Just invest in some Hollywood Fashion Tape and you’ll be fine.

Thinking of Ossie and Celia reminded me of someone they knew back in the day: Pauline Boty. Boty, a big, beautiful blonde, was one of the pioneers of British Pop art and the only woman among the four 20-something artists profiled by Ken Russell (Tommy, Altered States) in Pop Goes the Easel, a 1962 film about the scene that aired on the BBC. (The other three artists were Peter Blake, Peter Phillips and Derek Boshier.) A 1993 article in the Independent described her as the “darling of her generation” and “the heartbreaker of the Sixties art scene.”

You can see Boty doing the The Twist at a fabulous-looking party in this clip from Pop Goes the Easel. Keep an eye out for artist David Hockney, best buddy of Ossie and Celia, who sort of bunny-hops through the scene.

Boty went on to shake her moneymaker on the pop-music TV program Ready Steady Go! and had a small role in the movie Alfie. She also created paintings that often dealt with women and gender issues. Her 1963 Marilyn Monroe painting, “The Only Blonde in the World,” is now in the Tate Collection. A painting of Celia Birtwell called “Celia and Some of Her Heroes” is in Portugal.

“It’s a Man’s World II” from 1965 can be seen here. “Scandal 63,” a painting of Christine Keeler, whose affair with a British government minister created a major political scandal known as the Profumo Affair, has been lost, though the National Portrait Gallery has a photo of Boty with the painting here.A  It’s a miracle that all of Boty’s works weren’t lost after her tragic death in 1966. She was only 28 years old and had been diagnosed with cancer while pregnant with her only child. After she died, her brother took most of her paintings and stored them somewhere on his farm. Luckily, in the ’90s, art historian David Mellor saw Pop Goes the Easel and was inspired to track down the paintings.

Mellor’s effort to find the paintings is, sadly, the one bit of posthumous good news for Pauline Boty. Eleven years after her death, her husband, literary agent Clive Goodwin, died of a cerebral hemorrhage in California. He had become very ill while at the Beverly Wilshire hotel. The hotel called the Beverly Hills police who decided he was drunk and threw him in a jail cell, where he died. Boty’s and Goodwin’s artist daughter, named Boty Goodwin, died of a drug overdose in 1995 at the age of 29.

When you stop crying into your keyboard (happy Monday, y’all!) and want to learn more about Pauline Boty, here are my favorite links:

It seems like the It Girls collection in my jewelry line is crying out for a Pauline Boty piece. Don’t you agree? And speaking of collections, don’t forget to check out the Fall ’09 Francis line on my other blog.