I was intrigued to read yesterday’s New York Times article about designer Eric Gaskins, whose business has filed for Chapter 11 bankruptcy protection. Another victim of the economy and, perhaps, by Gaskins’s own account, a lack of a publicity strategy. 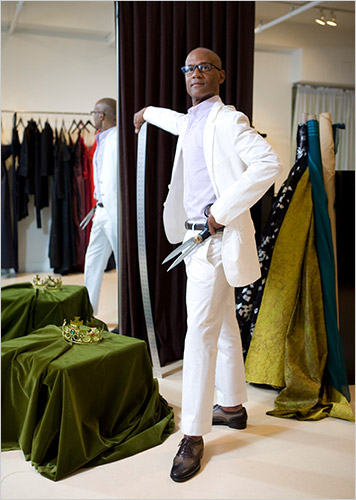 The article was just as much about Gaskins’s bitchtastic blog, The Emperor’s Old Clothes, as it was the end of his business. Gaskins had been writing under the nom de blog Fluff Chance and didn’t out himself till his business had wound down. I’ve had his blog on my Google Reader for a while and read it sporadically. Honestly, I never would have guessed it was written by someone with name recognition. I may have left a comment once, but never added him to my blog roll because I had a feeling that was going to be a one-way street.

One thing about the Gaskins blog that made a lasting impression on me was what he said about Dolce & Gabbana in a May post:

“Dolce and Gabbana are headed for a tumble. I said this at least 6 months ago and a few notable blogs like Business of Fashion and that heinous spamometer Fashionista took me to task over such a falsehood. Mark my words, the clock is ticking VERY loudly. All retail/wholesale operations in America are going to come to a close. The Director of marketing in North America, Mr. Taub is out and no one is replacing him. Italy , the home base is in for it as well. All is not right in that grand house of cards. Though the press is trumpeting the unveiling of the new fragrances , which will be a lucrative market, it doesn’t erase or explain the fact that the collections will cease to be distributed in the U.S.”

Pretty drastic! I have quite a few beautiful Dolce & Gabbana suits from my corporate days and still feel fond of the label, which always fits me perfectly. I also really like the “Mickey Mouse ears” shoulders they did this spring. Anyway, when I read that blog post, I asked a few “in the know” people if they’d heard anything about this, but no one had. Last time I was in Bergdorf Goodman, D&G had as much floor space as ever. So I’m interested to see what will come to pass. I guess if that bad news comes, we can say Gaskins said it first, but I hope that doesn’t happen.

Separately, isn’t Gaskins an elegant and handsome man? He needs to fix up that blog so that it lives up to his personal look. Damn! That thing needs some proofreading and the occasional blank line thrown in between paragraphs, at the very least. Eric, if you ever read this, I promise you I will give you a blog that’s so pretty you’ll want to put your name all over it.A  If you’re hard up for cash, I’ll settle for a few custom-made dresses. Holla at me, you gorgeous bitch!