I first went to London when I was 15. During that trip, I bleached my bangs blonde and got my left ear pierced for a second time. When I arrived home, my mother was very upset about these things. Good thing I didn’t tell her that I smooched a 20-something guy during the whole flight to England from New York. What?! I told him I was 18! What was he supposed to do, card me? He and I stayed in touch for quite a while after that. In fact, he’s the one who gave me the guitar-pick earring from this post. If you’re reading this, Steve who went to school in Connecticut, do you still love The Fixx?

Anyway, I’ve been to London many times since that first visit and I don’t feel the need to go to the obvious places like the British Museum, the Tate and Westminster Abbey every time I’m here. Today I wanted to do something completely different, so, continuing last night’s body parts theme, MrB and I went to a gallery that was showing nude photos of Madonna from 1979. We checked out the photos, left, walked a block, turned around and marched back in so MrB could buy us a nude Madonna in honor of our eighth wedding anniversary on July 22. I think we’re going to hang her in our bedroom. Here I am outside the gallery. We considered buying the print I’m posing with but decided on another one. You’ll have to wait till it arrives in New York to see it. 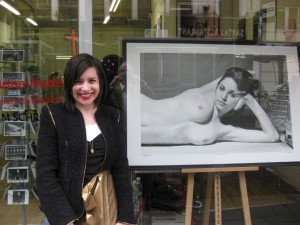 After Madonna, we went to the Courtauld Gallery at Somerset House, which has everything from 14th century art to Van Gogh to Manet’s famous A Bar at the Folies-Bergere. I studied art history when I attended Columbia University back in the day, so I might have made a brilliant remark to MrB about Georges Seurat‘s Pointillistic style. Or, I might have said, “I love that polka-dotty stuff. I want to cuddle it.” But you’ll never know for sure, will you? 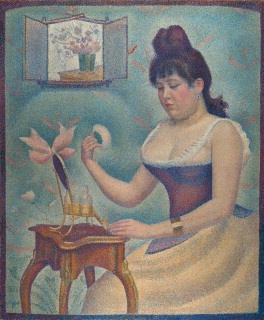 "Young Woman Powdering Herself" by Seurat

Later, we had dinner with our friends Al Radley and Caroline Carr of Ossie Clark fame. Al asked us if we liked fish and when we said yes, he took us to a place named Fish! (The exclamation point is part of the name.) We strolled near the Thames before and after. Al loves to be by the water. 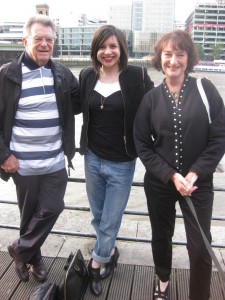 Al, WendyB and Caroline. Sandy the poodle was camera-shy.

Tonight I found out that Caroline was the designer for the Radley line for 35 years.  I’m guessing this dress and this dress are her work. Caroline also worked on the Ossie Clark for Radley line. Coincidentally, as we walked along after dinner, we came upon an outdoor exhibit of fashion students’ interpretations of the Yeoman Warders State uniform. A student from the Royal College of Art participated, so there was a sign listing the names of important college alumni … and above that, there was this sex-ay photo of alum Ossie. He seems to turn up everywhere. 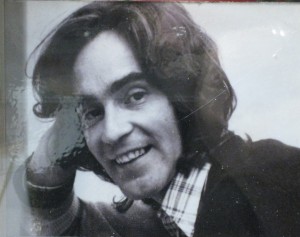 Ossie Clark was a handsome dude.

I had one more artistic moment in front of a mural before Al took us back to the hotel by the scenic route, which is our tradition. Some people might say we were lost, but we prefer to say that we had a wonderful tour of London in good company. Sure, we might see some of the same intersections over and over again, but as writer Milan Kundera said: “Happiness is the longing for repetition.” 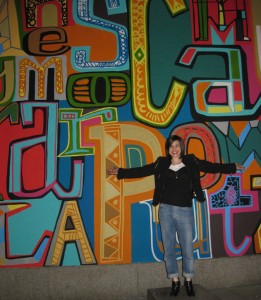 In the Shad Thames area.

Meanwhile, back in New York, the first ever Francis sample sale is underway. Click here to get the details and see some of my gorgeous friends in their Francis clothes!