I stumbled across a great video of designer Todd Oldham‘s 1993 Spring show here. The clothes are colorful, models are glamazons and everyone looks like they’re having a great time. So much better than a lot of shows today, where blank-faced, half-starved souls wobble down runways. And 1993 Todd is as cute as a button.

My vintage Todd Oldham skirt is looking a little rumpled from recent travels, but I always get lots of compliments on it. 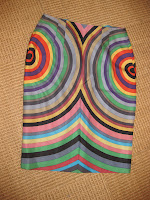 Oldham shut down his top line in 1998. I previously wrote about him here and here, when he became the creative director of Old Navy, though I feel like I haven’t heard much about him since. Is everything okay, Todd Oldham?

UPDATED TO ADD: Well, where was I last month when the dude done up and left? Sounds like things were very NOT okay, according to this account. And here’s what WWD had to say on March 3:

LITIGIOUSLY YOURS: Todd Oldham’s departure from Old Navy last month might have been relatively quiet, but the potential for dueling lawsuits could soon turn the volume up on the split. L-7 Designs Inc., which owns the Todd Oldham trademarks and lists the designer as its president, brought a suit against the retailer in Manhattan federal court on Feb. 18. Lawyers for the company filed the complaint under seal. On Monday, the design firm would reveal only that the suit lists breach of contract and other claims as causes. Gap Inc. spokeswoman Louise Callagy said the company was disappointed by Oldham’s decision to take what it called a “business disagreement” to the courts. “We are confident in our ability to defend ourselves on all points and, in fact, we plan to file this week our own breach of contract claims against Todd Oldham’s company, L-7 Designs,” she said. On Feb. 20, with little fanfare, Oldham left his post as creative director for the Old Navy brand, a post he’d taken on in October 2007. At the time of his hire, the company spoke of eventually marketing clothes, and possibly home and beauty products, under the designer’s name. The branded line never surfaced in his roughly 17 months with the retailer.

I think I enjoyed the above paragraph far more than I could ever enjoy a schmatte from Old Navy, especially because, “The branded line never surfaced in his roughly 17 months with the retailer,” makes me feel like a really hard worker in comparison. If you gave me 17 months and enough corporate money, I’m sure I’d have “Brandes” stamped on everything in sight. Crappy t-shirts and shoes that smell like plastic? Bring them on.

UPDATED AGAIN TO ADD: When I said “shoes that smell like plastic,” I really meant “shoes that smell like a Union Carbide incident.” When I first opened up these shoes — my one and only Old Navy purchase — I was nearly knocked out by the poisonous gas that arose from them. Once they aired out, I liked them till after the first wearing, which stretched them out like crazy. It never seems to pay off when I get the cheap stuff.