Time to get back to my 12th century friend, Empress Matilda. As I explained in my first post on Matilda, she was the rightful heir to her father, Henry I of England, but upon her father’s death in 1135, Matilda’s throne was usurped by her less-competent cousin Stephen. The obstreperous English barons rallied to Stephen’s side because they couldn’t abide the idea of a woman leader.

Another strike against Matilda was her second husband, Count Geoffrey of Anjou. Anjou, a region in what is now western France, was a longtime enemy of the region of Normandy and Normans had been ruling England since 1066. Ironically, Henry I had forced an unwilling Matilda to marry Geoffrey in order to create an allegiance between the Normans of England and the Angevins, as the peeps of Anjou were called. Matilda was 11 years older than Geoffrey when they wed, and she already claimed the title of Empress thanks to her first marriage to Henry V, the Holy Roman Emperor. She wasn’t too pleased to be marrying a 15-year-old count, even if he was good-looking. 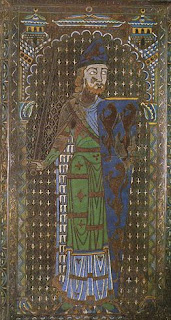 Handsome Geoffrey of Anjou was quite the ladies’ man

The counts of Anjou were notorious for their violent tempers: legend had it that they were descended from Melusine, the demon daughter of Satan. Matilda and Geoffrey argued constantly, and separated at one point, but they still managed to have three sons. In 1139, when Matilda sailed to England to pursue her inheritance, she left Geoffrey behind to conquer Normandy. And babysit.

Matilda’s finest moment came in February 1141, when her forces, led by her illegitimate half-brother Robert of Gloucester, defeated Stephen’s army and captured Stephen. It was quickly followed by her worst moment, as the crown slipped from her hands. After her victory, Matilda declared herself “Lady of the English” and set about giving orders. She didn’t bother to bat her eyelashes at the barons — who were still dubious about a woman ruler — nor was she willing to schmooze the citizens of London who were looking for some tax breaks from their new government. Meanwhile, Stephen’s wife — also named Matilda — was coming with an army to free her husband. The unschmoozed Londoners and ornery barons went back to Stephen’s side and Empress Matilda fled without having had a coronation. When the pro-Stephen forces captured Robert of Gloucester, the empress was forced to exchange Stephen for him. Stephen was back on his throne by November 1141.

A coin with Matilda on it
I was initially disappointed by Matilda’s failure to exercise enough diplomacy to obtain the crown for which she fought so hard. I know it’s difficult to cope with the hordes of asshats, jackholes, backstabbers, users and liars who don’t deserve the time of day, but sometimes it’s necessary to play nice. Unfortunately, that’s especially true for women, who, to this day, get called all sorts of names for behavior that would be seen as “strong” in a man. On the other hand, even the uncivilized dudes on The Sopranos knew it was a good idea to kiss a guy and give him some prosciutto before killing him, so I felt like Matilda should have realized that she needed to keep her enemies close.
However, I have since decided that Matilda was emotionally exhausted from a lifetime spent coping with violent, abusive, bossy, lying men; she wanted to get down to business without having to be sweet to any more losers. Consider the main men in her life:
I think Matilda was just mad as hell and didn’t want to take it anymore. Of course, that attitude hurt her cause, but I understand why she went there. I wanted to create a piece of jewelry that honored her strength and determination, so my Matilda Necklace is a sword. 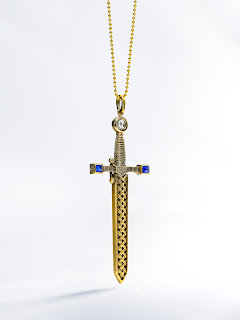 I’m sure you’ve seen some sword pendants before. They’ve become fairly popular. But I bet you haven’t seen too many that can be pulled out of the scabbard. Well, this post has gotten very long, and I haven’t even finished Matilda’s story or gotten to the book list. Tune in next week for Matilda Part III.

UPDATED TO ADD: I want to give a shout-out to my gorgeous client, Melissa O. Melissa bought the first Matilda necklace I ever made on the first day it was available. I had been wondering who was going to be badass enough to buy that necklace. Melissa, that’s who! Don’t mess with her; she’ll cut you!

You might also like
Why Does Buyer's Guilt Focus on Fashion?
Jewel of the Month: Empress Wu Dragon Ring
Happy Belated Birthday, Queen Liz!
Previous Post: « Words of Fashion Wisdom From Xtina
Next Post: Having an ’80s Flashback »