A few months ago, my husband talked me into buying a vintage Herve Leger bandage dress. I wore it for the first time this weekend. I can carry off tight. I can even carry off short. But short and tight? I felt like a hoor, as they would say on The Sopranos. Or mutton dressed as lamb, which they wouldn’t say on The Sopranos. However you describe it, I was quite mortified, but I spent good money on this dress and by God I was going to wear it.

The top half looks fine. 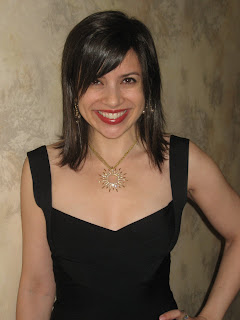 Help! I’ve fallen into a bandage dress and I can’t get out!

I consoled myself by thinking, “Straight men think this is the Best!Dress!Ever!” Of course, straight men also like Hooters outfits and I never wear one of those except behind closed doors. Ha ha! That’s a lie. I actually prefer a cottontail and bunny ears for a perkier blogging experience.

Anyway, I was proven correct in my straight-men theory when I received an email from a (straight, male) friend whom I shall call “Thomas Wriothesley.” Thomas wrote: “i must say yr dress was spectacular — OMG OMG OMG … since you were reluctant to go up and down even one stair, i figured asking you to polish my shoes was outta the question HAHAHAHA.” Oh, look, there goes my husband out the door. He’s muttering something about “kicking that guy’s ass.”

Full-length photo has been censored.

Despite this rave review, I decided that when I wear this dress again, as I must in order to amortize the cost, I might feel less naked with closed-toe shoes, tights, a cottontail and/or a burka.

Luckily, my uncomfortable outfit and the glares of other women did not lessen my enjoyment of the play we went to see. “A Royal Mess” is a comedy about Henry VIII and Anne of Cleves. Really! It was like it was written just for me. My friend, “Thomas Wriothesley,” is a member of the amateur theater club that put on the production and he played Thomas Wriothesley. I was going to encourage everyone in New York to go see this, when I noticed that it’s by invitation only. Ooh la la! Very exclusive, Thomas!

We all had drinks after the play and I tipsily lectured several people at length about Henry, AnneC, Katherine Howard and assorted other Tudor figures. When I stopped to take a breath, they all ran for their lives, except for a bunch of guys who wanted me to polish their shoes.

But what really made my night was Thomas’s discovery of the New York Post’s coverage of Henry VIII. And this image from the club’s newsletter. 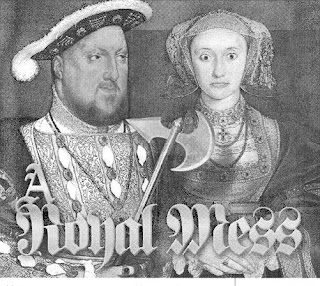 I just noticed that the newsletter says, “Ushers will deny admittance to those who are inappropriately attired.” Whew! Close call for me.