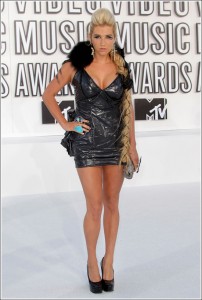 NOW Singer Ke$ha in a garbage-bag dress at the MTV VMAs in September 2010. THEN Debbie Harry in a garbage-bag costume in Blondie’s 1980 Atomic video.* *Trivia about Atomic: The late model Gia Carangi appeared in the video. “Oh, your hair is beautiful” is one of the best lyrics of all time. OF ALL TIME!