The first part of Reconstruction: America After the Civil War airs on PBS at 9 p.m. tonight (also available for streaming. From the website:

“The series explores the transformative years following the American Civil War, when the nation struggled to rebuild itself in the face of profound loss, massive destruction, and revolutionary social change. The twelve years that composed the post-war Reconstruction era (1865-77) witnessed a seismic shift in the meaning and makeup of our democracy, with millions of former slaves and free black people seeking out their rightful place as equal citizens under the law. Though tragically short-lived, this bold democratic experiment was, in the words of W. E. B. Du Bois, a ‘brief moment in the sun’ for African Americans, when they could advance, and achieve, education, exercise their right to vote, and run for and win public office.”

This four-hour documentary, presented by MrB’s friend Skip Gates (aka Professor Henry Louis Gates, Jr.) is very enlightening. I went to a preview and a panel discussion a few weeks ago, and gained a new perspective on how aggressively states fought the rights granted to slaves and the descendants of slaves in the wake of the Civil War and the passage of the 15th Amendment. By that, I don’t mean I wasn’t aware of how oppressive America was: We wouldn’t have needed the Civil Rights Act of 1964 and the (now gutted) Voting Rights Act of 1965 if discrimination hadn’t been a way of life. But I didn’t know the extent of the freedoms that briefly bloomed during the Reconstruction period, and how cruelly and methodically those were snatched away.

The event took place at the New-York Historical Society, where I was also able to see an exhibit called “Black Citizenship in the Age of Jim Crow,” which further illustrated the systemic targeting of black people. From that, I finally learned where the “grandfather clause” originated. It doesn’t simply mean “old-timers get special treatment/aren’t affected by this new rule,” which is the way we use it now.  It was a law passed by seven Southern states in 1898 stating that only the descendants of people who had been allowed to vote before 1867 would be exempt from educational, property, and/or tax requirements for voting. You see what the catch is? Because the 15th Amendment granting voting rights wasn’t enacted until 1870, this disenfranchised black people in perpetuity! I promise you I’m not saying someone was “grandfathered in” ever again.

Skip has a new book to go with the documentary called Stony the Road: Reconstruction, White Supremacy, and the Rise of Jim Crow. 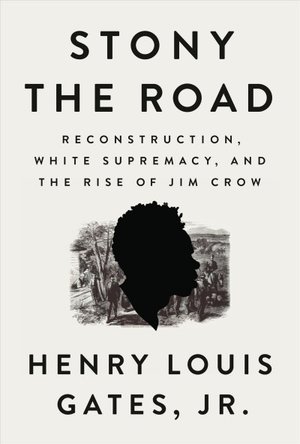 Click to purchase from Barnes & Noble, because Amazon is an evil empire.

The second part of Skip’s documentary airs next Tuesday, April 16. I urge you to watch — it’s only four hours total — considering the surge of white supremacist terrorism and law in the U.S. now. None of that is accidental or unprecedented. It’s part of our national identity, and we need to acknowledge the history in order to fight it in the present.

You might also like
Photos From the Strike
The Sky Is Falling!
My Slogan for Warren: Pretend She Has a Penis 2020
Previous Post: « Fashion Repeats Itself: High-Heel Flip Flops
Next Post: Jewel of the Month: Laura’s Tourmaline Ring »