I’ve been tempted all day to say something world-weary about Giving Tuesday — the way it’s supposed to absolve us of the shopping sins of Black Friday/Small Business Saturday/Cyber Monday yadda yadda — but there are so many good causes getting attention that I had to go all Moonstruck (mentally) on my jaded ass.

Cher Snap Out Of It GIF from Cher GIFs

I’ve been on the fundraising side for nonprofits, so I know that it’s challenging and necessary work. I’ve felt actual desperation about paying an organization’s bills — and I’ve learned that austerity isn’t the answer for charities (or governments). You can only cut so much while still fulfilling your mission, so you’ve got to bring in new money. Anything that helps is great, so Giving Tuesday is deserving of my wholehearted support. And, if you’re still looking for a worthy cause to donate to at the very end of Giving Tuesday 2018 — or any other day of the year — I recommend the Committee to Protect Journalists, which I’ve supported for many years.

Every November, CPJ holds a black-tie dinner to honor the winners of its International Press Freedom Awards. (That was the event to which I wore a vintage Scaasi dress last week.) The five awardees for 2018 were all women, as my friend Sheila Coronel — a dean at the Columbia University School of Journalism — pointed out in her passionate and inspiring introduction for Maria Ressa, the CEO and executive editor of Rappler, a Philippine news website.

Ressa founded Rappler in 2012 and, since then, the site has become known for its critical coverage of President Rodrigo Duterte’s extrajudicial killings of thousands of his own people, as well as his other autocratic actions. Sheila and Ressa weren’t hesitant to GO IN on Trump, the environment that created him, and the environment he, in turn, creates. Ressa warned that autocrats take inspiration from each other, and that social-media companies’ role in normalizing atrocities must be dealt with. “We need to hold tech platforms to account,” she said. “They are now the world’s largest distributors of news … they need to protect the public interest.” The U.S. journalists in attendance — their freedom of speech and physical safety threatened like never before — hopefully paid attention to Ressa’s urgent message that the time for them to fight for rights is NOW. “We need to be truthful, not neutral,” she said, noting, “You don’t really know who you are until you’re forced to fight to defend it.” Finally, she declared, “We are Rappler and we will hold the line!” 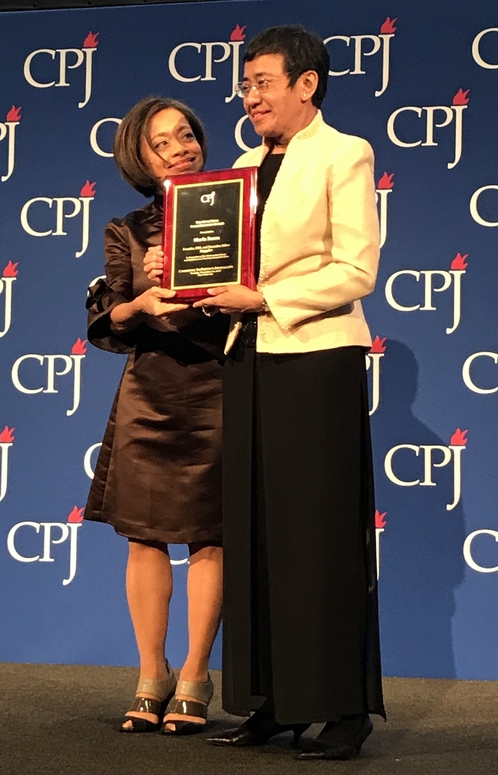 The other honorees included Amal Khalifa Idris Habbani, a freelance journalist in Sudan who has been arrested more than once and tortured; investigative reporter Luz Mely Reyes of Venezuela, who said, “We persist, insist, and resist”; and Anastasiya “Nastya” Stanko, a Ukrainian broadcast journalist who said, “Journalism is the best form of patriotism.” There was one surprise guest because CPJ always honors a jailed journalist in absentia to draw attention to that case and pressure the government in question. This year, the awardee was Nguyen Ngoc Nhu Quynh, one of Vietnam’s most prominent independent bloggers, who is known by the penname Me Nam or “Mother Mushroom.” In 2016, she was sentenced to 10 years for “propagandizing against the state,” but, happily, was released last month and able to accept her award in person.

As part of her acceptance speech, Mother Mushroom pointedly quoted the Emma Lazarus poem immortalized in a plaque on the Statue of Liberty with those famous lines:

“Give me your tired, your poor,
Your huddled masses yearning to breathe free”

When a jailed journalist is honored, the award is held for them and presented at the dinner if/when the journalist is released. There were two of those awardees last week. Ahmed Abba, a Cameroonian correspondent for Radio France Internationale, was there in person to accept his award from 2017. He said that while imprisoned, he actually received the postcards of encouragement the attendees wrote to him from last year’s dinner. Tibetan documentary filmmaker Dhondup Wangchen accepted his award from 2012 — he’d been imprisoned by China in 2008. After he was released in 2014, he was closely monitored until just last December, when he escaped China and was granted political asylum in the U.S.

I used to go to the International Press Freedom Awards and feel thankful that we in the United States weren’t in desperate need of CPJ’s advocacy because we were fortunate enough to have our Constitution, with its First Amendment protecting the free press. Obviously, I didn’t expect we’d have a president who seemingly has never read the Constitution. As a result, it’s been a bad year for U.S. journalists. Of the 45 journalists killed this year around the world, four of them were shot this June at the Capital Gazette newspaper in Annapolis, Md., along with their business-side colleague, Rebecca Smith. This fall, Saudi Arabian dissident and Washington Post journalist Jamal Khashoggi was assassinated at the Saudi Arabian consulate in Istanbul — and our president is standing by the Saudis while repeatedly calling the press the “enemy of the people.” (For the ominous history of that phrase, click here.) Other newsrooms received pipe bombs and threats. Experts on authoritarianism call this stochastic terrorism. Meanwhile, CNN had to sue Trump for barring one of its reporters. As Maria Ressa said, the time to fight is now.

CLICK HERE TO DONATE TO CPJ.
You might also like
From "Hold My Beer" to Dan Rather at Spectator
What Wendy Wore: Columbia Spectator Slow Fashion
Wednesday's Video: Journalist to Jeweler
Previous Post: « Don’t Screw Around! Get Your Cyber Monday Earrings.
Next Post: Wednesday’s Video: Meet Me in Columbus »