There are 43 days until the Election Day that might be the most important one of our lives. We need to flip the House blue to save our democracy. If we don’t, the Republican party — which has no consistent belief system aside from opportunism — is going to continue to deprive most of us of our rights, opportunities, health, environment, and decency in order to concentrate power in the hands of a few billionaires and their lackeys.

The Republicans are way beyond hypocrisy, which Merriam-Webster defines as “the quality of acting in a way that goes against claimed beliefs or feelings.” Paul Krugman opted for the term “bad faith” in the New York Times last week. As he pointed out, “bad faith” is a legal term meaning “intentional dishonest act by not fulfilling legal or contractual obligations, misleading another, entering into an agreement without the intention or means to fulfill it, or violating basic standards of honesty in dealing with others.” “Bad faith” is not simply “do as I say, not as I do.” It’s a deliberate plan to harm.

We are all responsible for what happens next, and we all need to take action. If you haven’t done anything yet, it’s not too late. In fact, this is your moment! Person-to-person interaction is the best way to get out the vote. Here are a few options:

Got my Indivisible chapter writing #postcardstovoters for @biaggi4ny ! @indivisibleteam #gotv #newyorkprimary … if you live in New York remember that the state primary is THURSDAY, Sept. 13. Yes, we also had a primary in June. That was for federal officials. State is separate for dumb reasons related to Republicans in the state senate. They don’t want people to vote because they know they will be voted out so they make it difficult! Vote #democrat to flip our state senate and get voting reform.

I went canvassing for my second time ever on Saturday on behalf of Liuba Grechen Shirley, who is the Democrat running for Congress against the incumbent Peter King on Long Island. She’s one of the hundreds of first-time candidates — many of them women — who decided to run for office because they couldn’t sit by and do nothing. First she started an Indivisible-like local action group, New York’s 2nd District Democrats. King refused to meet with those activists in town halls, saying they would “scream” at him. He was felt that appearing on national television and taking meetings with “supporters and opponents of Obamacare” in his office was an adequate substitute for meeting publicly with the constituents who pay his salary. Liuba disagreed so she stepped up to offer an alternative. My Indivisible chapter endorsed Liuba, so a few of us set out for Long Island to do our thing. 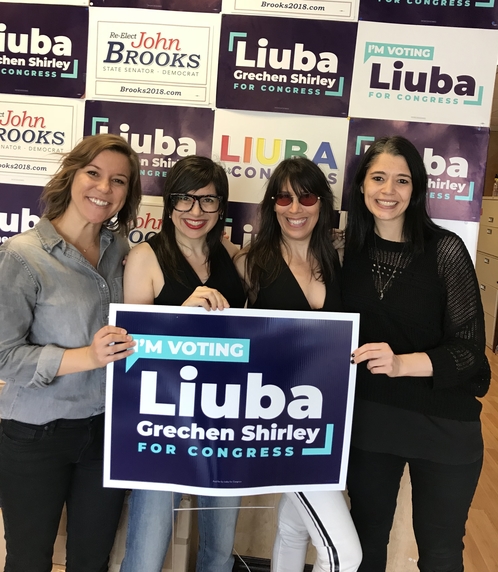 Lindsay, me, Stacy, and Nicole in Liuba’s campaign office.

I am generally uncomfortable talking to strangers, so if I can do this, you can too! (I try to look at it as I’m never going to see them again so if I have an awkward moment, who cares?) All you have to do is take that first step, the way one of my fellow canvassers did recently. She’d been feeling overwhelmed by everything, so she decided to stop by the “Blue Wave Festival” a group of activist chapters had in Brooklyn a few weeks ago. There she met one person from my Indivisible chapter, who invited her to our next meeting. At the meeting, we announced our canvassing plans and lo and behold! She was out on Long Island, making a difference. That first step leads to real action so quickly.

If you live anywhere in New York City, you too are welcome to come to my chapter’s meetings. The next one is on October 11, and you can find the information here. I also encourage you to sign up as a member in order to get my weekly action newsletter by email. I promise I won’t spam you — the only emails you get are about meaningful actions to take. If you don’t want to get an email, you can read the newsletter here. Check out this week’s newsletter right now, and pick one thing to do. You’ll be happy you did.

You might also like
Someone Fell Down on the Job
Free for Protestors: Purrkoy the Pussy Art
What's New at Barneys
Previous Post: « The Week in Review
Next Post: Register to Vote, Or I’ll Tell Madonna »