I have two vintage Stephen Sprouse skirts, as I mentioned in Wednesday’s rap-tastic YouTube video. I shared pictures of my frequently worn pink Sprouse skirt yesterday. Here’s my “Rock Sticker” skirt, as I styled it recently. 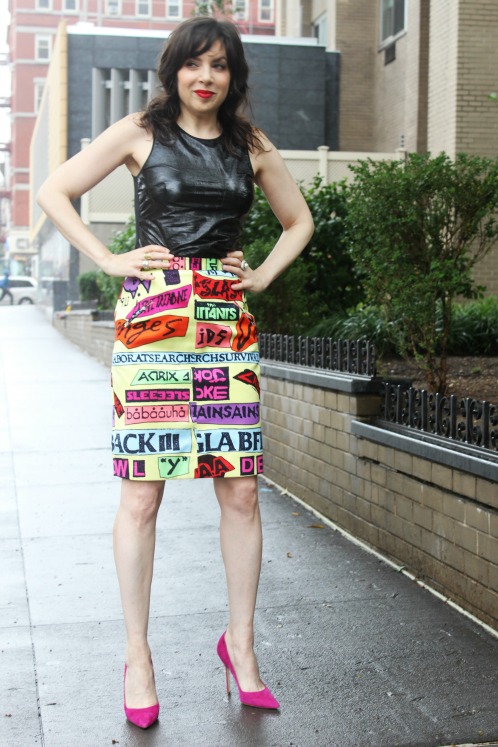 I’m smirking in this photo because I know how badass it  is to pair those DayGlo pink shoes with that skirt! Nah, I’m kidding. That’s the expression I have when I think, “It’s starting to pour and I’m wearing a leather top, an important vintage skirt, and suede shoes. Help me.”

I’ve had this Sprouse skirt for over 10 years, but I can’t find any old photos of me wearing it. (There’s one of it on the floor!) I know pictures were taken, because one of them was so unflattering that I had Jean of Ghost Tailor sew up the original slit in the front and open up a slit in the back. Maybe I never saved any photos because of that. Or maybe there’s some on an old computer. I’ll have to keep looking.

If you search for “Stephen Sprouse Rock Sticker” on Poodle, you’ll find a remarkable number of (expensive) styles in this 1988 print — jackets, skirts, sequin-covered dresses. The Metropolitan Museum of Art’s Costume Institute has a pair of tights and what is described as a dress, though I keep thinking it might be a romper.

I’ve always felt like this collection was overproduced. Like I said in my video, Sprouse was one of those fashion guys who went in and out of business. He had filed for bankruptcy in 1985, and 1988 — the “Rock Sticker” and “Harcore” year — was supposed to be his big comeback: He had an investor, opened a store, and started selling wholesale.

Sprouse was out of business again by 1989.  “We were too crazily, overly ambitious,” his investor, Andrew Cogan, told New York Magazine for a story that ran after Sprouse’s death in 2004.  In the ’80s, Cogan was in his mid-20s. His father, Marshall, was chairman of GFI/Knoll International Holdings Inc., described by the New York Times in 1986 as “a $2 billion privately held concern that manufactures and distributes products for the automotive and home building industries.” To me, that looks like a classic kind of doomed fashion investment. I’ve seen it a lot: people who are taken by the industry’s glamour; don’t necessarily have related experience; and lack an all-consuming personal connection with the designer. Certain designers need what can best be described as a business-minded soulmate: a Robert Duffy (Marc Jacobs), a Pierre Bergé (Yves Saint Laurent); or a Jenny Meirens (Martin Margiela). These are partners who are spurred on by passion to figure out ways to finance their designers’ most extreme artistic visions. They neither cut off the funds in order to force the designer into unprofitable mediocrity, nor do they spend money so heedlessly that the bank account is swiftly drained. Even when Duffy and Meirens kept Jacobs and Margiela afloat by negotiating deals with LVMH and Hermès, respectively, they were there to take care of the corporate relationship. Business soulmates are ride or die when it comes to their designers.

If you’re interested in the 1980s pop-culture scene, Sprouse — for all his ups and downs — was at the center of fashion, music, and art. Here’s some recommended reading/viewing: